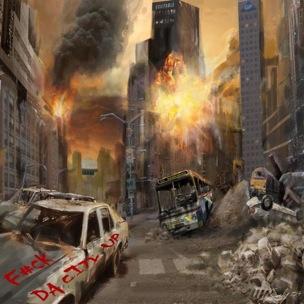 T.I. sure is convincing when explaining his run-ins with the law. Like that time at the end of Paper Trail’s “Ready For Whatever” when he cops to weapons charges then brashly exclaims, “You know I’m smarter than you, man,” only to return to lockup again the following year on drug charges. “First trip to prison a lesson / Second was just a nuisance,” raps a recently uncaged King on his latest mixtape, “Fuck Da City Up” (the track: “I’ll Show You”

featuring Pusha T). “Peckerwoods beefing with me / They want my neck in a noose / Cause they see the nigga’s influence / Luxurious and affluent.” There’s such conviction, such ferocity in those three bars that it’s nearly impossible not to sympathize even if he’s kinda painting himself as the victim of a conspiracy. When T.I.’s in his lyrical zone, he’s one of Hip Hop’s most captivating emcees. Throughout “Fuck Da City Up,” he sounds supremely motivated.

“In A Nutshell’s” fly-rhymes exhibition impresses with a dexterous flow and assonance onslaughts like, “The machine’s out front / In the valet, not the alley / And my Ballys crackin’ bitches from the Valley out in Cali,” over Will’s high-hats and blippy electronic intonations. Both he and B.o.B treat “Piss’n On Your Ego’s”

organ-rattling bass line like their own lyrical toilet. Or as The King of The South spews with style, “Defecating on your pride / Make you commit suicide.” You can almost see the dollar bills peaking through the G-strings on the strip club-ready, “P.I.M.P.S.,”

featuring Pimp C and Too $hort. You can almost imagine one-time in the distance snapping photos of the drug deal going down like Herc and Carver from The Wire on “Harry Potter.” Dr. Dre, Young Jeezy, Nelly, Pusha T, DJ Drama, Mannie Fresh, Just Blaze, Toomp, Meek Mill make “Fuck Da City Up” feel like an event, and lyrically T.I. is nearly hater-proof.

But at 19-tracks, “FDCU” is long. And since it’s largely a three-topic offering – whips, ballin’, pimpin’, repeat – it feels even longer. Redundant, even. There’s very few narratives, very little diversity. Somehow there’s 16 different producers and still very little sonic creativity. Every beat seems to strike the same chord, and after an hour and twelve minutes, inevitably end up reveling in redundancy. It’s not enough to derail the entire project, but still too much to avoid frequently reaching for the “Skip” button.

Fortunately, this mixtape serves as a buzz-builder for T.I.’s official return to music later this year with Trouble Man. Several joints sound like possible throw aways from previous LPs. “This Time Of Night” featuring Nelly and “Popped Off”