We hate to be the bearers of bad news, but if you’re listening to Snoop Dogg and Wiz Khalifa to hear that “realness,” you’re asking for disappointment. “Deep Cover”

was a long time ago, and much of Snoop Dogg’s time these days is on reality TV. Wiz Khalifa’s mixtape fodder still handles business, but Rolling Papers was chockfull of poppy tunes. The film that this disc is the soundtrack for, entitled Mac + Devin Go To High School, features each of them portraying weed-smoking teenagers, despite Snoop turning 40 years old this year. It’s clear that Snoop and Wiz are doing this to have fun—and if listeners can eschew any steep expectations based on earlier catalogs, they’ll have a good time as well.

The subject matter for Mac + Devin is predictably about weed, high school-themed topics, and more weed, but the execution separates it from other marijuana-fueled projects. Despite the duo corralling a diverse set of producers that includes the likes of Drumma Boy, Warren G, Jake One and Nottz, the backdrops all offer their own variation of the album’s vibe of a carefree smoking session. Snoop Dogg and Wiz Khalifa take an unabashedly style over substance approach, with their verses serving as breathy, melodic placeholders between the album’s silky soundbeds and catchy choruses. Before the experience gets too monotonous, it’s over—the album rounds out in less than 50 minutes.

Admittedly, Wiz and Snoop have made better music throughout the course of their careers, and they’re immensely more talented than they show here. They don’t offer any memorable lines, concepts or storylines, which is highlighted even more than Curren$y’s effortless balance of style and substance in his guest appearance on “OG.”

But it was likely a good idea for the duo to stay in their lane with this album, because it falters when it tries to do more. The poppy Smeezingtons backdrop and Bruno Mars chorus of “Young, Wild & Free”

confirms loyalists’ worst fears, and the sleep-inducing “World Class” comes across as the stock introspective song with its empty rhymes about morality and goals.

Aside from its two missteps, Snoop and Wiz’s Mac + Devin Go To High School is a surprisingly enjoyable listen. If hopes for their musical all-star years can be abandoned for their new places, this would fit right in with any easy listening rotation. 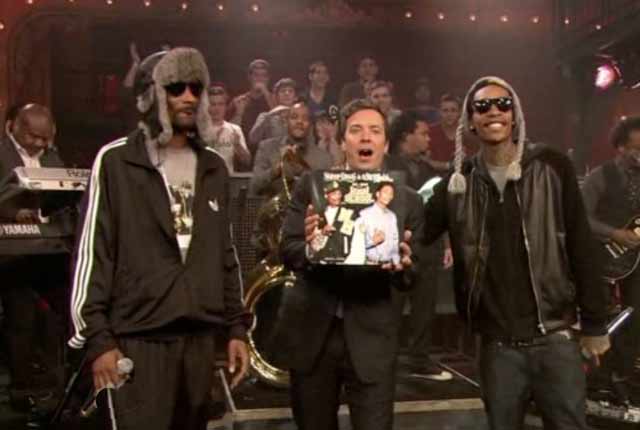