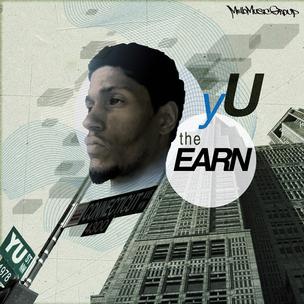 Many fans, artists and critics are quick to speak against much of Hip Hop’s materialistic, flossy rhymes in today’s current economic climate. But having music that speaks against those ideals isn’t enough to truly make a mark. Such convictions have to be just as lyrically and sonically compelling as the mainstream tunes they criticize, and their identity needs to stand for something just as much as it’s standing against the rest. With his solo debut Before Taxes and his contributions as a member of Diamond District in the group’s album In The Ruff, yU has proven a picture perfect illustration of how to do so. With his sophomore set The Earn, he continues his winning streak.

After the success of his solo debut Before Taxes, yU asserts on his intro that he’s “out to earn.” But he isn’t just out to stack paper; after all, on the title track, he quips, “this heart of mine is out for more than just a dollar sign.” Instead, he speaks about the dedication required to earn what he needs: peace of mind, the price of sticking to his beliefs, support from and for his family, and more. His honesty, stylishly blunt punchlines (“I rock the truth like it’s a jewel from Jacob, ya boy”), and distinctive D.C. drawl deliver his message crisply. Sonic goodness from the keys and woodwinds from he and Slimkat78’s jazzy, earthy soundbeds help it go down even smoother. “I can’t feel what you’re saying, cuz the balance is off/fakin’ like you don’t have a heart with all the violence you talk,” he quips on “If U Down.”

He couples braggadocio with a rundown of his principles on “Bonafide,” and he works to grow as a person on “Better Man.”

The album gets even more interesting when yU continues its theme into more evolved concepts. Armed with a soulful backdrop, he uses “Time Machine” to rewind the clock and imagine his father working construction as a teenager to earn a living, before flashing forward to show his parents’ influences on him today. “Money (the Ahh Yeah)” displays the historical evils of currency while a chorus insists its necessity, and he uses “First” to illustrate the importance of laying a foundation to his life and his career. On one of the album highlights, “Blind,”

yU uses the metaphor of a man who can’t physically see who looks at things beyond their surface appearance.

The Earn has flaws, but nothing that ruins its songs. An out of place cameo of spoken word poetry on “Write On” blemishes an otherwise potent look at music’s importance in his life, and the uptempo vibe of “Even If” sounds out of place with the rest of the album. Some listeners may also find yU’s consistent mission statements of his beliefs as preachy. But the rhymes and the beats are correct on every song on The Earn, and whenever he speaks against something, he offers an alternative. As a result, yU continues to earn his keep.