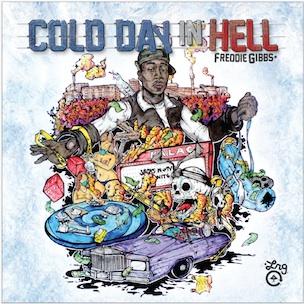 Unlike so many of his peers, Freddie Gibbs has proven that he doesn’t need anybody’s help to succeed. The Gary, Indiana emcee has found more acclaim on free projects like 2009’s two-piece The Miseducation of Freddie Gibbs and midwestgangstaboxframecadillacmuzik than he has with more recent retail experiments like the feature-heavy Str8 Killa EP and 24-hour-sketch Lord Giveth, Lord Taketh Away with Statik Selektah. Now with a CTE deal, Young Jeezy‘s profile player brushes off his original blueprint, and waxes O.G. wisdom under the age of 30. Cold Day In Hell is an assuring reminder than Freddie Gibbs’ inspirations might bare rust, but this emcee is oiled and polished for the big stage.

“Barely M.A.D.E.” is a great opener to show where exactly Freddie Gibbs’ head is at for Cold Day In Hell. Here the emcee recalls his early-twenties Midwest hustling exploits with proclamations like, “Baptized in a lake of fire, so this how hell feels.” The fearless rapper uses this opportunity to show the listener that his starving years are still his motivation, as his convictions to succeed won’t buck towards trends or easy-ends. The same end of life imagery carries through to “Heaven Can Wait.” Freddie looks at how he would spend his last day on earth, comparing the hypothetical chain of events with a first day out of incarceration. That same criminology inspires “Rob Me A Nigga,” with Alley Boy. This unveils the mind-state of a premeditated robbery, with tongue-in-cheek explanation of the violent sociology found in streets like Gary, with longtime associates seeing past commonalities in pursuit of paper and power.

Like Str8 Killa, Gibbs uses some minor musical experiments to signify stamps in his growing career passport. “Menace II Society” with Dom Kennedy and Polyester, chronicles Freddie’s assimilation in West Coast life, with a common interest in women and weed, yet still refusing to tuck chains or tail in a land of colors and fierce territoriality. “Let Ya Nuts Hang,” with CTE label-mate Scrilla, cements Gibbs’ fit in the Trap Muzik sound. “Doin’ wrong is my rite of passage,” declares Gibbs as he makes a song about taking ownership of a block, and surrounding defenders at all entrances and exits for pole position. Arkatech Beatz supplies a track that has the Jeezy/T.I. sound, as Gibbs’ Midwestern flow does adapt, but takes the synth-driven track by force. The actual Jeezy-assisted track, “Twos and Fews” is one of several recent collaborations between CTE founder and star signee, but the mainstream chorus and the vesres make for one of the less interesting moments on Cold Day In Hell, despite the fanfare. “Str8 Slammin'” with Three 6 Mafia‘s Juicy J is a more organic pairing with a platinum star, with a SMKA beat that truly sounds Hypnotized. The message might be limited to debauchery and survival, but its presentation is so convincing that the engaging listen rarely wavers.

Now a passenger on private jets, Gangsta Gibbs is still making music for box-frame Chevys with packed kick-panels. Cold Day In Hell is the definitive mixtape fans have been asking for. With his Interscope recordings unveiled, a plethora of powerful songs since and a restless catalog of verses, videos and features, this tape is very telling of the type of album Gibbs has made before, and now has the Corporate Thugz in his corner to see it through.