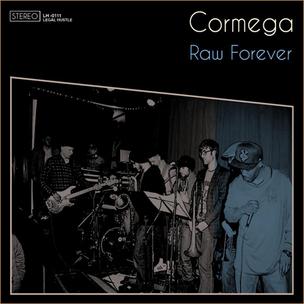 It’s a little hard to believe that it’s been a decade since Cormega’s classic The Realness was released. Since then he has seen nearly every up and down that the typical rap career goes through – a little bit of beef, a little bit of reconciliation, some label drama, and an effort to do something besides music (in his case start his Legal Hustle record label and put out a DVD). So what’s left? Naturally a decade’s worth of music is finally worth a greatest hits compilation, and being backed by a live band is always fun, so Cormega has decided to give his fans a 2-disc project that tackles both at once.

The resulting Raw Forever is unpredictable. On one side of things there’s nothing new to see – Corey’s greatest musical moments are narrowed down to eleven tracks and grouped together for a trip down Queensbridge memory lane (included are “Get Out My Way,” “The Saga,” and “Dead Man Walking,” among others). But the other half of the LP is where the surprises are. Cormega’s trademark monotonous delivery style isn’t something that in theory would be guaranteed to mesh well with a live band, but in actuality it comes together with the sounds of The Revelations (of Wu-Tang Chamber Music fame) surprisingly well. As if that wasn’t enough of a stretch, Cormega also decided to try something new by neglecting to name each track on this portion of the album, instead settling for a Roman numeral corresponding to each song’s placement in the track list to serve as a name for the song. It’s neither a good or bad thing, really, but it will likely prove to be an inconvenience for anyone wishing to discuss the album, as all they have to reference songs with is numbers.

With more than enough experience under their belts, The Revelations provide instrumentation polished enough that most of the album listeners may forget that the beats came from people playing instruments rather than a producer chopping up samples. It’s really only obvious on tracks such as “IV” featuring Sha Money XL and Maya Azucena which is actually a remix of sorts of the Nottz-produced “What Did I Do”

from Cormega’s 2009 release  Born and Raised. Brooklyn songstress Azucena sounds fantastic picking up the vocal side of things, however the instrumental adaptation of the original sample is cumbersome and begins to drag a bit. Also slightly disappointing is the inclusion of two instrumental-only tracks (the closers – “X” and “XI”). Though The Revelations deserve their time to shine, with only eleven tracks of new sounds for fans, diminishing Cormega’s presence to only nine of them is underwhelming.

Standouts include “I,” the introductory track, showcasing Cormega wasting no time getting deep as he touches upon envy, friendship, and more with lines such as “especially when you on and he wish it was him, in the position you in, that’s when the resentment begins.” Queens comes together on “VI”

featuring AZ and Nature, a refreshing offering, while Cormega reminds people that “Corey about making money no doubt, only time I chase the past is when Jordan’s come out.”

Perhaps the best thing to come out of Raw Forever is the potential for an incredible live show from Cormega, with The Revelations as backup and the features such as Lil Fame of M.O.P., Tragedy Khadafi, Kool DJ Red Alert, Havoc, and more coming through for guest appearances. With the live band fueling a different context for Cormega’s lyrical style, Raw Forever is still worthy of a purchase from the Queensbridge emcee’s many fans, but it may not be enough new material to leave them fully satisfied.

Additional note from the writer: HipHopDX doesn’t usually rate “Greatest Hits” compilations. Though revisiting Cormega’s catalog is always a welcomed task, one has to wonder where “Love In Love Out” is. What about “Fallen Soldiers”? “Thun & Kicko”? Though we might not have gathered up the same eleven tracks if provided the task, we’re still not mad at the selection.