DJ Khaled - We the Best Forever 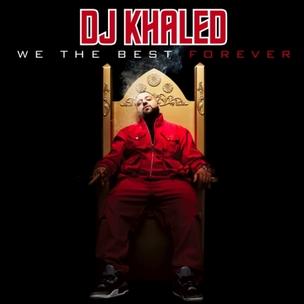 took over the airwaves, and just when people began to tire of that, the second single “I’m On One”

with Drake, Rick Ross, and Lil Wayne came along to remind everybody that Khaled was not playing games. By the time the album was ready to drop, the third single “It Ain’t Over Til It’s Over”

with Mary J. Blige, Fabolous, and Jadakiss made its way into radio rotation with its signature “P.S.K. What Does It Mean?” drum pattern and the catchiness one expects from Khaled that makes listeners remember the song.

We The Best Forever’s fourth, yes fourth single, the motivational “Legendary” featuring Chris Brown, Keyshia Cole, and Ne-Yo seems poised to make the same type of impact as the album’s previous singles, despite rappers taking a backseat and singers reigning supreme. Keyshia’s crooning words, “everybody’s gonna fight, and everybody’s gonna fall, but it’s the ones who get up who are always the strongest, I can’t imagine if I never went through nothing, I wouldn’t be a fighter, and I wouldn’t last the longest,” are a direct representation of the work ethic Mr. We The Best exhibits, as he never seems short on hits and definitely moves with key players in the game.

So how do the rest of the tracks stand up to what the masses already know to be successful? Well, this is where We The Best Forever falls short. Content-wise it’s monotonous. Yes, the lineup of emcees is diverse and impressive, yet most of them have a reputation about rapping about a bunch of the same things – the streets, hustling, women, cars, etc. (read: Young Jeezy, Ludacris, Ace Hood, Meek Mill, Vado, Birdman, Akon, etc.). Luckily each emcee’s lyrical style is different enough that the album never feels boring, but if one is looking for variety in subject matter, this isn’t the place. We The Best Forever is about having the flyest women, the hottest cars, pushing the most product, and pretty much making sure everyone knows you’re going to be the best. Forever.

DJ Khaled lives up to his reputation on We The Best Forever, coming through with an all-star lineup of artists and producers (including Lex Luger and Boi-1da), creating high quality Hip Hop poised for chart success, and making sure the final product is street enough to not be viewed as pop. And though anyone who listens to Hip Hop radio already knows the words to almost half of the album, tracks such as “Money”

(Ludacris and Young Jeezy over a Lex Luger beat) and “Sleep When I’m Done” (Game, Busta Rhymes, and Cee-Lo over Danja production) will provide enough high quality content to justify purchasing the whole album. At this point listeners are either down with his movement or they aren’t, and while We The Best Forever is a solid piece, it’s not different enough from his previous work to change any minds about him. But with emcees ranging from Jadakiss to B.o.B., there really is a little something on his latest LP to satisfy just about anyone who enjoys mainstream Hip Hop.