Dom Kennedy - From the Westside With Love II 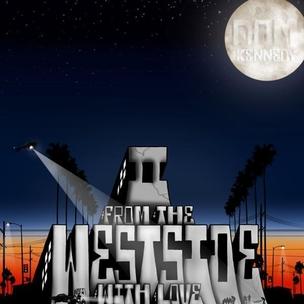 With love on my mind and fire in my heart, they can never take us apart…

From its inception, West Coast Hip Hop has been known for providing chill out soundtracks. Anything Snoop Dogg and Dr. Dre is the epitome of a summertime drive – mind on the money and money on the mind. Leimart Park’s own Dom Kennedy has been a longtime contributor to the summer breeziness of West Coast music. His latest album, From The Westside With Love, Part II, is his first official release on iTunes.

From The Westside… opens with “Dom’s Prayer,” on which he prays for safety and family, in addition to forgiveness for fornication. The track closes with a dreamlike acapella interlude and a haunting refrain: “Catch me when I fall.” He delivers a laid back Cali flow on “Grind’in,” juggling the paper chase with the corner stoop chill out.

The album shines when it takes an old school turn. “When I Come Around” has an Alexander O’ Neal and Cherrelle’s “Saturday Love” (pre-BET Awards, of course) flow. The carefree vibe recalls Friday, as Ice Cube and Chris Tucker sit on the porch, watching Nia Long run by. “O.P.M.” also has rollerskating jam groove to it, as Dom provides the definition of a true budget baller: “We spending O.P.M., Other People’s Money.” He takes a cue from Snoop’s “Sensual Seduction” on “The Ways.” The hand clap beat perks up the track, making it a potential club hit.

No summer album would be complete without some songs for women. On “Come Over,” Dom spits his game: “11 minus 1, yeah she a dime for real.” With “She Ain’t In Love,” the gold diggers get the ultimate kiss-off. But those are probably the girls who would rock the “I Love Dom” tattoo he encourages on the mellow-laced track. “Dream To Me” samples Anita Baker’s “Angel,” an ode to dream girls and perhaps his first true love, the stage.

Dom gets some assistance from Big K.R.I.T.: “2 miles per hour, so everybody sees me.”

On his first major release, From The Westside With Love, Part II, Dom Kennedy is poised to blaze the mainstage, while staying true to the streets of Leimart Park.