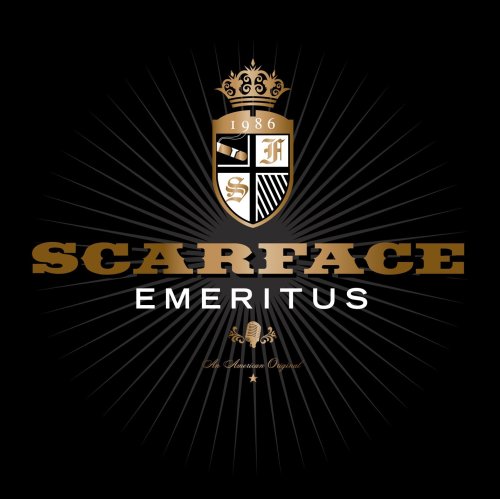 Rap legends don’t always age well. This year has been an excellent example of that, as fans got to watch LL Cool J drop a half hearted attempt to disheartened fans. But, sometimes, legendary emcees can break out of that and continue dropping well received projects, exemplified in ’08 by Ice Cube‘s [click to read] Raw Footage. As the year draws closer to an end, another iconic figure in rap is out to show that age has nothing to do with skill. As the title boldly suggests, Emeritus is Scarface‘s [click to read] effort to prove he can downright out rhyme students, even as a professor ready for retirement.

Throughout his celebrated career, ‘Face has been praised for his lyrical dexterity, flooded with candor and emotional depth. While Emeritus fails demonstrate lyrics as personally revealing as past album opuses, the LP showcases much of why he is exalted for his calmly recited rhymes, which range from confrontational to thought provoking gangster wit. The Bun B [click to read] and Lil Wayne [click to read] collaborative effort “Forgot About Me” [click to listen] shows he can spit with some of today’s favored emcees. Later, “Still Here” and “Soldier Story” display the infamous block insight ‘Face is known for, while at the same time proving he can still shock with controversial messages. It isn’t all great, though. “Who Are They,” and “High Note” demonstrate a smooth player with bland lyrics that sound forced. There is also a tiring campaign against snitching that becomes overwhelmingly overused by the finale. Still, the climax of the album appears courtesy of the title track, which boasts bravado only men of his status can spew.

I’m the president, the don, the boss of all players.”

With lyrics that are thought provoking, shocking and passionate, it’s hard not to understand why his rhymes have been lauded for years. It may be missing some of the more powerful depth, but the rhymes still pack a punch.

While his lyrics may be daring and consistent, the instrumentation to back him is not always the same. Musically, the album finds breaks in cohesion. From the bouncing drums on “High Powered” [click to view] to the soul of “Still Here,” the changes in production become an obstacle to the album’s overall flow. While the versatility is a plus in some ways, there is often a lack of solidity from track to track. The Bilal-assisted “Can’t Get Right” [click to listen] and “Unexpected” add a West coast vibe, and the South is, of course, also represented (“We Need You”). Weak beats like “It’s Not a Game” take away from ‘Face‘s delivery and create pitfalls for the LP’s lasting quality.

The most disappointing part of the album is that it will be Face‘s last, yet it doesn’t feel like it. There is no send-off and no real feel of a final run through a genre he helped establish and mold through the years. Scarface is a legend to many and certainly an iconic symbol for Southern Hip Hop. But, Emeritus doesn’t stand out much and it plummets in quality due to some lackadaisical tracks (i.e. “High Note”). While there are some quality-filled tracks on the album, there isn’t much to highlight as extraordinary or on par with Face’s stature. Simply put, Emeritus is a fine addition to his catalog, but it doesn’t do this professor the justice he deserves.