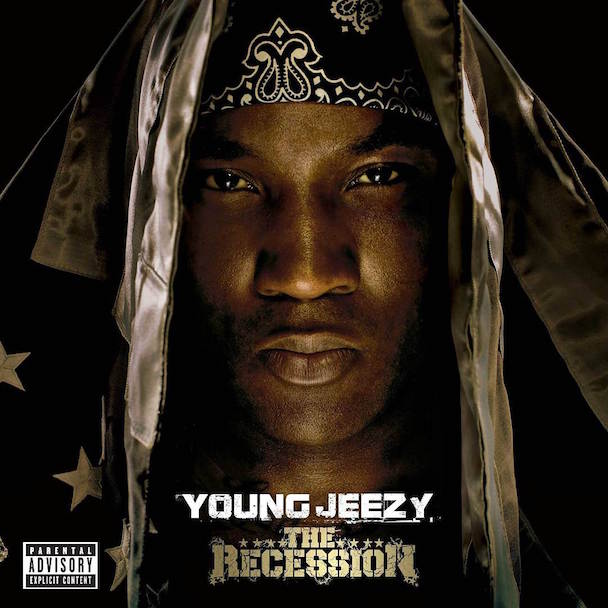 Predictability is a gift and a curse. On the positive side, expectations from an artist as predictable as Young Jeezy [click to read] are relatively simple – low on lyrics, high on charisma and beats. Simple isn’t necessarily a bad thing – good music is good music, and if Master P was able to deliver some, there’s no reason to expect Jeezy cannot as well. However, expectations are expectations; no matter how simple they are, if they aren’t met, disappointment is imminent. The Recession perfectly illustrates this double-edged sword.

The Recession starts off with a track of the same name, backed by a blazing beat worthy of a trademark Ludacris [click to read] intro. Jeezy, although not nearly talented as his fellow Atlanta denizen, manages to parlay the “ghetto Horatio Alger” image he’s carefully cultivated over the years with ease. The swagger continues into “Welcome Back” [click to listen], which has Jeezy talking some street, threatening any and all who stand between him and his gwap.

In terms of emceeing, there’s little to surprise or delight. This isn’t really a problem, as no one really expects much from Jeezy in that department. He’s admittedly learned to ride beats a little better than before, and makes a notably greater effort when accompanied by a better emcee than he. Case in point: “My President” [click to listen], featuring Nas. While it’s no question that God’s Son completely outclasses him, Jeezy plays his part and delivers some enjoyable verses: “Woke up this morning, headache this big/Pay all these damn bills, feed all these damn kids/Bought all these school shoes, bought all these school clothes/For some strange reason, my son addicted to polos…Street Dreams tour, I showed my ass in New Orleans/Did it for Soulja Slim, brought out B.G./It’s all love, Bun, I’m forgivin’ ya Pimp C/You how the Pimp be, that nigga gon’ speak his mind/If he could speak down from Heaven, he’d tell me to stay on my grind” The collabos aren’t all great, though, as Lil Boosie‘s grating cartoon-sounding voice completely ruins the harmony Anthony Hamilton builds in “Everything,” and Kanye West continues the horribly irritating vocoder trend on “Put On” [click to listen].

While it’s probably fair to say the The Recession is Jeezy‘s best lyrical outing, it’s still far and away not a selling point. Simply put, he could only have gotten better. It’s unfortunate then that the typical selling point for a Young Jeezy album – the production – fails by and large to deliver. “Welcome Back” and the five tracks that follow it are so similar in production, it’s difficult to notice when one ends and the other begins if you’re not paying close attention. And no, that’s not “cohesiveness” – it’s a lack of variety. “Who Dat” boasts a laughable musical backdrop, sounding like something thematically from a nursery rhyme. It isn’t all negative – the aforementioned beats do bang, and “Circulate” [click to listen] flips a really dope sample over some tribal-sounding drums. Other winners are “Don’t Do It” and “Word Play” [click to listen], which provide welcome departures from the tired drum patterns Jeezy tends to favor.

The Recession is more or less the same old Jeezy. Fans will likely take little notice of the minimal strides he’s made as an emcee. It’s just not that important on this type of an album. What people will notice, without a doubt, is that Jeezy‘s usually fantastic beat selection has managed to provide a relatively unspectacular musical palette. Still, Jeezy‘s still having fun making music, and if you just accept it for what it is, chances are you’ll  end up having some fun with this one too.