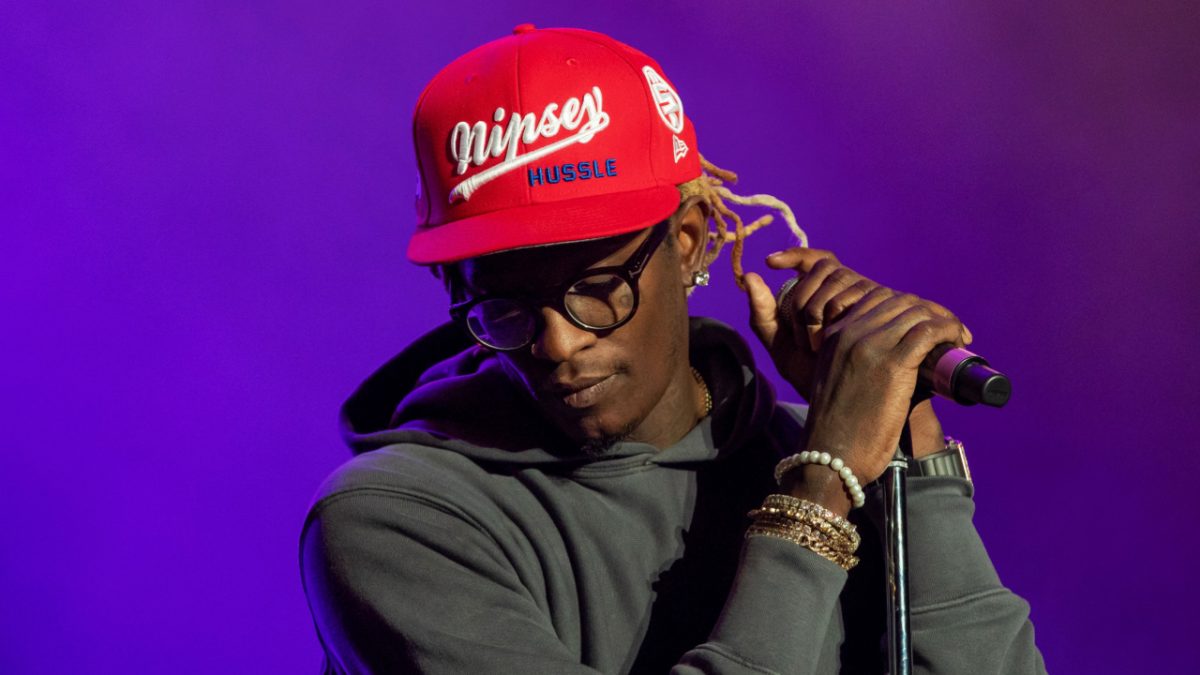 Young Thug and one of his co-defendants in the YSL RICO case have been accused of delaying the jury selection process by exchanging drugs while court was in session.

A motion filed by Fulton County District Attorney Fani Willis on Thursday (January 19) details the moment during which Khalieff Adams allegedly handed Thug a single Percocet pill in the middle of court proceedings on Wednesday (January 18).

“Defendant Kahlieff Adams stood up from his chair inside courtroom 1c and walked unattended to where defendant Jeffery Lamar Williams aka Young Thug was seated at counsel table next to his attorney,” reads the motion, which was shared on Twitter by an account dedicated to updates on the trial.

The entire incident was captured on closed-circuit cameras inside the Fulton County Superior Courthouse.

more Percocet pills and marijuana, wrapped in food seasoning to hide the smell. He was taken to the hospital because he attempted to ingest some of it.

This was all caught on video.

Prosecutors are using this to blame Thug (and Adams) for the delay of jury selection.

A Fulton County Sherriff’s deputy immediately approached Young Thug and asked him to open his hand to reveal what he had received from Adams, who also goes by the name Bobby Hunt. After recovering the pill from Thugger, the deputy approached his co-defendant to search him.

Kahlieff Adams attempted to resist the search. However, authorities were able to recover additional Percocet pills, marijuana, tobacco and other unspecified contraband hidden on his person. The items had been wrapped in plastic and food seasoning to mask the cannabis smell, court documents stated.

According to the DA’s motion, Adams, who had been seated in the gallery ahead of the exchange, was transported to nearby Grady Memorial Hospital after ingesting some of the items he had been concealing.

“For accuracy, the record should reflect that defendant Williams’ (along with defendant Adams’) actions caused a delay in the trial,” Willis wrote.

The document opened by reminding the court that Young Thug has “filed multiple motions demanding a speedy trial, opposing a continuance of any kind and alleging prosecutorial misconduct for one reason or another.”

Willis and Deputy District Attorney Adriane Love, who also signed the motion, did not indicate whether additional charges would stem from the incident. Instead, they asked Chief Superior Court Judge Ural Glanville to enter their complaint as a “finding of fact” that the two men had caused a delay in the judicial process.

As a result of the disruption, Wednesday’s jury selection hearing was adjourned early, which prevented the court from considering any juror hardships — requests by potential members of the jury to be excused due to any physical or financial issues that might arise as a result of their participation in the court case, which is expected to last up to a year.

In an interview with WSB-TV on Thursday, shared via Twitter by reporter Michael Seiden, Young Thug’s lawyer Keith Adams maintained his client’s innocence.

This is the second time a defendant in the ongoing YSL trial has been accused of attempting to smuggle contraband.

An attorney (Keith Adams) for Young Thug responded to the allegations that his client was involved in the drug deal.@wsbtv pic.twitter.com/LEhNvFhbKX

According to reporter Jozsef Papp, who is covering the trial for the Atlanta-Journal Constitution, Judge Glanville paused the jury selection process for Young Thug’s trial on January 13 to inform attorneys on both sides of issues pertaining to two of the rapper’s 13 other co-defendants.

“Judge Glanville just announced that there is going to be an investigation after someone brought clothing for one of the defendants with contraband (marijuana) in the shoes,” Papp tweeted. “Glanville said one of the defendants also refused with cooperating this morning (taking a shower and getting dressed) and defendants during transport yesterday were causing problems.”

So far, Thugger’s trial has seen more than a handful of hiccups. On the fifth day of jury selection, Young Thug’s lawyer Brian Steele claimed that another potential juror in his client’s ongoing RICO case attempted to reach out to him via email. While the contents of the message weren’t disclosed during the hearing, it was enough for the judge to order an investigation.

Another potential juror made headlines last week when it was reported that she had being ordered to write a 30-page essay after skipping jury duty in favor of a vacation to the Dominican Republic, per WSB-TV.

The jury selection process was also halted around 12:30 p.m. local time on January 12, as the city of Atlanta and all surrounding cities were put on high alert due to impending severe weather.

The decision to pause proceedings came after a Level 3 (out of a possible 5) warning was issued for all of North Georgia, as forecasters predicted damaging winds with speeds up to 60 MPH, and the possibility of tornadoes, 11 Alive reported.