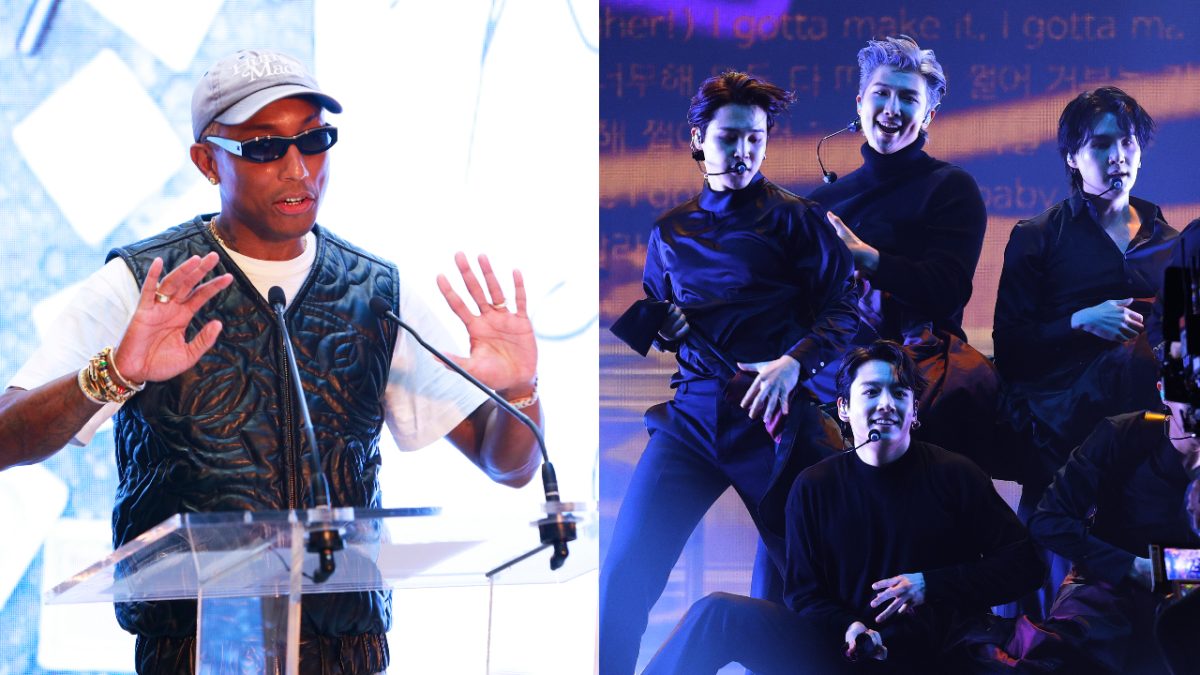 Pharrell & BTS Have An ‘Amazing’ Collab On The Way

Pharrell Williams has said that he and the K-pop band BTS have a song in the works.

In a new cover story for Rolling Stone, Pharrell announced his next project would likely be titled Phriends, and revealed that one of the songs to appear on the forthcoming record will feature the influential K-pop collective. Williams sat alongside BTS’s RM to discuss the partnership and said it was truly a special experience.

“You guys [BTS] are on there, obviously,” Williams said, “and I’m actually talking about this way more than I’m supposed to, but it’s a song from my album that [BTS] sang and it’s amazing, and I’m super grateful. Everyone that hears it is like, ‘Whoa.'”

“I fucking love it,” RM chimed in.

Elsewhere in the interview, RM opened up about the insecurities that come with superstardom and said he often questions whether he deserves all the fame he’s gotten. Pharrell empathized with that and said that was a partial driving force behind his extensive charity work.

“I mean, the [charity] work that I do, there’s always a circumstance,” he said. “Either I’d say some dumb shit and then regret it later, or there’s been a time when I have a record that sort of affected a certain portion of a demographic. So then it made me think about things differently.”

He continued, “And then I go set up a [nonprofit] and act against the ignorance that I was a part of. And educate myself, enlighten myself. Then other times, I also do it because of what you just said. When you ask yourself, ‘Man, am I good enough?’ Or, ‘Do I deserve all this?’ I think what makes it easier for me to sleep at night is when I go do that work. It helps answer those questions.”

Pharrell has been hard at work on the charitable front this year and has launched numerous initiatives to aid with a plethora of problems.

In September, he launched a new creative advocacy agency called Mighty Dream, which will exclusively create products that strive to aid marginalized communities in America. The agency will collaborate with big brands to bring these ideas to life, and will also be comprised entirely of Black and Brown creatives. They plan to speak on what issues they aim to tackle first at a corresponding conference in November.

Travis Scott & Pharrell Shoot ‘Down In Atlanta’ Music Video With Tyler, The Creator

Additionally, in June, Pharrell’s YELLOW nonprofit partnered with Cisco to provide educational technologies to marginalized students who want to start a career in STEM or the arts.

Known as the YELLOWHAB “micro-school,” it’ll be located in Pharrell’s hometown of Norfolk, Virginia, and will include smaller classrooms and more hands-on workshops so as to provide students with an immersive learning experience based on skill rather than age.

The partnership with Cisco will provide the micro-school with state-of-the-art technologies that can help students better learn these skills, and will include data centers and DNA Spaces as well as The Webex Suite, Secure X, WiFi-6 and Meraki.  Together these new tools will help kids remain inspired during their work.

“Let’s get rid of the old way of looking at children,” Williams said. “Our kids are not in education only to get off in the summer because we need them to go work in the factories. That’s not the world that we live in. The paradigm needs to shift. The public schools don’t have all the answers and the private schools don’t either.”