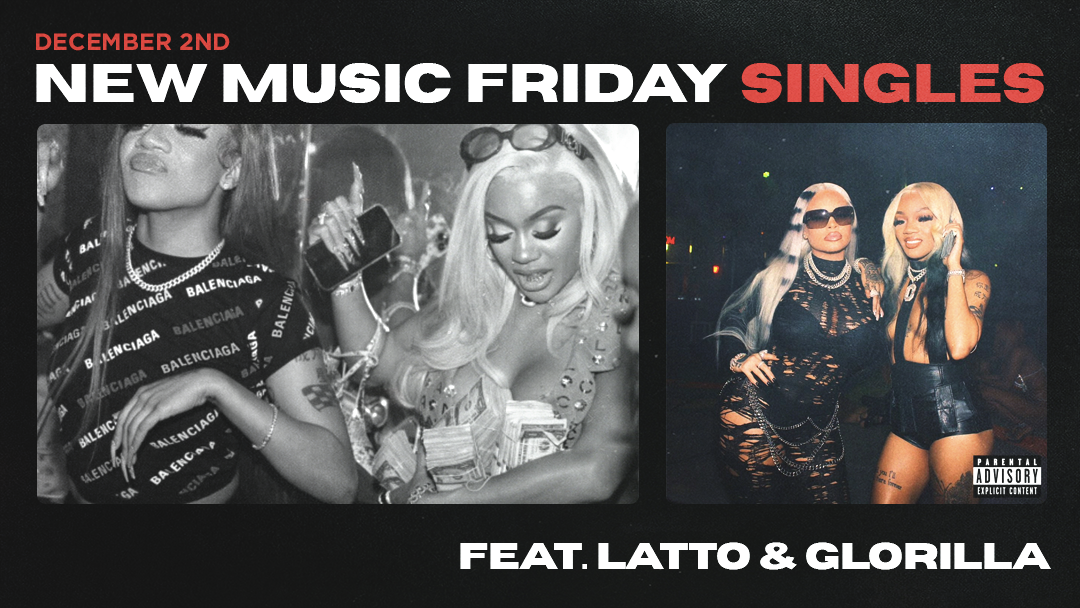 December has officially arrived, and while the cold winter months are now fully upon us, the Hip Hop and R&B world decided to come through this week with some fire.

Look no further if you’re stuck in a post-Thanksgiving malaise: there’s plenty of hits for all types of fans represented on this week’s edition of HipHopDX‘s New Music Friday.

Kicking things off this week are Latto, GloRilla and Memphis legend Gangsta Boo with their collaborative single “FTCU.” From there we head north to Harlem where we link with A$AP Rocky for his latest drop “Shittin’ Me.” Also included this week is the generational mashup of 21 Savage and Nas on “One Mic, One Gun,” Cordae’s “Feel It In The Air” and much more.

What’s getting your first spin this week? Let us know in the comments.

Latto, GloRilla and Gangsta Boo is an unexpected, but deeply welcome trio. Three excellent MCs, two from this generation and one from the era which helped pave the way, their most recent effort “FTCU” was designed to inject some heat into this December.

Latto, the hard-spitting Atlanta rapper known for hits such as “Big Energy,” also appeared on the remix to Glorilla’s ultra-viral “F.N.F. (Let’s Go)” alongside JT from City Girls. Meanwhile, Gangsta Boo’s been active of late, releasing “Big Momma” with Hannah Monds this past October.

For years now, A$AP Rocky has hardly been active in the rap world. One would have to go back to 2018 to find a new album from the New York rapper. And while he has dropped a couple of singles and features since then, namely “D.M.B.,” “Arya” with BAPE-founder Nigo and “Doja” with $NOT, Rocky has been relatively silent.

His latest single “Shittin’ Me” has just arrived and hints that there may be more to come from the “Sundress” MC.

One of the pitfalls of social media is that every misspeak or error spreads like wildfire, obscuring or even changing the intention of the person who originally spoke. 21 Savage can speak directly to this, as his comments about generational great Nas were blown out of context and were used in an attempt to spark a non-existent beef.

In an effort to combat the false narrative, Nas and 21 Savage came together for “One Mic, One Gun” a booming song of mutual respect.

Don’t let his age fool you: Cordae’s journey in Hip Hop may appear sudden, but it was really a strategic and concerted effort from one of the most hungry young rappers in the game.

After the release of Cordae’s From a Birds Eye View, which was met with mixed reviews, the former YBN member kept pushing his nostalgic sound with singles such as “Unacceptable” and “So With That,” as well as featured verses on songs such as Bazzi’s “Only Fan” and “Spinnin” with Dougie B and B-Lovee. Less than a month after his last verse dropped, Cordae is back with “Feel It In The Air.”

Coi Leray receives a lot of unnecessary hate in the Hip Hop landscape. Her music, known for its bouncy and playful feel, is often more well-executed than people give credit for. Take, for instance, the liveliness of tracks such as “Blick Blick” with Nicki Minaj or “TWINNEM.”

Leray’s latest offering “Players,” is a fun take on a classic sound, with the “No More Parties” rapper borrowing a sample from the famed “The Message” by Grandmaster Flash & The Furious Five, adding her own bubbly texture.

$UICIDEBOY$ – “My Swisher Sweet, But My Sig Sauer”

The vitriolic and angsty sounds of the $UICIDEBOY$ have been blending genres for almost a decade. Composed of cousins Ruby da Cherry and $crim, the New Orleans-based duo draws influence from a number of different sources, including the grime of Three 6 Mafia, heavy rock bands such as Korn, and more.

Their latest single “My Swisher Sweet, But My Sig Sauer” is an amalgam of their past work: hard raps over heavy, southern drums.