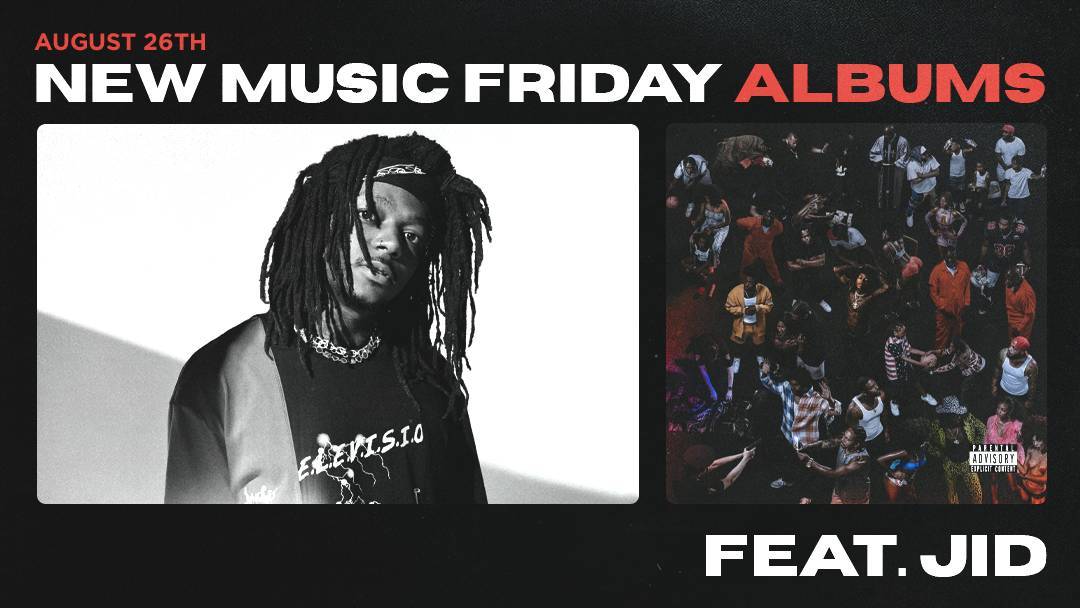 Summer is taking its last breath of the year and it seems that the Hip Hop and R&B world took that as a challenge to drop everything its been keeping in the vault.

Kicking off this week’s edition of New Music Friday is Atlanta’s own J.I.D, the bar-heavy rapper who has proven himself to be one of the most exciting members of the Dreamville roster. From there we head East to Miami and explore DJ Khaled’s latest effort GOD DID, the follow-up to last year’s KHALED KHALED.

Underground rap fans are sure to eat this week as legendary MC Roc Marciano linked with The Alchemist for The Elephant Man’s Bones and the elusive Mach-Hommy dropped a surprise project, Dollar Menu 4. Meechy Darko, one of the three members of New York rap crew Flatbush Zombies, has also dropped off his debut solo project, Gothic Luxury.

Other new albums of the week include Internet Money’s Dro Kenji with ANYWHERE BUT HERE, Lil Bean’s Waited My Turn and many more. Keep reading for the complete list and let us know in the comments what’s getting the first spin.

Watching J.I.D develop from a promising, burgeoning MC to a true force in the scene has been one of the more exciting narratives in Hip Hop over the last few years. His career truly begun to take off with The Never Story, an album which finds the East Atlanta rapper spitting alongside EarthGang, Mereba and 6LACK.

DiCaprio 2 raised his acclaim further, with songs such as “Off Deez” with J. Cole and “151 Rum” accumulating over 100 million streams each on Spotify alone.

The Forever Story has been a long time in the making. J.I.D has been mildly active, contributing verses to the Dreamville joint albums as well as Spillage Village, his collective which also features EarthGang, but otherwise has been relatively quiet.

A callback to his debut, The Forever Story showcases the growth J.I.D has undergone both as an artist and a person. His raps are tighter and more introspective and the beat selection is more diverse. Fans may have had to hold their breath for years biding time before it dropped, but The Forever Story proves the wait was worth it.

DJ Khaled is harmless and his intentions typically seem to be pure, but he still has stayed one of rap’s most polarizing figures. Nevertheless Khaled persisted, dropping GOD DID this week, his 13th studio album. Like anything the veteran artist touches, GOD DID is ostentatious and grandiose in scale.

Khaled has always had an innate ability to gather the biggest stars of Hip Hop and R&B for his projects, but GOD DID feels particularly impressive. Most fans are excited about the JAY-Z verse on the album’s title track, as well as Future and SZA’s joint effort on “Beautiful,” but be sure not to overlook “These Streets Know My Name” with Skillibeng, Buju Banton, Capleton, Bounty Killer and Sizzla, as well as “Bills Paid” by Latto and City Girls.

New York rapper Roc Marciano has been a mythic figure in Hip Hop since his 2010 debut Marcberg and has continued to release grimy, dusty projects such as Marci Beaucoup, Reloaded and now his latest, The Elephant Man’s Bones.

Working with longtime collaborator and legend in his own right, superproducer The Alchemist, Marciano’s most recent effort is a testament to consistency, a rap project which finds him spitting at his highest level more than 10 years since he broke onto the scene.

Spanning 14-tracks split between two sides, The Elephant Man’s Bones also includes verses and appearances from artists ranging from Action Bronson and Boldy James to Ice-T and Knowledge The Pirate.

Continuing to speak about elusive underground legends, Mach-Hommy shocked fans this week with the surprise release of Dollar Menu 4, the fourth edition of his iconic series which has been on a five year hiatus.

Every so often Mach, the Port-Au-Prince, Haitian artist, emerges from whichever den he’s been inhabiting to bless fans of underground rap with some of the most impressive music of the year. Dollar Menu 4, the follow-up to Balens Cho and the magnificent Pray for Haiti from 2021, recruits a small, but vicious cast of guest producers and rappers including Your Old Droog, Tha God Fahim, Big Cheeko and more.

When Flatbush Zombies first took off in the 2010s through songs such as “Palm Trees,” “Bounce” and “New Phone, Who Dis?,” there was an appreciation for all three of the group’s members: Zombie Juice, Erick Arc Elliot and Meechy Darko. But Meechy always stood just above the rest. His dark, sinister-sounding voice would catch the ears of whichever listener the music encountered.

As can be expected, fans were always hopeful that the Brooklyn rapper would step into his own lane and release music independently. He’s finally embarked on the solo endeavor with his newest project Gothic Luxury. Boasting 13 songs, Gothic Luxury breathes new life into Meech’s already highly respectable career.

Dro Kenji, one of the hottest rappers on the Internet Money team, is known for his melodic raps, a Juice WRLD-inspired flow and catchy hooks. Songs such as “FINDERS KEEPERS” with Scorey and “KILL CUPID” from 2021’s EAT YOUR HEART OUT established Kenji as an artist capable of appealing to a large demographic. His latest, ANYWHERE BUT HERE, continues this trend while not sacrificing the niche sound he’s developed over his short career.

There are a few features on ANYWHERE BUT HERE including up-and-comer DC the Don, NoCap, KA$HDAMI, Midwxst and Mike Dimes, but Kenji saved room for him to continue to prove himself as an artist.

He’s continued to build his acclaim through albums such as last year’s CARE PACKAGE 4 THE STREETS, forever grateful from February of this year and now Waited My Turn. Across the album’s 13 songs Lil Bean goes toe to toe with Zay Bang, 24kGoldn, Pendrick, 23Peezy and more.

Still hungry for more? Be sure to stream the week’s Honorable Mentions: Golden Child, Chapter 2 by Autumn!, 88GLAM’s Close To Heaven Far From God and VIRGOAT by MoneyMarr.