Only a few months after the release of his most recent full-length, Undeniable [click to read], legendary lyricist AZ [click to read] is set to bless his fans with more of his intricate wordplay via an all-original material mixtape, N4L (Niggaz 4 Life), due August 5th. HipHopDX recently caught up with The Visualiza for a brief conversation about said tape – the inspiration for this somewhat unexpected release, the criticism that has arisen about it, and just what listeners can expect to hear from the conceptually driven mix.

During his conversation with DX, AZ revealed that there were many motivations for N4L, which included to stay current and keep music coming out to the public, and that he was approached by DJ Absolut with an offer to do just that. But the most obvious motivation for this release was his “Life’s A Bitch” [click to read] co-star.

“I was inspired by Nas’ movement,” said AZ. “That’s my boy. And when I was putting out the Undeniable album I was getting a lot of questions like, ‘When you and Nas doing this and doing that?’ And it was overwhelming actually. I mean, I always got [those questions] through my career, but it was more overwhelming this run. And [so] I decided I would never know if [working together again is] gonna come into fruition. So I said, ‘You know what, I’ma hop on that bandwagon and do my Niggaz 4 Life ‘cause he’s doing the nigger theme, and it’ll give the fans an opportunity to say [if] they did do an album [together] this how it would sound like.’” 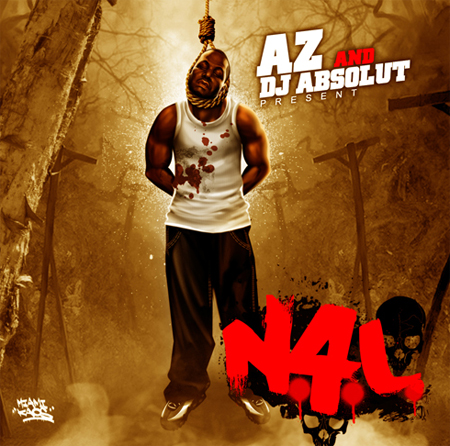 Earlier this year however, during AZ’s most recent feature interview with DX [click here to read], the Brooklyn emcee fairly, but firmly, made a point of establishing his own artistic identity apart from the mighty shadow that Nas has cast over his career. So why now do a mix inspired by, and thematically aligned with, his longtime partner-in-rhyme’s forthcoming new album?

“When it’s dealing with awareness, that’s totally different,” AZ replied. “[I’m not doing this to be in his] shadow, this [mixtape] is awareness for the fans, the culture, our peoples. I’m not under nobody’s shadow. I’m not trying to…Me and homie cut from the same cloth at the end of the day regardless of whom or what. But I’m always gonna hold mines lyrically on my own.”

Unfortunately, skepticism about A’s claim of a genuinely non-strategic motivation for this mix have surfaced in the days since the release of N4L was first announced, suggesting that “Sosa” is merely riding on the conceptual coattails of the man who introduced him to the world on 1994’s Illmatic.

“I ain’t look at it from that perspective when I got into [making this mixtape],” said AZ. “So it wasn’t no shadow shit or nothing, I’m just adding on. That was my frame of mind when I got into [recording the mixtape], that I’m adding on. ‘Cause [the concept] is so powerful. So when I jumped into it I didn’t even think about that small way of thinking [about my intentions]. But if [my name] is gonna be connected [with Nas] it’s gonna be connected in something that’s powerful. And I feel like this is powerful.”

Boasting 16 all-original songs (no freestyles to other artists tracks) modeled in the same early-’90s sonic vein as Nas’ forthcoming Untitled disc, N4L is sure to be as powerful an artistic statement as the album it was inspired by.

“My Niggaz 4 Life is ‘never ignorant getting goals accomplished,’ that’s what nigga stands for to me,” explained AZ of his release’s n-word theme. “So I use [the word] in a positive [way]…I speak from every spectrum: the ignorant nigga that has no knowledge of self, to the nigga that do have knowledge of self, from the broke nigga to the rich nigga…I’m not preaching, but I just try to drop a jewel. And awareness is always good for me. So I entertain and educate at the same time. That’s just me, [my career] overall, if you listen to my poetry you gonna get something out of it.”

With song titles such as “Knowledge, Freedom,” “12 Jewelz,” “Conspiracy,” “Nigga Games,” and “Runaway Slave,” AZ’s lyrical direction on N4L is made abundantly clear.

“I try to deal with every spectrum of the black man,” he noted. “We’re frustrated, and it’s a long line of frustration that came from our ancestors that’s in our D.N.A. And that’s why we may act a certain way, and the reason why certain brothers project themselves a certain way. And I just try to speak from that perspective.”

Helmed by DJ Absolut [click to read] and entirely produced by Absolut and A.W.O.L. [click to read] collaborator Frado for their Addicted For Life production squad, the mix sports cameos from Raekwon [click to read], Sheek Louch [click to read], Trey Songz, and artists from AZ’s Quiet Money fam including Charlie Rock and StarKim. The first shot from N4L is “The Secret” [click to listen].

Wanting to secure formal distribution for the mix so that it can be available at traditional retail outlets, Absolut suggested that he and AZ use Koch’s distribution arm to release N4L to the public. But after controversy ensued between AZ and Koch Records’ A&R department in the days immediately following the release of Undeniable [click to read], it seemed unlikely A would ever do business with the indie-powerhouse again.

“Nobody at Koch [the New York-based label] has any affiliation with this,” he clarified, noting that only the Canadian-based distribution headquarters for Koch will be involved in any way with N4L. “Everything [was] funded and done by me and Absolut.”

AZ further clarified that his days recording for Koch Records are over. “I’m officially a free agent right now,” he declared. “I owe Koch nothing. I’m done with that. I did that chapter and now I’m just trying to find the next avenue. I did the majors. I did the independents. And now I know both sides and gotta make my next move my best move. I got my masters in the game now.”

His newfound education and insight into the game aside, AZ remains fairly adamant in his opinion of his final Koch Records funded release, Undeniable, with his hindsight view of the album differing little from his initial pre-release outlook, even with mixed reviews and a less than stellar chart performance for his seventh solo effort.

“Every time we sit down as artists and do an album it’s that zone we in, it’s that chapter of our life,” he explained of his creative direction on Undeniable. “And that particular chapter of my life I felt like I was in a comfortable state of mind, and I wanted to bring that across to my audience. It wasn’t too much of the hardcore ‘cause I did the hardcore [already]. Coming from A.W.O.L. to Format I said, ‘Okay, let me switch it up for a minute and just get into that musical zone and still keep the poetry sharp.’ And I felt like I got that across. I did it. And I’m cool with it. I’m good. I’m constantly elevating, and there’s so much more to come.”

N4L will signal the reemergence of a much rawer AZ.“This is totally to the left of what Undeniable was,” he noted. “To me, I think this is a classic mixtape. The whole joint is that [early-’90s] Hip Hop vibe. It’s all street music.”

More street releases from he and his Quiet Money team are due to follow N4L (“I’m ‘bout to get on some [Lil Wayne] shit, some [2Pac] shit…just constantly putting music out,” he revealed.), as well as his first foray into street cinema, his self-funded and co-written movie Silent War, which is set to begin filming next month, with a soundtrack tentatively slated to drop in November.

But for the time being, AZ’s focus is firmly on making N4L as memorable a mix as he claims it will be, and not be seen as just an exploitative knockoff of his homie’s much-publicized new album.

“You know Nas always brings something to the table that’s food for thought for the people,” AZ noted. “And [so] I think [it’s] a good time for me to put [this mixtape] out. You’ll get him burning the candle from one end, [and me] burning the candle from the other end, [and] at the end of the day we gotta meet up in the middle. And [that’ll] be for the fans, what they been missing.”

Hopefully the tag team that crafted classics the likes of the aforementioned “Life’s A Bitch,” “The Essence,” “How Ya Livin,” “The Flyest,” and more can indeed meet up in the middle, possibly using their similarly themed releases as a bridge back to recording with one another again.

“Not as of yet,” AZ replied when asked if he and Nas have communicated since details of N4L were announced. “I think it’ll be the right time for us to politic [when it’s the right time]. Like I said [in our last interview], ain’t no bad blood or nothing, everything is everything.”