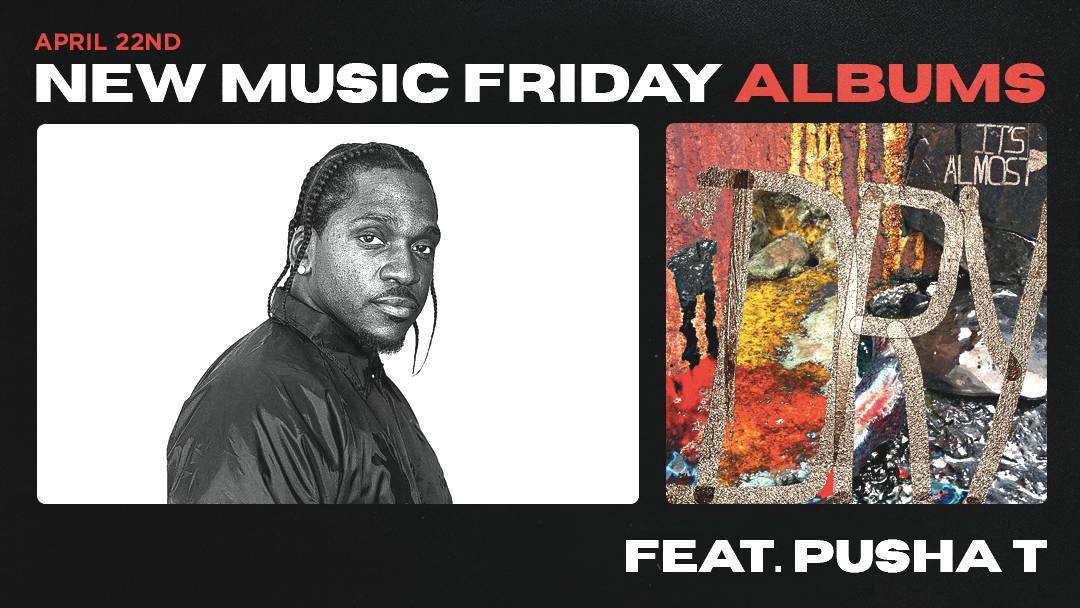 As the cloud of smoke dissipates and the world returns to normal, a brand-new lineup of Hip Hop albums emerges, making this edition of New Music Friday a necessity to end your week on a good note.

This list starts with the King of Coke Rap, Pusha T, and his new album It’s Almost Dry, which features verses from Jay-Z, Pharrell, Lil Uzi Vert and more. From there we explore the introspective excellence of PG County, Maryland’s redveil with his latest release learn 2 swim.

Keep reading to discover all the best projects released on the week ending on Friday (April 22), below.

Releasing a day after his Cokechella listening party in New York City, Pusha T is back with his Daytona follow up, a star-studded 12-track album titled It’s Almost Dry. Produced in entirety by Kanye West and Pharrell, King Push’s latest is an ornate testament to the hustle and the spoils it brings.

Led by “Diet Coke” and the Jay-Z and Skateboard P-assisted “Neck & Wrist,” It’s Almost Dry also brings the Virginia rapper together with Lil Uzi Very and Don Toliver on “Scrape It Off The Top” as well as iconic MC Malice for a Clipse reunion.

Rapper redveil just turned 18-years-old, but his CV is already more impressive than many of his peers. Earlier this week, the burgeoning MC unleashed learn 2 swim, arguably his best album to date, which was not only released independently, but was entirely released by redveil himself.

Veil handles most of the project solo, enlisting only the help of Mekdelawit and Renaissance Mic on “shoulder” plus Ovrkast and Virginia’s Fly Anakin on “automatic,” leaving plenty of room for the “Weight” rapper to explore themes of identity and maturity.

Blxst – Before You Go

In 2020, Los Angeles singer Blxst broke through into Hip Hop and R&B’s spotlight with tracks such as “Chosen” with Ty Dolla $ign and “Be Alone.” He kept the momentum with No Love Lost and the following year’s Sixtape 2 with fellow West Coast act Bino Rideaux. Now Blxst is back with Before You Go, just in time for warmer weather.

This past March Blxst began his rollout with the Zacari-assited “Sometimes,” a bouncy party anthem which is balanced by the TDE singer’s delicate delivery. Spanning twelve songs, Before You Go also includes verses from Arin Ray and Rick Ross.

One thing you can always count on is Pittsburgh rapper Wiz Khalifa delivering the perfect tunes to soundtrack a smoke session. What better day to drop than the worldwide stoner holiday? On 4/20 Wiz finally uploaded his 2012 project Taylor Allderdice to DSPs, a sprawling 17-song effort which enlists the help of Rick Ross, Juicy J, Amber Rose, Chevy Woods and more.

Ripe with weed anthems and smooth vibes, Taylor Allderdice is a staple of the Taylor Gang rapper’s discography, a corridor of the genre which never gets old, especially when listening with something lit in your hand.

Baton Rouge, Lousiana’s own HD4president has brought his exuberance and catchy flows to new heights with his latest release Find My Way. After his “Can’t Stop Jiggin’” single exploded into TikTok virality, Hd4president kept the pressure on, first releasing To Da Max in 2021 and now Find My Way.

His raps, which draw influence from classic Southern crooners and Crunk MCs alike, are explosive on his latest effort, which also features Icewear Vezzo, Yung Bleu and Mouse On The Track.

Hailing from Elsmere, Kentucky, rapper E The Profit flexes his versatility on his new 10-track tape 2 Effortless. E finds himself falling into a wide range of flows, from the BabyTron, Plugg-esque sounds of “How To Lose (Intro)” to the malicious raps of “R.T.T.B.”

Bulletproof from front to back, 2 Effortless proves E The Profit is worthy of some serious attention. If he’s not on your radar already, make some changes.

This list couldn’t end without covering this week’s Honorable Mentions: 90 Day Run from YG Teck and Bankroll Freddie’s From Trap To Rap 2.