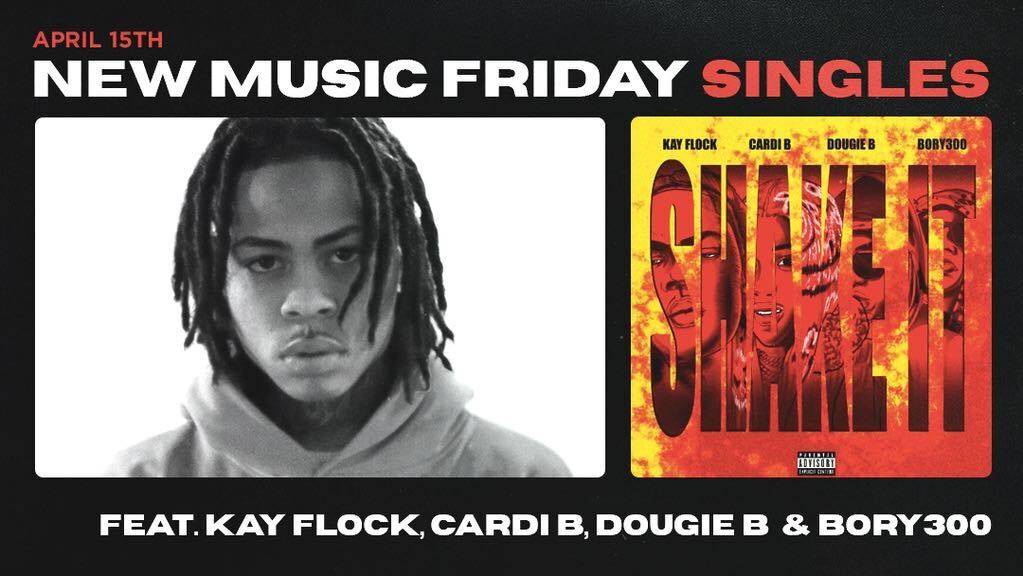 The weather has finally turned and spring has begun. As the weekend draws closer, HipHopDX has all your festivities covered with a round-up of the best singles of the week.

Kicking off this edition of New Music Friday is breakout Drill sensation Kay Flock linking with Queen of Uptown NYC Cardi B on the summer-ready anthem “Shake It,” also featuring Dougie B and Bory300.

From there we explore the sounds of R3HAB’s remix of Tyga and Doja Cat’s “Freaky Deaky” before checking out Duke Deuce’s “Running Out Of Love” with Dante Smith.

There’s plenty more to hear, so keep reading for the internet’s best list of singles released on the week ending on Friday (April 15) below.

Don’t tell New York Mayor Eric Adams: Drill music is back. Some will say that the genre never faded, but following the loss of Pop Smoke the Chicago-originated sound dissipated. Thanks to a few promising new rookies like Kay Flock, the scene is reinvigorated.

On “Shake It,” the young MC recruits industry veteran Cardi B, Dougie B and Bory300 for a song that’s sure to soundtrack the Five Boroughs all summer long.

After a bizarre spat with her Paraguayan fans this past March, which led to Doja Cat’s brief retirement from music, the “Get Into It (Yuh)” multi-hyphenate has linked with Tyga and DJ/Producer R3HAB for the official “Freaky Deaky” remix.

The Moroccan-Dutch DJ’s remix breathes more life into the Dancehall-inspired production. As Tyga surfs across the pitter-patter of drums with a smooth flow, Doja not only handles the hook but drops a quick pop-forward verse as well.

Minnesota artist Michael Suavé is pumping life back into his 2020 track “Type of Time,” which originally appeared on his album No Distractions, with help from legendary Los Angeles rapper The Game.

The Game, who’s Hit-Boy produced album is on the way, adds a splash of West Coast flavor to the dark sounds of Suavé’s raps. The perfect song for hot summer night drives, “Type of Time (Remix)” is a must-listen.

Be sure to stream this week’s Honorable Mentions consisting of Marlon Craft’s “Cocky Humble,” Day Sulan’s “Gravity” and “On A Tee” by SpotemGottem and Icewear Vezzo.