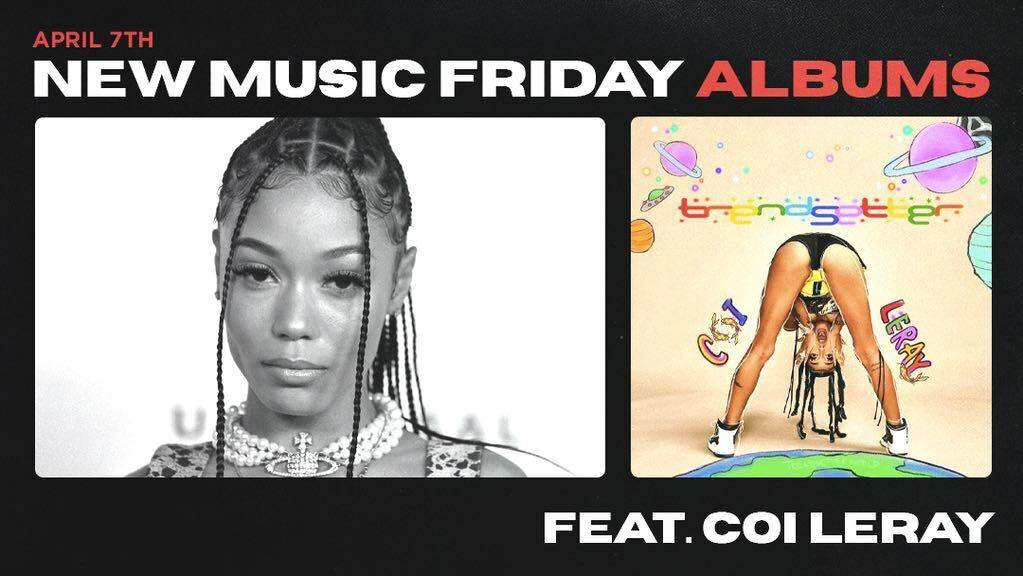 The first full week of April is proving to be a particularly eventful one in the world of Hip Hop. Every breed of rap fan is sure to be satisfied with this week’s edition of New Music Friday, from fans to New York Drill to purveyors of radio-friendly hits.

This list begins with Coi Leray’s Trendsetter, which marks her first album since 2019’s EC2. From there we head north to Brooklyn’s Fivio Foreign and his new project B.I.B.L.E., executive-produced by the artist formerly known as Kanye West.

2022 HipHopDX Rising Star Coi Leray often finds herself in the middle of a heated internet argument between her adoring fans and those who, for whatever reason, can’t stand her music. Hate or love Leray, her impact on Hip Hop has been undeniable over the past two years. Though she’s quickly ascended to the genre’s heights, it’s been three years since the “TWINNEM” MC dropped a full-length album.

Trendsetter, Leray’s latest effort, is loaded with the pop-infused tunes she’s been dropping for a while now. Helping her reach her full vision are guest verses from a wide range of acts including Yung Bleu, G Herbo, Polo G and of course Nicki Minaj, whom Leray collaborated on for her single “Blick Blick.”

It’s truly a landmark achievement when a guest verse is the most beloved part of a Kanye West album, a feat Brooklyn rapper Fivio Foreign was able to accomplish with his phenomenal feature on “Off The Grid” from Donda. He followed that performance up with “City of Gods” which finds him with Ye and Alicia Keys for something of a “Empire State of Mind” sequel. Now the Drill rapper has come forward with B.I.B.L.E., his sophomore studio album.

Executive-produced by Yeezy himself, B.I.B.L.E. is a sweeping and ambitious project from one of New York City’s strongest MCs. Recruiting help from top talent such as Quavo, A$AP Rocky, Lil Yachty, Polo G and more, one thing Fivio has certainly accomplished with B.I.B.L.E. is bringing a buzz back to the five boroughs, something desperately needed since the passing of Pop Smoke.

Last year Vince Staples blessed fans with a somber and vivid eponymous album which, after being met with a mixed reaction, grew into one of the most beloved projects of 2021. The Long Beach rapper has now come forward with Ramona Park Broke My Heart, a collection of sixteen tracks which address his experience growing up in Southern California.

Led by “ROSE STREET,” which features a smooth flow over spare instrumentals and the DJ Mustard-assisted “MAGIC,” Ramona Park Broke My Heart is influenced by the sounds of classic West Coast Hip Hop while simultaneously remaining steadfastly unique.

Louisville, Kentucky rapper EST Gee quickly became one of the game’s hottest rookies through projects such as Bigger Than Life Or Death and his fiery features on projects like Jack Harlow’s That’s What They All Say and Lil Durk and OTF’s compilation album Loyal Bros. With a bit more time in the industry, 42 Dugg has also carved an exceptional lane for himself while dropping the thrilling Free Dem Boyz and his breakout verse on Lil Baby’s “We Paid.”

After releasing the explosive “Free The Shiners” single, the two MCs have linked together for Last Ones Left, blending their unique rap styles into a wild but cohesive sound. With featured artists ranging from BIG30, EST Zo and more, Last Ones Left is not to be missed.

One of R&B’s most talented acts, Syd has just released Broken Hearts Club ending her nearly five year long hiatus from dropping solo projects. Syd has the rare ability to draw the listener deep into her world, making them feel each and every word she sings. On Broken Hearts Club, Syd relives a painful breakup and learns how to grow from the experience.

Broken Hearts Club will surely be a welcome addition to her catalogue, especially given her recent statements that the next project from The Internet, Syd’s R&B band, will be the group’s last. Despite the melancholy news, any new music from the “Fast Car” artist is worthy of a celebration.

Over two decades in the game and Houston spitter Paul Wall still hasn’t shown any signs of slowing down. Working with New York City’s Termanology, the People’s Champ just dropped Start 2 Finish, a classic-sounding album with appeal to the contemporary listener. Everything from the production, handled by Statik Selektah, Dame Grease and Pete Rock, to the album’s features (which include the legendary Bun B, Nems and breakout act Fly Anakin) is exemplary of the high quality standards Wall and Termanology have set for themselves.

Album highlights include “Thailand” and lead single “No Asterisk,” but the entire tracklist is ripe with hard bars and funk-laden production.

Girl Talk knows how to build a team. For his latest album, the DJ enlisted help from an elite group of talent: Pittsburgh’s Wiz Khalifa, the soulful Big K.R.I.T. and the illustrious Smoke DZA.

Full Court Press, the super-group’s joint album, is particularly unique given each of the different rappers’ unique style. But although they may not appear to go hand-in-hand at a first glance, their distinct influences are blended seamlessly thanks to Girl Talk’s thoughtful and soul-laden production.

Tom The Mail Man is an artist whom resists most categorization. Some of the music he’s released, such as tracks like “Taking Over” and “Last Night,” are punk-fueled and angsty. Others, like “My Storm” and “Come Over” are more somber and slow. His unpredictability paired with the ability to seemingly do every genre, make attempting to attach labels to him nearly impossible.

Sunset Visionary, Vol. 2 arrives after the release of “Over” and “Brown Eyes and Backwoods,” the project’s two lead singles. Cathartic, ambitious and unlike anything else released this year, Tom’s latest is impossible to turn away from.

New York rapper billy woods is shrouded in mystery. He refuses to show his face, stays far away from social media and his winding esoteric bars evade easy comprehension. Working with the underground cult legend is Preservation, a producer (and tour DJ for Mos Def) who has also worked with the likes of Mach Hommy, Nickelus F and Boldy James.

Backed by Preservation’s eerie production, Aethiopes is a winding journey through the cavernous mind of one of Hip Hop’s most fascinating acts.

Once you’ve overcome the massive amount of music released this week, be sure to check out Stardust by Yung Lean and Jungle by DCG Brothers.