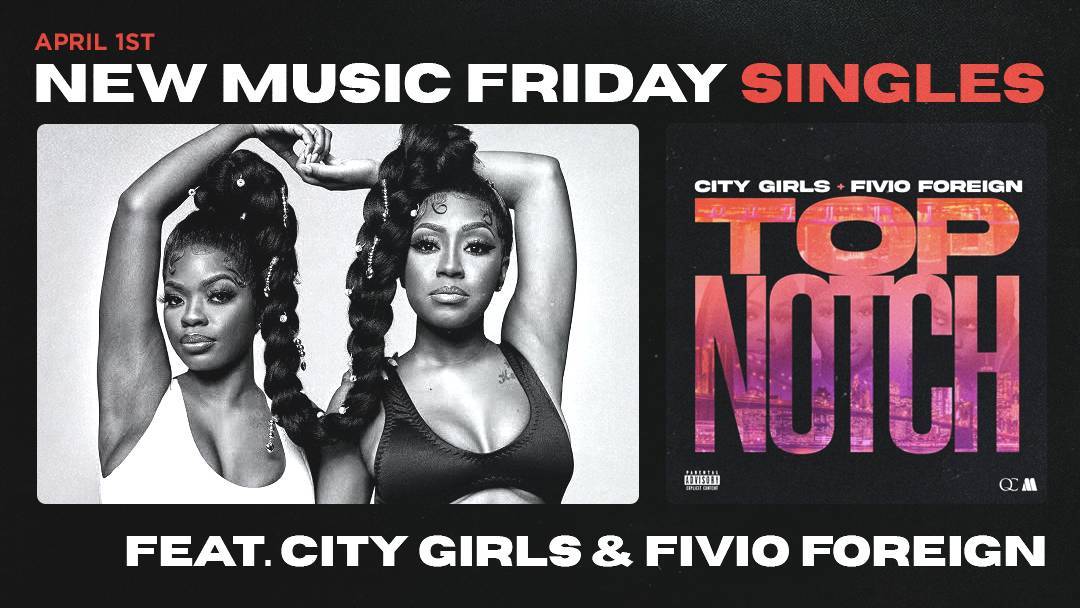 April Fools Day may fall on Friday (April 1), but this list is as serious as it gets. One thing Hip Hop fans can count on each and every week is HipHopDX laying out the best singles from the world of Hip Hop/rap and R&B.

The week kicks off with a rambunctious single from City Girls and Fivio Foreign titled “Top Notch.” From there, DX explores the latest tracks from Vince Staples and Freddie Gibbs featuring Rick Ross before pressing play on “The God Hour,” a collaborative effort between A$AP ANT and A$AP Rocky.

With brand new sounds from Lil Tjay, NLE Choppa and more, this week’s New Music Friday will likely have fans of all types satisfied.

The weather is warming up, but the true sign of spring is the release of “Top Notch,” the City Girls’ most recent track featuring New York City’s own Fivio Foreign.

Like any record from JT and Yung Miami, fans can expect to hear a salacious bop full of quotables and confidence. After City Girls exploded on the scene with tracks such as “Twerk” featuring Cardi B and “Where The Bag At,” they’ve only continued to level up their game — from TikTok anthem “Shisha” to their latest.

After releasing Vince Staples, his phenomenal 2021 album, the Long Beach rapper has begun to unfold singles from his upcoming album, Ramona Park Broke My Heart. The rollout began with the Mustard-assisted “MAGIC” and continued with “ROSE STREET.”

His self-titled album was understated and subdued, but “ROSE STREET” hints that Staples is working on something with a bit more pressure. Rapping over a hard-hitting Los Angeles-style beat, the “Prima Donna” MC spits with a winding and dexterous flow.

Nothing bothers Freddie Gibbs. The Gary, Indiana-bred rapper has consistently found himself in the media for beefing with everyone from DJ Academiks and Gunna to Benny The Butcher. But the noise doesn’t distract Gibbs from unleashing new singles onto the world, his latest being “Ice Cream” with Rick Ross.

A$AP ANT is something of a Hip Hop renaissance man. His Marino Infantry brand is known for their streetwear gear, but they also released three compilation albums in 2021, which featured everyone from the A$AP Mob to upcoming rappers.

“The God Hour,” the latest release from the Marino Infantry boss, comes with a feature from Harlem’s A$AP Rocky. It’s a modern-day approach to the sounds of traditional NYC Hip Hop. Instilled with influence from Drill and Plugg music, “The God Hour” is a thrilling ride from two of the city’s top talents.

Johan Lenox f. Thouxanbanfauni – “Get My Shit Together”

redveil’s 2020 project Niagara was what first introduced the young rapper as a true rising star. Songs such as “Campbell,” “Weight” and “Drown” were devoured by fans of his raw and underground sound. Though he’s released a small handful of music in the years following Niagara, it’s just been confirmed his third official album, learn 2 swim, is on its way, led by the Sam Truth-assisted “better.”

Impassioned and cathartic, “better” is a stunning example of redveil’s ability to make the listener feel each and every word he raps.

NLE Choppa’s career has taken many twists and turns since 2018’s “Shotta Flow.” He’s released albums like Cottonwood and Top Shotta, two vicious projects which proved his rapping abilities with cutthroat bars. He followed those up with From Dark to Light, claiming he was moving more into a positive light in Hip Hop. His latest single, “Yak Flow,” sits somewhere in between his dueling personalities, a lively song. which is more aimed for the party than the streets.

This week’s Honorable Mention goes to “Before I Let Her Go” by Phabo.