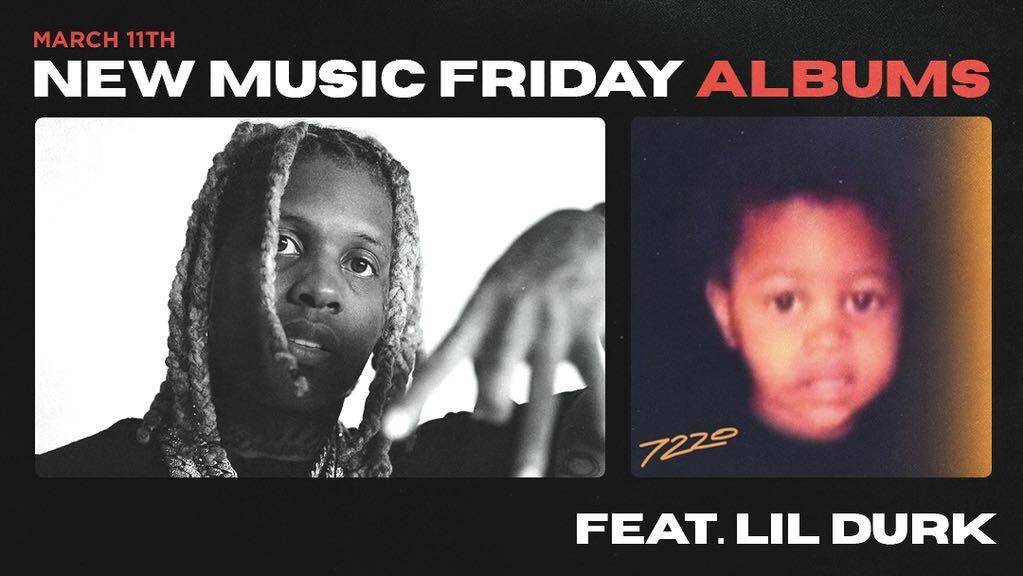 As warmer weather begins to peek its head through the winter clouds, there’s never been a better time to begin to get your spring playlists ready.

On today’s edition of New Music Friday, DX adds plenty of fodder for your weekend listening, starting with Lil Durk’s 7220.

The hyped albums of the week don’t stop there as Benny The Butcher is finally releasing his long-awaited Tana Talk 4 album which features verses from J. Cole, Boldy James and more.

The music just keeps coming so keep reading for the best new Hip Hop and R&B albums of the week.

Chicago native Lil Durk has been a trendsetter for over a decade. His melodic take on Drill music lead to Billboard success and plenty of copy cats. But his run starting in 2020 with The Voice truly is special to watch.

Following up his earth-shattering 2021 which found him nabbing his first Billboard No. 1 Album with The Voice of the Heroes, Durkio’s back with 7220, an intimate album which features love songs, club bangers and street tales alike. With verses from Future, Gunna and Summer Walker, Durk’s latest is a star-studded affair that’s not to be missed.

Benny The Butcher is likely the Griselda member with the most universal appeal. His bars are thoughtful and elegant, even when’s speaking about breaking down work and driving cross-country. His craftsmanship led him to the massive look he’s currently facing.

Tana Talk 4 is loaded with features ranging from J. Cole to Stove God Cooks, and including a top-tier range of producers from Alchemist to Daringer.

Mike Dimes – IN DIMES WE TRUST

TikTok may be partially to thank for the meteoric rise of Texas rapper Mike Dimes, but there’s nothing gimmicky about him. His latest album In Dimes We Trust is one of the week’s best releases by far as the young rapper takes a hard-spitting approach to classic TX Hip Hop.

Breakout singles “BACK ROOM” and “NO TRENDS” are the album’s strongest showings, but the entire tracklist warrants a thorough listen.

Richmond, VA rapper Fly Anakin comes from an ilk of rapper characterized by a mix of irreverance an nostalgia, painted with a dash of contemporary horror. Along with peers such as MIKE, Pink Siifu and Earl Sweatshirt, Fly Anakin has established himself as one of the most fascinating artists in the genre, again proved with latest release Frank.

Following-up a hefty output in 2021 which included the fantastic joint album FlySiifu’s with Pink Siifu, Frank hosts a range of familiar guests while expanding on Anakin’s galactic approach to Hip Hop.

Shenseea, the Jamaican Dancehall sensation, was spotted on the Donda stage during one of Kanye West’s listening sessions and has used that attention to catapult herself into Hip Hop and R&B’s mainstream with latest album ALPHA.

On her latest album, Shenseea managed to wrangle an impressive cast of guests from Tyga and 21 Savage to Megan Thee Stallion and Sean Paul.

For an artist with only one album under her belt, Kali has managed to pave quite an impressive lane for herself. Best known for songs “MMM MMM” featuring ATL Jacob and “Do A Bitch,” Kali just released a follow-up to her debut This Why They Mad Now, titled Toxic Chocolate.

For all your smooth-tunes needs, look no further than Lucky Daye’s Candydrip. One of R&B’s most promising rookies, Daye’s been at it for a while but last year’s Table For Two was one of 2021’s best releases in the genre.

Candydrip is similarly paced, a rolling album full of emotive singing and impassioned features from Lil Durk, Smino and Chiiild.

KayCyy first began to make a name for himself when news broke that Kanye West had selected him as something of a protege. From working on Donda and its deluxe to his latest singles, KayCyy has proved he’s here to stay.

A bite-sized project from one of Hip Hop’s most thrilling newcomers, TW20 50 is just a hint at what’s to come.