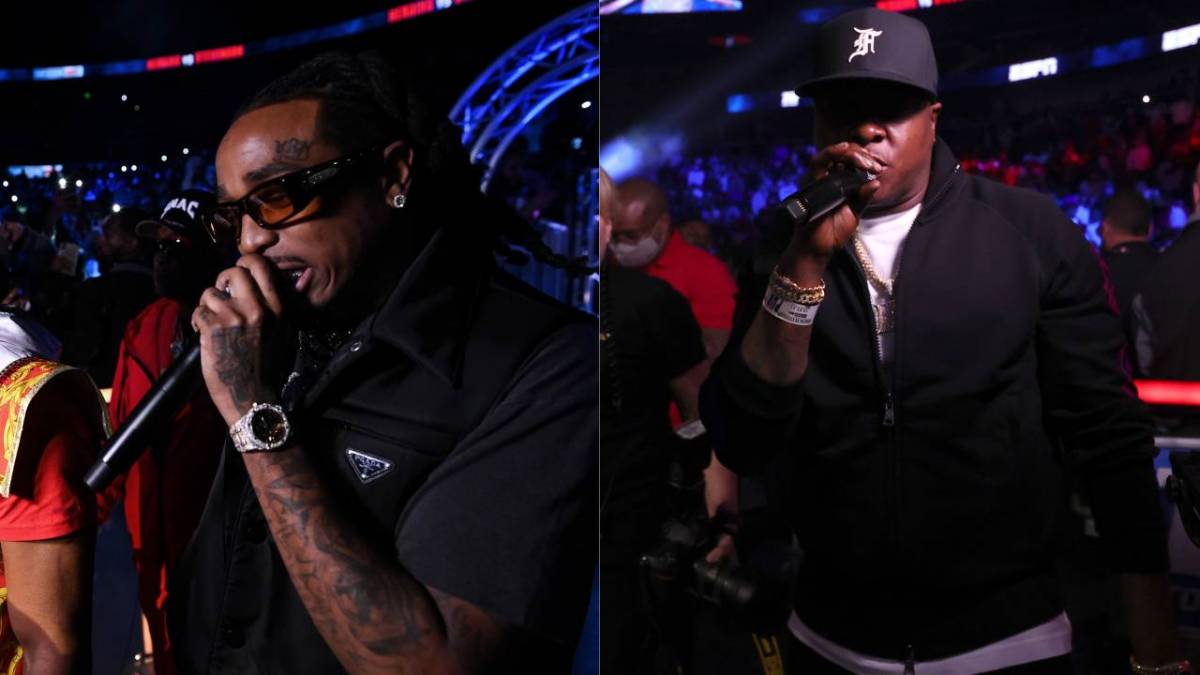 As the two rappers helped introduce Herring and Stevenson, respectively, social media quickly pointed out the LOX rapper and Verzuz MVP treating the night like any other, whereas Quavo pocketed an easy check. The Atlanta rapper, who previously helped walk Floyd Mayweather down to the ring for his fight with Logan Paul in June, performed “Straightenin” from Migos’ Culture III.

Meanwhile, Kiss escorted Herring to the ring performing a medley of mixtape favorite “The Champ Is Here” and Kiss Tha Game Goodbye single “We Gon’ Make It.”

The performances between the two may have gone in Jadakiss’ favor, but the night didn’t belong to Herring. Stevenson dominated the fight, winning via TKO in the 10th round to claim the WBO’s junior lightweight title. The undefeated boxer improved his record to 17-0 with what many boxing critics described as a “signature win.”

While Stevenson took home the W in the ring, on social media – all signs pointed toward Kiss on a night where celebs such as Kanye West and Michael B. Jordan were in attendance.

“Jadakiss rapping all the words after Quavo half-assed his way to the ring is the perfect metaphor for the Old vs. New fight that’s (hopefully) about to happen in the ring,” one social media user wrote.

Jadakiss rapping all the words after Quavo half-assed his way to the ring is the perfect metaphor for the Old vs. New fight that's (hopefully) about to happen in the ring.

See more reactions to Quavo and Jadakiss’ performances below.

Herring won the ring walk and that was it lol, bringing out Jadakiss while Stevenson brought out Quavo

Shakur Stevenson walked out with Quavo. Jamel Herring up him with Jadakiss. That two different generations definitely showed there. #HerringStevenson

LMFAO QUAVO WALKED OUT SHAKUR STEVENSON AND FORGOT TO RAP

Duh. (And great choice for a fight!)#HerringStevenson

Herring 1, Stevenson 0
.. cus of that Jadakiss walkout 🔥

The one victory of the night for Herring was his choice of ringwalk rapper. Jadakiss over the Migos all fucking day. #boxing #HerringStevenson