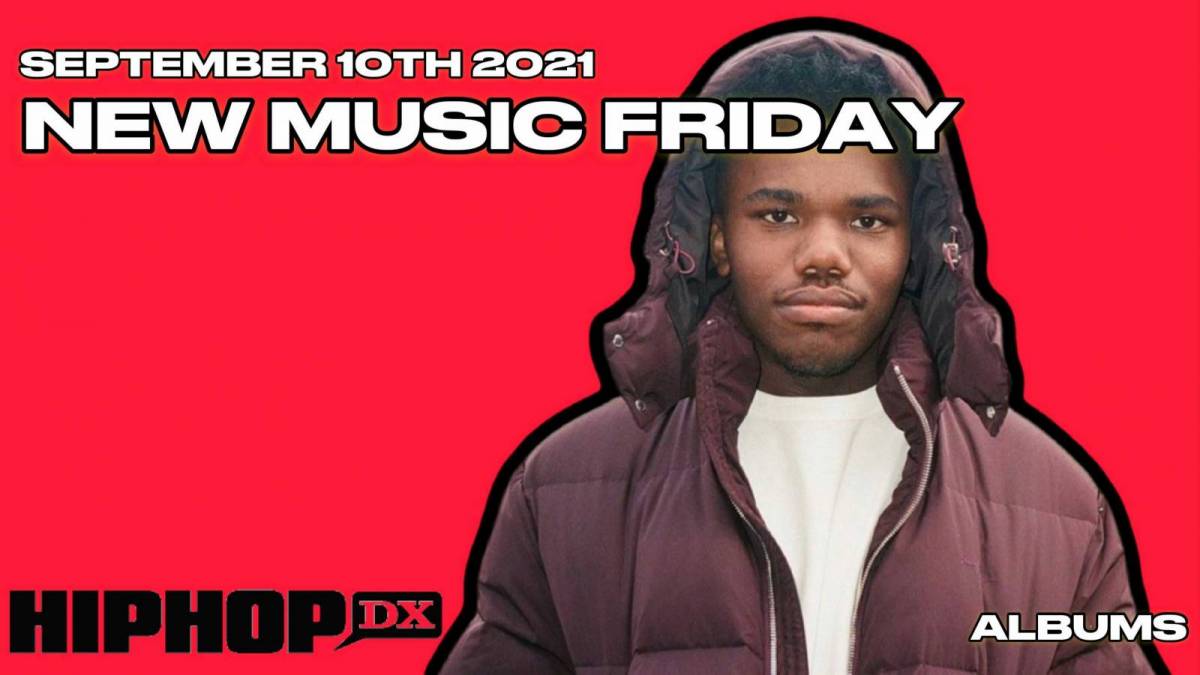 After a chaotic two weeks in Hip Hop led by the releases of Kanye West’s Donda and Drake’s Certified Lover Boy, the rap world has started to return to normal. Luckily, there’s still heaps of new albums to explore. The weather’s starting to cool off, so there’s never been a better time to add a few new projects to the queue.

The week kicks off strong with Baby Keem’s The Melodic Blue containing features from Kendrick Lamar, Don Toliver and more. After her appearance on CLB, Yebba capitalized on the momentum with the release of Dawn, while Common dropped A Beautiful Revolution (Pt 2).

Meanwhile, genre-breaking artist Tommy Genesis dropped Goldilocks X, Spencer. released Are U Down? and AZ came forward with Do Or Die 2, the follow-up to his classic 1995 debut.

Keep reading for HipHopDX’s complete coverage of all the new albums which dropped on the week ending on Friday (September 10), below.

Baby Keem cannot be stopped. Earlier this month he released “family ties” with his cousin Kendrick Lamar. He laid down one of the best verses on Kanye West’s Donda. Now he’s back with The Melodic Blue, his first project since his explosive 2019 mixtape DIE FOR MY BITCH. While his first project serves as an introduction, with Keem attempting to prove his rapping prowess, The Melodic Blue is where the California rapper has truly come into form. There’s welcome features from Kendrick, teasing new music from the Compton legend without distracting from his younger cousin’s intentions.

Also included on the project is “durag activity” with Houston rager Travis Scott, the project’s first single which was released earlier this year and “cocoa” with hook-killer Don Toliver. Kendrick may have received the torch from Snoop Dogg, but it appears Baby Keem is next in line.

Tony Seltzer is behind many of your favorite hits. The Brooklyn-based producer has worked with the likes of Lucki, KEY!, Mavi and more. His new compilation album Hey Tony has just arrived, boasting a list of features most producers could only dream to collaborate with. Amongst others,  underground rapper WiFiGawd, Slimesito and Wiki all make appearances over Seltzer’s dystopian production.

From “One Minute,” the spaced-out Lucki-assisted track to Eartheater’s psychedelic performance on “Joyride,” the features give relentless verses over some of the best Seltzer beats of the year.

From Discord virality to a Drake cosign; Yeat’s been experiencing an exceptional year. He’s already been prolific in 2021—Up 2 Më, the “Sorry Bout That” rapper’s newest offering, marks his third album of the year so far. Yeat’s unpolished delivery and schizoid production falls in the same family as rappers such as whiterosemoxie and SSGKobe, but the 21-year-old MC’s music shows his remarkable melody making capabilities.

Yeat’s irreverance on Up 2 Me is intoxicating. His rapping style is so effortless it feels that he floats across the digicore-inspired beats. His latest will prove to be his biggest look yet, but Yeat’s looking comfortable in the driver’s seat.

Just one day after “Drive Slow,” the Kanye West track featuring Paul Wall’s most infamous verse, went RIAA certified gold, The Peoples’ Champ dropped Hall Of Fame Hustler, his first album of the year. One of rap’s most beloved figures, the Ice Man’s latest is a testament to his Texas roots, full of deep grooves and a rolling drums.

Where he handled his most recent album Subculture nearly entirely solo, Hall Of Fame Hustler also includes features from Slim Thug, Lil Keke and more. Wall may be in the Hip Hop Hall Of Fame, but each new project is still a treat.

Hip Hop, Pop, Intergalactic Hyperpop: call it what you want—Tommy Genesis makes hits. Goldilocks X, the latest album from the Canadian songstress continues her lineage of energetic, frantic bars over booming production tinged with internet era sounds. Genesis, who raps with the bravado of Azealia Banks and the futuristic pop sensibilities of Charli XCX, has been a staple of pop rap since 2017’s Empty, but she has continued to evolve in the following years.

Goldilocks X, led by the single “a woman is a god,” shows Genesis’ tendency to lean into club-ready anthems, complete with driving basslines and the rhythmic stutter steps of hi hats. Three years have passed since her last album, so all eyes are on Genesis as she enters this new chapter of her career.

Yebba was not only the sole woman on Drake’s Certified Lover Boy, but she also stole the show on “Yebba’s Heartbreak.” A beacon of elegance and beauty on CLB, Yebba continues with her momentum on Dawn, her latest project. Yebba’s confidence and control over her voice’s power has improved in leaps and bounds since her 2018 debut single “Evergreen.” Once a hired hand to lay backing vocals for other artists such as Chance The Rapper, Sam Smith, Mark Ronson and more, Yebba continues to step more into her own lane and creating sweeping R&B ballads.

Yebba’s voice is stunning, but her pen is wildly under-appreciated and she’s letting that be known on Dawn. The “Louie Bag” singer has a particular skill for translating even the most mundane parts of her life into tales of love, heartbreak and power.

Common’s contributions to Hip Hop have been widely and thoroughly acclaimed. Still, the release of a new album from the legendary Chicago rapper is a notable rap event. The Be rapper’s latest, A Beautiful Revolution (Pt 2), is the second volume to his 2020 project which addressed the social and political issues which have and continue to plague America. Unafraid to face societal and personal issues, Common’s raps are conversational, but still tackle grand issues of identity, violence and trauma all while radiating much needed positivity.

A Beautiful Revolution (Pt 2) is an important album from an artist with a legacy that speaks for itself. In a world of strife, there’s nothing more needed than an uplifting message.

Kevin George – Everybody’s In My Ear

The youth is drawn to angst, anxiety, rebelliousness and excitement. It’s what drove past generations to listen to Kurt Cobain and Linkin Park, early Tyler, The Creator and Bon Iver. It’s also what makes Everybody’s In My Ear by Kevin George so thrilling. The Connecticut-based artist’s latest album is an extension of his past work, but even more drenched in a pop-slanted skew. George has an affinity for Hip Hop, that much is clear through tracks such as “Dead Ends,” “Don’t Sleep Without Me” and “Who’s What,” but it’s when he leans fully into his singing that his vision becomes fully realized.

George’s music falls in the direct lineage of SoundCloud crooners such as XXXTENTACION, Juice WRLD and SoFaygo, but there’s a distinct uniqueness to George, a tendency to include sounds from punk, pop and beyond as he works with producers such as Johan Lenox to build an entire world within Everybody’s In My Ear.

Like many of the artists included on this week’s New Music Friday, Spencer. breaks the mold. Music comes naturally for him, so he explores genres in an unconventional fashion, singing about the complexities of love and relationships over funk and R&B-inspired instrumentals. A purist at heart, Spencer. continually leans on the foundation of blues and souls music, while twisting it through a Gen-Z lens.

Are U Down?, which comes two days after Spencer.’s single “No Direction,” presents the “MyLuv” singer wading through lush symphonies, learning more about himself with each step. There’s something refreshing to hear the artist’s focus on live instrumentals in an age of digitized sounds, making Are U Down? perfect for early Autumn listening.

Twenty-six years have passed since the release of AZ’s classic 1995 album Do Or Die. Despite the long hiatus, the follow-up project has now arrived. The Brooklyn MC, in addition to releasing his own solo projects, was a part of Hip Hop supergroup The Firm with Nas, Foxy Brown, Cormega and Nature. While Do Or Die and his verse on Nas’ “Life’s A Bitch” solidified AZ in Hip Hop history, Do Or Die II marks his ninth solo studio project, directing attention back to how much music the rap vet has released over the past two decades.

Even with his prolific slew of music, Do Or Die II is the Bed-Stuy rapper’s first album in over a decade, though it had been rumored to be released for even longer. With features from Rick Ross, Lil Wayne, Dave East, T-Pain and more, Do Or Die II is a reminder that bars and boom-bap beats never fail to sound fresh.

Jazz Cartier’s latest album The Fleur Print highlights what fans saw in the Canadian rapper back on mixtapes such as Marauding in Paradise, Hotel Paranoia and debut LP Fleurever. But even though Cartier may have had the keys to success early in his career, The Fleur Print is still a landmark moment for the 28-year-old.

With well-placed features from Kyle, Cousin Stizz, Buddy, Kari Faux and more, The Fleur Print not only features some of the best rapping of Cartier’s career, but also exceptional guest appearances.