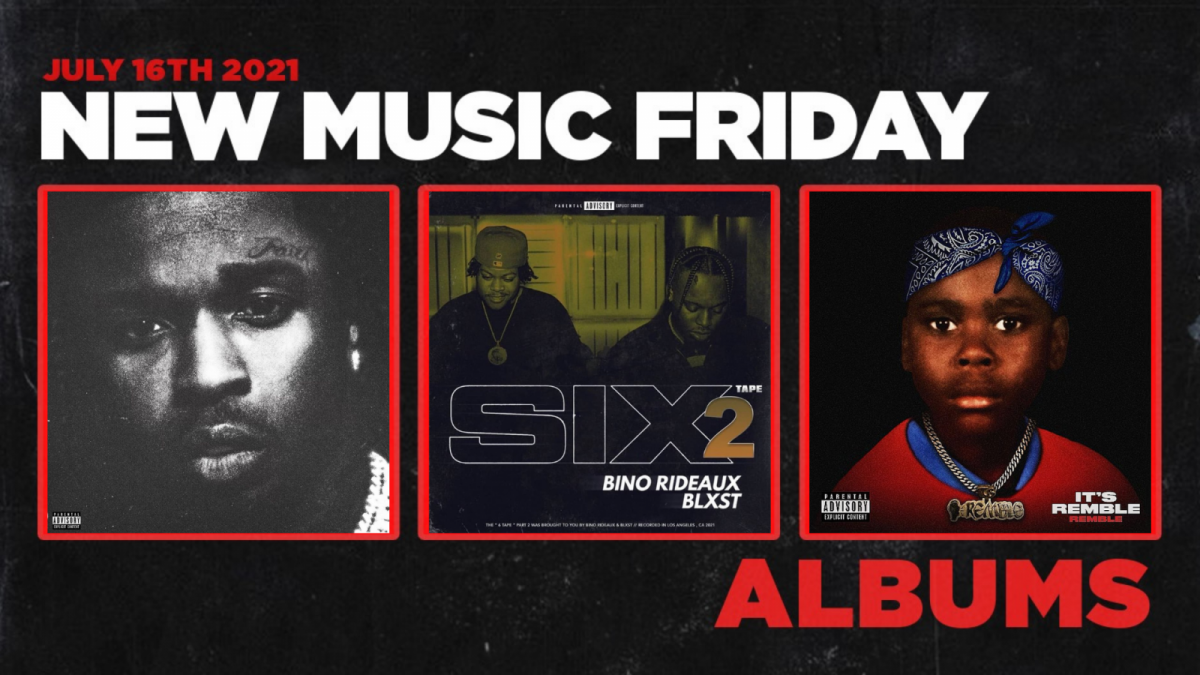 Today’s New Music Friday is a bi-coastal affair, with rappers on both ends of the country dropping fresh new albums. From New York to Los Angeles (and a few in-between), these projects are not to be missed.

Regardless of your thoughts on posthumous albums, it’s undeniable that Faith, the latest offering from Pop Smoke is worthy of some real attention. A$AP Ant’s Marino Infantry also dropped Enter The Infantry, Vol. 2, full of features from the Mob and beyond.

On the other side of the country comes Remble with the viral rapper’s debut mixtape, It’s Remble, while HipHopDX Rising Star Blxst linked with Bino Rideaux for Sixtape 2, a follow-up to their 2019 EP.

Keep reading for HipHopDX’s complete coverage of all the best albums to drop Friday (July 16) below.

Over a year has passed since the loss of Pop Smoke, New York’s biggest rap star since 50 Cent. Last summer brought the release of Shoot For The Stars Aim For The Moon, a behemoth posthumous release which, after debuting at No 1, hasn’t left the Billboard 200 since its release. Faith, Pop’s second posthumous album has now arrived, giving fans more of what they’ve come to love from the late Brooklyn MC.

With a breathtaking array of features from the likes of Kanye West, Pusha T, Dua Lipa, Kid Cudi, Pharrell Williams and many more, Faith comes less than a week before what would have been Pop’s 22nd birthday.

San Pedro rapper Remble sounds like nobody else in the rap world, not even like his fellow Stinc Team affiliates. Enunciating each word with a sharp humor, Remble quickly and repeatedly has gone viral with tracks such as “Gordon R Freestyle” and “Touchable,” with listeners drawn to his crisp bars and brazen originality.

IT’S REMBLE, the debut project from the new Warner Records signee, features 13 songs, six of which are brand new, plus a handful of new tracks which have been previously released in the form of singles.

Blxst and Bino Rideaux have proven the efficacy of their chemistry on the first edition of Sixtape from 2019 and now they’ve done it again on Sixtape 2. The duo’s latest offering is ripe with the melodic crooning fans grew to love on the original, but both artists have fined-tuned their craft in the past two years and the results are clear.

Where Blxst’s voice dominates the music’s upper end, Rideaux’s slurred flow rests on the lower end of the sonic landscapes, proving a satisfying balance and versatility to tackle whatever beats they come across.

KSI – All Over the Place

The U.K.’s KSI is the definition of a modern-day renaissance man. The 28-year-old from Watford, England first made a name for himself as a YouTuber, regularly uploading gaming content and vlogs to his account. In the following years, KSI transitioned into a rapper, blending dancehall and drill influences over melodic beats.

On All Over the Place, the third album in KSI’s discography, the rapper appears to have found more confidence, exploring new sounds ranging from Drake-esque drums to fast-paced Reggaeton.

Drakeo The Ruler – Ain’t That The Truth

Drakeo took to Instagram late Thursday (July 16) announcing a surprise release of Ain’t That The Truth. The Los Angeles rapper has experienced a major glow-up over the past two years after his release from prison and the subsequent Drake-assisted “Talk To Me.” The success clearly hasn’t changed Drakeo, as he continues to drop music with the speed of a Tommy gun.

Ain’t That The Truth features the same Drakeo fans have come to love since the early mixtape days, but now with support from EST Gee, Shy Glizzy, Peezy and more.

A$AP Ant, a longtime member of Harlem-based collective A$AP Mob, came through this week with Enter The Infantry Vol. 2, a feature-heavy follow-up to his seminal project from 2019. Also the founder of the streetwear brand Marino Infantry, the Baltimore rapper’s latest arrives with a whopping 31-song tracklist and equally jaw-dropping array of features including familiar faces such as Lulu P and A$AP Twelvy and a range of beats made from the likes Lord Fubu and rising producers Ran Van Dam and Jonboy Ice.

On today’s edition of New Music Friday, Honorable Mentions go to Kalan.FrFr for the deluxe edition of TwoFr 2 and Faedaway’s faecity.