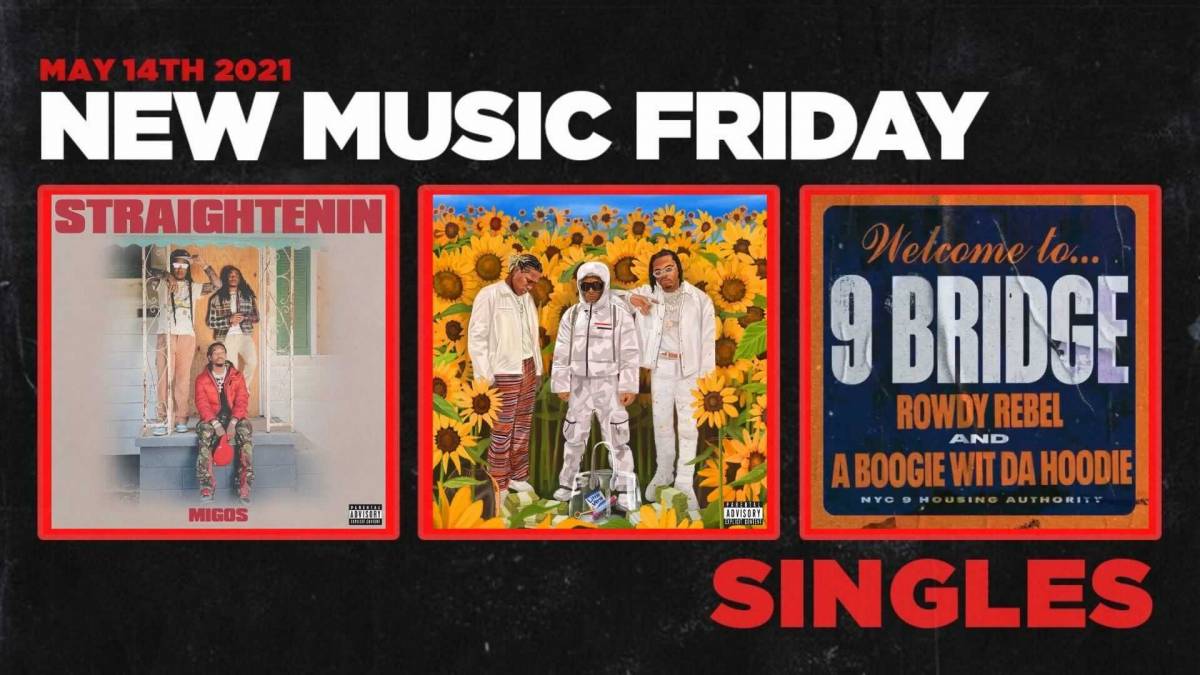 We can’t think of anything better than a star-studded New Music Friday arriving in wake of the CDC’s new announcement that fully vaccinated Americans can now go maskless in most indoor and outdoor settings.

To celebrate the beginning of the return to normalcy, we’ve put together an especially loaded roundup of all the best singles that dropped on the week ending in Friday (May 14th.) To kick things off, the brilliant producers behind Internet Money linked with Lil Uzi Vert, Don Toliver and Gunna for the summer-ready “His & Hers.” Migos also released “Straightenin,” the Atlanta trio’s first song of 2021.

The music doesn’t stop there, so keep reading for complete coverage of the best singles from this week’s New Music Friday.

Over the past few months, the Migos have found their way into the news for reasons other than rap. Quavo, Offset and Takeoff have all undergone accusations and various scandalous affairs, but now the trio is attempting to take hold of their narrative, releasing their first song of the year, “Straightenin.”

With a typical Migos bounce, “Straightenin” in many ways is a return to the group’s roots of nonstop, energetic triplets. Fans who have been listening to the leaked snippets of the track which have been floating around since early April must certainly be thrilled to hear the song in full.

The Barbz are a different breed of fan: that’s not new. But their reaction to hearing news of new music from Nicki Minaj was ecstatic, even for rap’s most notorious fan group. “Seeing Green,” the most recent single from the legendary Trinidadian rapper, is a necessary release from Minaj, whom, apart from a small handful of singles, hasn’t released music in years. With nostalgic features from Drake and Lil Wayne, “Seeing Green” is bringing us back to the early days of Young Money.

“Seeing Green” arrived alongside Minaj bringing Beam Me Up Scotty, her 2009 mixtape to streaming services for the first time.

Nick Mira and Taz Taylor, the co-founders of production team Internet Money know how to make a hit. They’ve proven it countless times through tracks such as “Lemonade,” “JETSKI” and “Blastoff,” and know they’re back again for “His & Hers.” Featuring Lil Uzi Vert, Don Toliver and Gunna, “His & Hers” is a warm and airy anthem primed for the summer.

Gunna and Uzi are fantastic, but it’s the welcoming crooning of Don Toliver that sets “His & Hers” apart.

When Lil Gnar, Ski Mask The Slump God and Chief Keef are all featured on the same track, you can expect an anthem full of energy and rage. Lil Gnar, the skateboarder-turned-designer-turned-rapper has been on a war path of late, first with “Not The Same” featuring Lil Skies, then with the Yak Gotti and Foogiano assisted “Facts” and now with “New Bugatti.”

We’re suspecting an album is coming from the Atlanta rapper to follow-up his 2019 project FIRE HAZARD.

As the sounds of Drill continue to flourish in New York, listening to “GLACIERS,” the latest single from Queens, New York rapper Akinyemi hits like a dip in ice-cold water.  Introspective lyrics tumble from Akinyemi’s mouth as the 26-year-old rapper reflects on the places he’s lived, the sites he’s seen and how they’ve impacted his view of the world.

REBORN, Akinyemi’s debut album, is slated for a late June release, so keep an eye on Akinyemi over the next few months.

The season of Pi’erre Bourne is here. Earlier this spring, fans were first blessed with “4U,” a video-game inspired track full of digital sounds and floating, untethered bars. Now the Atlanta producer and rapper is back with “Groceries.” Set in the same sonic landscape as “4U,” “Groceries” is entrancing and delightfully simple.

Whether Pi’erre is producing hits for Playboi Carti and Lil Uzi Vert or for himself, he’s one of rap’s most interesting and unique artists: each release is a joy.

A Boogie Wit da Hoodie and Rowdy Rebel are both from New York, but the two might as well be from different universes. Where A Boogie hails from the Bronx, steeped in melody, Rebel’s deep growl comes straight from Brooklyn. Though the artists come from different boroughs and different genres within Hip Hop, their collaborative track “9 Bridge” sounds organic and instictual.

Rebel’s bark is softened for “9 Bridge,” matching the singing of his Bronx counterpart over light piano notes and a knocking, jagged synth.

T-Pain might not know how to properly use Instagram, but luckily the Hip Hop veteran knows his way around a song. The Auto-Tune legend linked with Kehlani, one of R&B’s brightest stars for “I Like Dat.” In a cross-generational collaboration, Kehlani and T-Pain have remarkable chemistry.

The duo shared a snippet while on Instagram Live earlier this week, and the full track doesn’t disappoint.