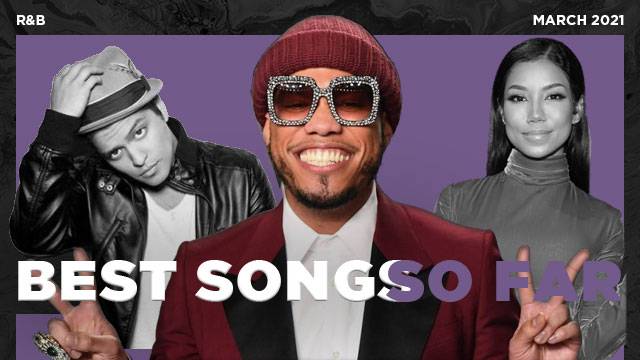 2021 is off to a good start melodically with some of the genre’s heavy hitters dropping new songs. In March, fans received new songs from Jhené Aiko, Giveon, Gallant and R&B’s newest duo Bruno Mars and Anderson .Paak aka  Silk Sonic.

Every month, HipHopDX puts a spotlight on the tracks that stand out from the overabundance of releases throughout the year, highlighting everything from Billboard chart-friendly singles to essential album cuts. Check back at the beginning of every month for updates and check out our other lists and our playlist below, which includes all of the songs mentioned in this article and more:

The results of combining two Grammy Award-winning, neo-soul and R&B genre bending artists is without a doubt Bruno Mars and Anderson .Paak’s inaugural Silk Sonic duo single “Leave The Door Open.” The smooth-rolling, sensual bedtime banger is a looking-glass window into the golden age of the Motown sound. Overflowing with soulful vocal performances and funky instrumentation, “Leave The Door Open” is that good-good R&B our parents told us about while growing up.

Joyce Wrice has been making music since 2015 but seems to be pushing the right buttons for a breakout in 2021. After scoring a viral hit in 2020 with “That’s On You,” including a remix featuring fellow rising R&B artist UMI, the 28-year-old Japanese-American has dropped her debut album Overgrown to glowing praise. The jovial cut features a bouncy groove reminiscent of Brandy’s “Best Friend,” Her Hip-Hop/R&B fusion is a welcome callback to great sounds of the past like Ashanti and Mariah Carey, with Wrice making the style her own. There’s also contender for best rapper in the game, Freddie Gibbs, casually coming through for a thugs-need-love-too feature done right.

The ethereal Far Eastern soundscapes of Jhene Aiko’s “Lead The Way” and the song’s lyrics read like an enlightening Taoism scripture (“Tao” translates “the way” in English). The song is the first track and lead single from Disney’s animated film Raya and The Last Dragon. Aiko softly glides over the track with breathy mid-to high-range vocals for nearly four minutes, offering words of wisdom that anyone can use for self-help on a sad day.

It’s probably not a good idea to bring your girl around Giveon. His sultry baritone is arresting, soothing and magnetic when he’s singing his regular love songs. But on “All To Me,” he uses his powers for willful persuasion and seduction. The way he repeats “all to me” on the bridge after convincing a neglected woman to cheat on her boyfriend is deviously affable and self-assured, like a supervillain getting one over on the townspeople.

Ty Dolla $ign has become known as the industry-wide x-factor when it comes to collaborations, providing hit-making assists on chart-toppers like “Hot Girl Summer” and countless other smashes — hence his befittingly tilted Featuring Ty Dolla $ign album. The OG version of the album’s lead single “By Yourself” featuring Jhene Aiko exudes a level of creative synergy that is only matched by the Bryson Tiller-anchored remix.

L.A. vocalist and HipHopDX Rising Star Blxst’s 2020 come-up was swift and catalyzed by his acclaimed No Love Lost (Deluxe) album — which aligned the singer with West Coast headliners such as Ty Dolla $ign, Dom Kennedy, and Tyga. Though momentum of the project has carried over into 2021, Blxst remains steadfast in his approach to releasing lifestyle vibe enhancing grooves whilst also delivering purposeful collaborations. Take the two-piece Just For Clarity single “Fck Boys” as evidence of Blxst’s commitment. The song features Russ functioning as the soundtrack to modern chivalry for the hood’s renaissance man.

Gallant understands the power and purity of late-night inspiration. It’s the basis of his standout single “Comeback,” off his latest EP Neptune. Speaking to Revolt, the Maryland singer said the song came from notes he typed on his computer, eventually leading to a studio session where he told himself he wouldn’t leave until something was created. The result is an introspective look into his egotism culminating in a pleading apology to his former lover. The track uses several tropes of early 00s R&B, including slick acoustic guitar lines, layered background vocals and the iconic “OH!” It’s a slice of Usher and Mario influence served up for 2021, and Gallant has the range to pull it off.

A beat from Kaytranada isn’t simply a platform for artists to rap over. Each track is an expansive world, built carefully and intentionally from smaller components — a snare hit here, a slightly distorted synth note there. The Canadian producer approaches his work like a painter with a fine brush, filling the canvas with blended notes.

“Caution,” the latest single from the 28-year-old instrumentalist, is lush and off-kilter. The influence of famed Detroit producer J Dilla is apparent throughout the song, though it’s also ripe with motifs from Afrobeats and even the digital sounds of House music. While Kaytranada has produced excellent tracks for rappers including Vic Mensa, Syd and GoldLink, “Caution” is a refreshing track that creates room for the producer to shine.

In the opening moments of “Fight For You,” which is featured on Judas and the Black Messiah: The Inspired Album, H.E.R.’s voice breaks through the thick horns like direct sunlight shattering a ceiling of clouds. Her voice is rich and unwavering as she demands change. “Long as I’m standing, we can never lose/I’mma always, always fight for you,” she sings.

At this point, H.E.R. is such a mainstay in contemporary R&B, a singer with such mature assuredness, that it’s crazy to think she’s only 23 years old. On “Fight For You,” which was self-produced alongside assistance from D’Mile,  the Vallejo, the California singer evokes memories of legendary R&B acts such as Billie Holiday. But H.E.R. is unapologetically herself and that powerful independence, clear on “Fight For You,” is a crucial component to her astronomical rise.

The journey during the come-up for an artist is littered with people who try to take credit for their success. Both Mahlia and Rico Nasty understand the frustration when former friends, collaborators and lovers try to downplay the success they’ve earned out of pure spiteful jealousy.

That shared experience between two genre-hopping badasses acts as the secret sauce to Mahalia’s latest single, filled with enough punchline haymakers and unbothered attitude to silence any hater.

R&B could never be dead while Chloe x Halle are making music. The R&B duo, comprised of sisters Chloe and Halle Bailey, have overtaken the genre with a ferocity. First with Ungodly Hour, and now with Ungodly Hour (Chrome Edition), which includes two new tracks and a vinyl run.

“80/20,” one of the two bonus songs, is a flirtatious exploit, with the girls singing about desiring more than what their monogamous partner can offer, while looking elsewhere for the 20 percent they need. They flip traditional stereotypes on their heads, running through boys with zeal. They shun conventional gender expectations through a tongue-in-cheek teasing and a bubbly delivery.

DJ Dahi immediately sets the tone for “Gravity” with a soft, rolling surf guitar loop, driven by a spare, dragging kick drum. It’s a lilting, simple production that leaves plenty of space for Brent Faiyaz’s layered harmonies. The Columbia, Maryland-born singer might only be 25 years old, but he writes love songs like an old soul, detailing his romances with wit and a mature frankness.

Faiyaz tapped Tyler, The Creator for his latest, a man who also knows his way around a good love song. Tyler’s more abrasive voice marries perfectly with the smooth production of DJ Dahi and Faiyaz’s soulful crooning.

The Queen of R&B is back. All eyes turned to her with last year’s release of “Good Days,” which also featured Ty Dolla $ign. Her latest track “Good Days” has now arrived and the ball is in the TDE singer’s court. SZA’s run of exceptional production continues, with an all-star assembly of Los Hendrix, Nascent, Carter Lang and vocal magician Jacob Collier.

“Good Days” also marks SZA’s first entry into the Billboard Hot 100 as a solo artist, peaking at the No. 10 spot weeks after its release. SZA seems to be leaning back into the sounds from her instant-classic Ctrl, a welcome return for her fans.

Reaching back into The Prelude EP, Pink Sweat$ taps Kehlani to afford his angelic “At My Worst” love song a second wind. The easy-going ballad is the perfect balance of sauntering vocals and entrancing guitar riffs elevated by minimal drum patterns. Additionally, the conversational verses of both Kehlani and Pink Sweat$ provide make the song incredibly endearing and relatable.

At the height of Featuring Ty Dolla $ign, the Taylog Gang vocalist’s Post Malone-leaning “Spicy” collaboration dominated the airwaves and eventually peaked at No. 44 on the Billboard Hot 100 chart.

Now, with the additions of YG, Tyga and J Balvin, the tangy audio has yet another peppery pocket for listeners to fall into. And the spanglish vibes Dolla’s twists into his flows coupled with J Balvin Spanish-speaking bars, “Spicy” has effectively become a bi-lingual hit.

Though the album bears the name Heaux Tales, Jazmine Sullivan’s new project listens more like a sultry collection of tracks inspired by pleasures of the flesh. The lust-filled dynamic of “On It” featuring Jazmine’s soul-sister Ari Lennox definitivelly highlights the delicate relationship between licentious vulgarity and relationship-based intimacy the entire album cleverly quantized. There’s also an intense soulful element to the record that is reminiscent of the type of visceral R&B classics such as D’angelo’s “How Does It Feel” from 2000.

Alternative R&B doesn’t quite classify DVSN’s Amusing Her Feelings track “He Said” featuring Miguel because it truly exists in a space of its own. Ignited by what is arguably pop/punk-tinged production and a very moody, semi-somber feature from Miguel, “He Said” crosses-over multiple genre guidelines in the best possible ways.

And with lead-singer Daniel Daley’s sexualized lyrics cascading over the top of the apocalyptic instrumentation, “He Said” is easily one of the most memorable tracks from the OVO duo’s recent deluxe offering.