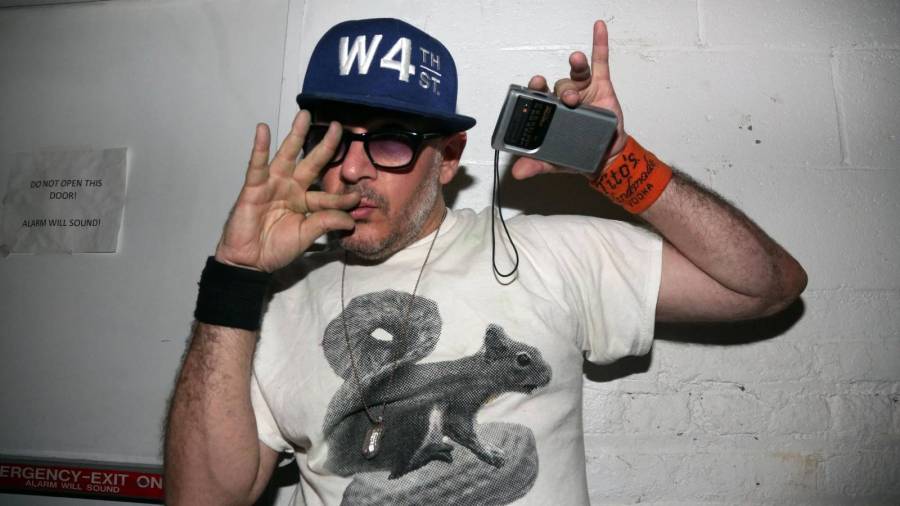 New York, NY – Famed New York City photographer Ricky Powell, who was often referred to as the “fourth Beastie Boy,” has reportedly passed away. According to a source close to Powell, he died of heart failure on Monday (February 1) at the age of 59.

News of Powell’s passing started making the rounds on Twitter with The Roots’ Questlove being among the first Hip Hop artists to pay tribute to him by quoting a lyric from the Beastie Boys’ single “Car Thief” in which he’s mentioned.

“Homeboy Throw In The Towel …” he wrote. “#RIPRickster.”

Homeboy Throw In The Towel… 😔 #RIpRickster.

But anyone who knew Powell knew he lived hard and often struggled with substance abuse. In the 2020 documentary Ricky Powell: The Individualist, filmmaker Josh Swade didn’t shy away from addressing Powell’s demons, including his “excessive drug use, hoarding tendencies and heartbreaking relationship with his mother.”

As he said in the documentary, “I’m a bum-y ass motherfucker, but my photography happens to be high falutin.”

Despite Powell’s struggles, he still managed to carve out an illustrious career any photographer would appreciate. He hit the road with the Beasties and Run-DMC on the infamous Raising Hell Tour and many subsequent Beastie tours, including the Licensed To Ill Tour and Check Your Head Tour in the late ’80s/early ’90s.

Rip 2 my man Ricky Powell. So NYC official… the parties when he would rock the slides.. the jokes and most importantly his capturing of life 🙏🏾 pic.twitter.com/qhinT9a10S

I have so many Ricky Powell stories . He used to call me Al-Skadal lol . What a guy. He will be missed. Smoking in your honor . 🙏🏽

He even threw in this extra pic of me & him with a nice note. 😢 RIP Ricky Powell, this sucks. pic.twitter.com/4NqNeg7ME4

Rest In Peace to RICKY POWELL – I know it's cliche to call somebody 'one of a kind' after they pass…. BUT RICKY truly was a ONE OF A KIND personality, There was Nobody like him. The man was a staple to NEW YORK CITY and his photography was iconic and loved WORLD WIDE.

R.I.P. Ricky Powell. Dayum, so many good times with the Rickster. We toured together during my time with the Beastie Boys. Man, this one hurts!!

Today we lost another legend, photographer Ricky Powell. His photography captured all my heroes coming up, from Kool Keith to Big L, Mike Tyson to Basquiat. pic.twitter.com/i9hv0Na7Lu

not ricky powell too. damn

“Homeboy, throw in the towel,
Your girl got dicked by Ricky Powell”

RIP to west village legend Ricky Powell. I can't count the times I have run into him in the village, with his camera, and we'd just shoot the shit. He always had jokes and was an original weirdo. pic.twitter.com/clmZ4dAMbc

RIP Ricky Powell. Man… I’ll never forget the hangs your crib back in the 90s, the never ending calls editing you column, or the crazy trip to Australia. You were there and had a camera when history was happening, and those images, like the memories, will live forever.

You're Going to Thank Me One Day :: NYC Photography Legend Ricky Powell Tells All. Here's his story. :: https://t.co/i7PLtUq6Nn pic.twitter.com/2sGi4WgNL4

Ricky Powell was one of my OGs. Always kept it a buck with me. Always called and checked in on me.

This is beyond heartbreaking, but his work is timeless and has a kind of energy that feels immortal.

Truly thankful for everything he has taught me, and what he shared w/ us. pic.twitter.com/SV8LLlR6dF

Rest In Peace. At 300 ENT’s office the walls were covered with nothing but pics by Ricky Powell. The other interns didn’t seem to care the history it displayed 🤷🏾‍♂️ https://t.co/uallngzTKv

"Homeboy, throw in the towel/Your girl got dicked by Ricky Powell" RIP https://t.co/vqc66SZPxA

I took this photo at Contact High: A Visual History of Hip-Hop. @ContactHighProj @AnnenbergSpace

Damm RIP Ricky Powell. The final towel has been thrown. A hero of mine & one of my first interviews when we launched rubyhornet. A one of one. He made me send him the questions & was gonna just do it via email. Several days later he called me to do it over the phone..