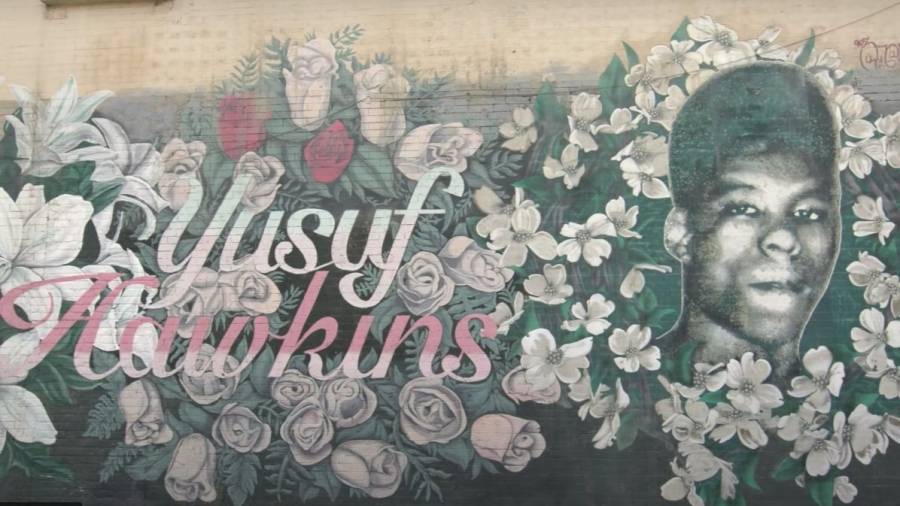 On Sunday (August 23), the 31st anniversary of Hawkins’ murder, the station announced in a statement they’d fired longtime executive Paddy Duke for his involvement in his death.

“After watching HBO’s Storm over Brooklyn, HOT97 was shocked and took swift action,” the statement read. “Paddy Duke is no longer employed by HOT97. The march for social justice continues.”

Duke, real name Pasquale Raucci, was among a mob of White men who crowded Hawkins and three other Black teens and attacked them in Bensonhurst, a predominantly Italian-American section of Brooklyn. The mob thought they were part of a different group of Black teens headed to a party at the home of a local girl the mob believed had begun dating a Black man.

The 16-year-old Hawkins was considered a leader amongst his peers and had dreams of possibly becoming an engineer. In the Storm Over Brooklyn documentary, friend Christopher Graham remembered Hawkins fondly as someone who was hard to guard on the basketball court considering he was left-handed.

Hawkins and company were in Bensonhurst inquiring about a used 1982 Pontiac advertised in the newspaper for $900. Soon, Hawkins and his three associates were being followed by a group of 10 White men that soon swelled to 30 men. Some held bats and begun yelling racial slurs at the group, “Let’s club the n*ggers!”

Soon, gunshots rang out. Hawkins was shot twice in the chest and later died at the hospital. Five members of the mob were arrested in connection with Hawkins’ murder, including Duke. Although he was found not guilty of manslaughter or second-degree murder, Duke was convicted on eight lesser counts and sentenced to three years probation and a $200 fine.

Duke’s ousting from the station has raised questions concerning the station’s hiring of Duke as well as whether knowledge of his prior crimes had been known by execs who’d given him a job. According to his LinkedIn profile, he’d served as the producer of Angie Martinez’s show and was an on-air DJ at the station from 1994 until 2003 before he became the commercial production director.

See reactions to Duke’s firing as well as the discovery of his involvement in Hawkins’ murder below.

America is a glorious place. Where else could someone who hates Blacks and goes out with a lynch mob and kills a Black teen reinvent himself as an executive for a radio station that features r-n-b x rap music? #pasqualeraucci #paddyduke #yusufhawkins #hot97

For those unfamilair: Paddy Duke is a long time exec @ Hot 97. Storm Over Brooklyn, HBO’s doc about Yusef Hawkins’ murder in 1989 has revealed he’s Pasquale Raucci, one of the teens charged and acquitted of killing Hawkins. pic.twitter.com/oFDHotnSVA

Re: last tweet – Paddy Duke is well-known staffer at Hot 97 for many years. Turns out his govt name is Pasquale Raucci and he's was in mob that murdered Yusuf Hawkins (and was convicted on lesser charges). This was unknown to listeners & at least *some* staff this whole time 👀 https://t.co/nPdmc6l2Yq

Are you saying that for 30 years you employed but didn’t know “Paddy Duke” was Pasquale Raucci, who was charged with manslaughter as a member of the racist mob that killed Yusef Hawkins?

Went to watch the HBO Yusuf Hawkins documentary but wanted to refresh my memory about the details of case & ran across this link.

I didn’t know that Paddy Duke of Hot 97 was Pasquale Raucci – same guy charged for manslaughter in this case. https://t.co/jMNA7IB6Gi

I remember listening to Hot 97 back in the days & Angie would shout out Paddy Duke’s name all the time. I had no idea he was involved in Yusef Hawkins murder 🤦🏾‍♂️🤦🏾‍♂️🤦🏾‍♂️🤦🏾‍♂️

This is what a slap in the face feels like! All these years of listening to #AngieMartinez on #Hot97 and hearing her talk to and mention #PaddyDuke aka #PasqualeRaucci, only to find out he killed #YusefHawkins! He was/is knee deep in our #culture #HipHop! This shit is disgusting pic.twitter.com/BjvPUXO3I1

This dude Pasquale Raucci spent a quarter century eating lovely from HipHop after chasing a Black kid down as part of a lunch mob. We could’ve been given the story of Paul/Pasquale instead of fuxbwoi Paddy Duke

This Paddy Duke dude that helped produce shows on Hot 97 for years, was apart of the mob that killed Yusuf Hawkins in Howard Beach.

The administration at @HOT97 need to answer for this Paddy Duke situation. Heads should roll.

I had no idea about Paddy Duke aka Pasquale Raucci’s involvement in the #YusufHawkins MURDER! I’ve been around this guy numerous times at Hot 97. Super wack!

Only can a white man lynch a Black man, get community service, get a little Puerto Rican shape up and a Yankee fitted and go eat off Hip Hop for decades.

restorative justice and all'at, but if everyone knew who he was like they are pretending to this week, how he cook so long at that raggedy station?https://t.co/aaIImiyTz6