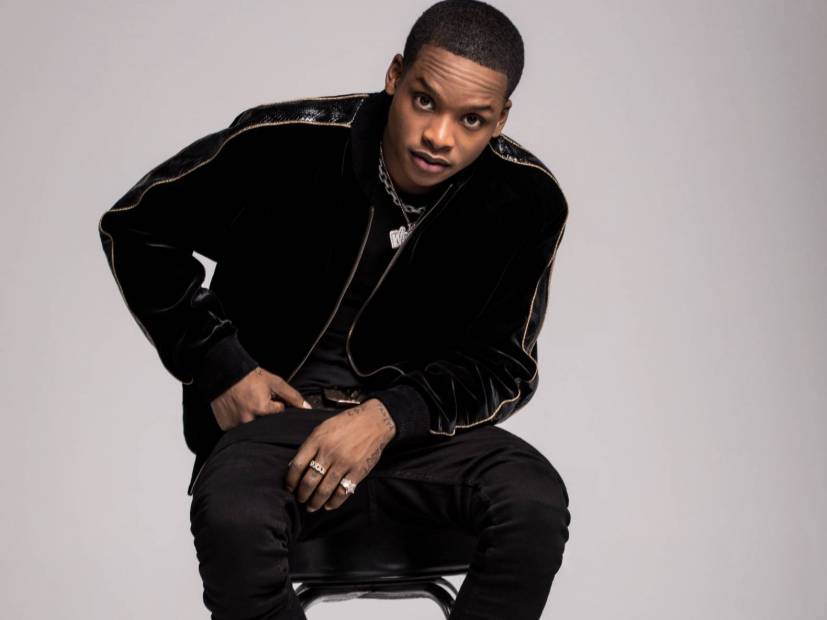 Family-oriented, creative, artistic — just a few words 147 Calboy uses to describe himself during an interview with HipHopDX on the heels of his Long Live The Kings EP release. The Chicago-raised, Atlanta-based artist discusses what it’s like to have a viral hit single, setbacks and his upbringing.

“Early life was cool,” he says. “At times, traumatic. I lost a friend early on. Witnessed death early on. I was probably 14, 15. I struggled with anxiety for a while, trying to find myself. I was always rapping, though. Before any of that. Going through the tough times while I was rapping that molded me to be the person I am now.”

He goes on to explain his close-knit family dynamic.

“I stayed in a house with 12 siblings in South Side Chicago,” he continues. “I’m in the middle, age-wise and I went to school with a lot of ‘em. School wasn’t hard or anything. I graduated on time. I’m close with all my siblings. We’ve always been together, our whole life. Two of them have different fathers, but we’ve always been locked in.

“Now, my brothers stay with me in my house in Atlanta and my mother has her own house in the suburbs outside of Chicago. One of my brothers is my road manager.”

The 20-year-old artist taught himself how to record and mix his own tracks at home using “YouTube and lots of practice.” He reveals he’s been making music since childhood but didn’t intend to be a rapper as a career until he graduated high school.

“I found it therapeutic,” he explains. “It helped with my piece of mind. You know, just to get everything out. As I grew older, I realized that’s all I ever wanted to do. I tried going to school — I went to college for one semester, fresh out of high school. One day I realized, ‘I have zero drive for this [school] shit.’ It was up from there.”

Though Calboy steadily released mixtapes throughout 2017 and 2018, it was the lead single “Envy Me” off his debut Wildboy EP that put the RCA signee on the map. However, Cal never expected it to be a hit.

“It was just a vibe in the studio,” he says. “My homies really pushed me to do that song, I wasn’t going to do it at first because I didn’t know how to rap on that beat, but I just went in the booth and free-styled it. We actually posted the song on my homie’s birthday flyer before we dropped it and all the comments were asking what’s the song. So we built the hype for it in the city, then we dropped it and it went crazy.”

Since “Envy Me” became a viral hit with over 100 million streams and plays to date, Cal’s life changed. He says he now gets recognized when he goes outside, especially in Chicago, New York and Atlanta.

“I enjoy it, doesn’t bother me,” he says with a shrug.

The track also helped get the attention of Lil Baby.

“I linked up with him through the internet,” he says. “When I was poppin’ with ‘Envy Me’, he personally called and invited me to perform at the Baby N Friends show. We’ve been locked in ever since.”

He further describes his transition into the spotlight, saying the only aspect he dislikes is “the business side of things.”

“Having to go zero to 100 so fast, you got to know your shit, be on your shit,” he says. “If you’re properly prepared, you don’t need to play catch-up. But that’s the only part I didn’t like —dealing with labels, the business side. It comes out of nowhere. Other than that it’s cool. I ain’t tripping. I’m enjoying the process.”

Fast-forward to February 21 and Calboy has dropped his Long Live The Kings EP featuring songs with Lil Baby, Lil TJay and G Herbo.

“Herb and I have been locked in for a while,” he says of the collaboration. “Me and Jay took off around the same time with the same producers. We had a middle man, producer JTK, who linked us. We have more than those two records, too.”

With the EP being just six tracks long, Cal explains the significance and hidden meaning behind the project, saying, “The EP is dedicated to the home-going of my friends, I lost six homies in 2019. So there’s six tracks on the EP. Two of my homies died from car crashes, the others from gang-related things. So each song on the tape is dedicated to one of the homies. The songs are just in their vibe.”

Cal also disclosed he’s working on a proper album, explaining, “This [EP] was something to hold fans over. The album is longer, more-thought out.”

In the future, he hopes to work with Ed Sheeran, Chris Brown, Kendrick Lamar, Future, Adele and Taylor Swift.

“I know Adele would be with it,” he says with a laugh. “I like her energy.”

He also cites Michael Jackson, 2Pac, Biggie and Sheeran as his musical influences, saying, “Growing up, I listened to a lot of alternative music, as well as the Chicago sound like G Herbo, Chief Keef.”

When asked if he’d ever include more pop or singing elements in his work, he reveals that a cross-over project is definitely not off the table, “It’s a process. I’m just trying to learn everything for now, but I definitely would cross-over in the future.”

Aside from his musical inclinations, Calboy almost immediately begins to discuss his interest and talent for different artistic mediums.

“I also draw and paint,” he says. “I’m trying to get into movies. Right now, I’m writing a book. I want to make it into a movie. A science-fiction book. It has little elements of my life in it, but it’s fiction. It’s totally crazy. So, I study a lot of movies and stuff. When the opportunity comes, I’ll be ready for it.”

Despite his unconventional, multi-faceted interests, Cal states he never felt pressure to conform, again giving thanks to his family for support.

“I always felt okay being different,” he says. “In a house of a lot of people, we were real family. We shared everything, slept in the same bed. They accepted me. We took care of each other, supported each other with whatever.”

The Chicago native has a lot to look forward to as he shares his upcoming goals, which includes “more multi-platinum plaques, a Grammy for sure. Also movies of course.”

He adds, “I’m different because I make the best music out of my class, for real. I’m multi-talented. I do more than just music with the painting, the book — I’m just a creative soul. Everything about me is art. I’m just different anyway — without trying to be. I’m just into so much different shit and that shows in my music.”