Now, with a loaded roster of young blood and the same tenacity for beaconing from the south, TIG has anointed the next pair of up-and-coming rappers, Alabama-bred signee Posa and his Mobile-based label mate Rubberband OG, to rise into the mainstream ranks with their latest 2SidesOfDaBottom mixtape serving as their entry backdrop.

Capitalizing off of the momentum cemented by his 2019 breakout mixtape Bolo, Posa explained to HipHopDX that though he has a plan in place for 2020, 2SidesofdaBottom was yet another improvised approach to crafting the music — which in a sense, is the only way he operates.

HipHopDX spoke via phone with Posa to discuss understand more about his off-the-cuff process, the journey leading up to his new 2SidesofdaBottom project with Rubberband OG, and a number of Alabama-related topics.

We in MY CITY TONIGHT for my listening party feat. My bolo @rubberbandog at @halftimesportsgrill ❗️I need everybody & ALL THE DJS, rappers, singers & Producers to PULL UP OG @biggarankin00 gone be there ima PLUG u in #2SODB🏚

HipHopDX: Can you explain a little bit about the inspiration behind the project? What does 2SidesofdaBottom mean to you?

Posa: Yea, basically, I’m from Mobile, Alabama and Rubberband OG he from Montgomery. We are two hours away from each other, you know Alabama sits at the bottom of the map. Mobile and Montgomery, so it’s just basically me, you feel me, giving my side on how I grew up and the things I went through and the hands-on experience of growing up in the hood I grew up in. 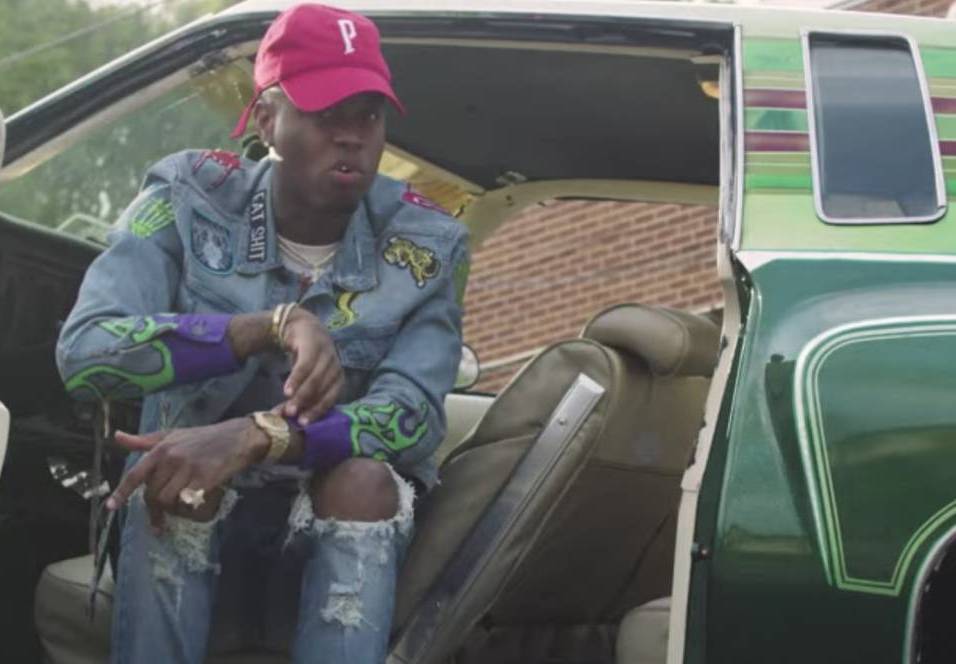 My two older brothers being in the streets — you know they influenced me to start doing music so that’s how I started with the rapping and shit. So basically what the mixtape about for real is me giving my side and him giving his side about everything we went through as individuals. Just through the streets, betrayal, enemies, homies turn to enemies — you know, the struggle, just coming up, dealing with depression, just a whole lot of mixed emotions, dealing with a lot of shit. Two sides to the bottom, I’m giving my side he’s giving his side — but we are both from Alabama.

HipHopDX: Coming from Alabama, how does it feel to have access to major platforms and outlets to release your music and what do you hope to do with your influence in your home state?

Posa: It’s an honor coming out of Mobile, Alabama itself because we don’t really have many opportunities for the world to see us because they see us so far at the bottom of the map they just think we milking cows and we ain’t got shit going on. But this shit is big, especially to be making a move like this, coming up and being on all the big platforms — like right now “Enemies” is on Worldstar right now and it is almost at five million views. It ain’t even been a full week yet it’s just been since Friday since it’s been released. So it’s just coming from everywhere. Now we got some light we can give other artists that are coming out of the city as well as Montgomery and help shine some of that light on the city. So we just come in and make a bigger impact and add to the impact it’s just gone open the door wide open.

HipHipDX: How do you think your upbringing in Alabama influenced your sound?

Posa: Me going through everything I went through like, coming up as a kid I seen a lot of shit growing up, like real young. The park that’s on Windsor Ave., that’s like two streets from my house, the crack house sits on Windsor Ave. too — so you got all this shit going on one neighborhood. You got niggas playing basketball at the park, niggas gambling, you got bitches from the neighborhood, all the dope boys fucking on they got money. And then you got the crack house on Windsor, you feel me —  where everybody be posted at, getting money, making plays at. It ain’t there no more, used to be there — but you know not even just all that, of course, there is violence and all that but it be good moments too.

Drop the 🔥emoji – “Whenever however wherever ” @phatlee_filmz🎥

Posa: We still might fight, but it wasn’t like we used to fight and go to kill each other the next day, we still will fight but we be cool the next day, just might fight again, you know what I’m saying.Posa: We have cookouts and block parties damn near every weekend — we will leave church on Sunday and go straight to the park, and everybody at the park on Sundays, everybody. The whole hood at the park. So that was my upbringing, you feel me, and other surrounding areas would be at the park because my hood sits goddamn, in the middle of the projects. My street same street as the projects. Birdville projects, that’s where No Cap from. RV (Rogersville Public Housing) that’s right there on the side of Birdville, that’s another neighborhood of projects. So that’s my whole bringing just running the streets when I was young, with my friends, or just running behind my brothers.

As soon as Lil Fred died I pulled up on Raven Dr. wayyy before Lil Hassan Gained his Wings🙏🏾🙏🏾brought the hood out & dedicated the video “Stay Scheming” to Lil Fred @thebackendchild keep smiling bolo you da blessing of da family Ya mama & everybody else proud of ya bolo❤️

HipHopDX: How did you and Rubberband OG link up and decide it was the right time to put out a project together?

Posa: Last year in 2019, probably around August,  I was doing shows and he was in the streets doing shows and we would bump heads and he had just released a project — that’s when I just released Bolo. So, we had already collaborated before, back in 2017, around the same time we both got signed to Think It’s A Game Records. So then people was like y’all need to do a mixtape together. So that has always been a thing, we just never acted on it. So it was just like perfect timing now — he from Alabama, I’m from Alabama, I’m from Mobile, he from Montgomery, we both some Alabama niggas. So shit we was like fuck it let’s go ahead and drop a tape. We got in the studio that night and we knocked that shit out in a couple of days.

HipHipDX: And what was the creative process like while you were recording the mixtape? Did you two collaborate on everything directly together?

Posa: Yeah we were in the same area — sometimes we would knock two songs out. And then how we did the video process like we would be riding through the hood and be like, man let’s shoot something right there. So then we would hop out, and catch a scene right there, and then hop out at another location and shoot right there. So it was always just on the spot type shit. It wasn’t ever planned out.

HipHopDX: Explain a little bit about the meaning of #2SidesTuesdays?

Posa: #2SidesTuesdays is just me and Rubberband OG just, you know, releasing content and staying in they face, you feel me. Just giving them different pieces from the mixtape. Whether that be something the can engage with or it might be a piece or something they were confused about. Or it may be something that they don’t know about and then they find out on that #2SidesTuesday. It could be anything from a video, another part of the documentary, just another piece of the sides to me and Rubberband OG. So we gone keep growing it as we growing the 2SidesofdaBottom brand.

HipHopDX: Can you talk a little bit about your journey from your break out Bolo mixtape to now and maybe what you felt like was the most memorable moment or highlight from it?

Posa: Basically man just seeing the reactions from it, and seeing it breaking the engagement I was getting before I released Bolo – because for real for real Bolo wasn’t even planned out. It wasn’t planned out either. It was like some last-minute shit for real. It was like, man you know, we gone end pushing this back so it’s just like, let’s give the streets something. Let’s give the people something for the time being until we release something else or release a project. So that was just like a, you know, a discovery project for the people who didn’t know me, you know what I’m saying, they became fans. Whether I was seeing one, two, three, four, five — the numbers started going up, you know, I was proud of all the numbers. That’s growth, you know what I’m saying. So that’s my most memorable moment, just being able to watch the growth from where I was to where I’m at now — and everything Bolo did for me, to where it put me at now. Now everybody screams ‘Bolo’ you feel me.

HipHopDX: How do you feel you have progressed creatively since the Bolo mixtape and will there be a Bolo 2?

Posa: I feel like I just got better. I’m not going to say I feel like I always been good — but I just became a better listener. My approach is better and I’m in a different space now than I was before when I dropped Bolo. I feel like this year gone really be my breakout year because of what Bolo did. “Dropping Jewels” hit a million views the same day 2sidesofdaBottom dropped — and it wasn’t no major promotion behind Bolo. Shit, I was just hitting the ground running in the streets. Definitely grew from it and definitely in a better space than I was — I plan on releasing Bolo 2 too, so be on the lookout for that. Probably sometime in April or May.

HipHopDX: What it is like being a Think It’s A Game artists right now? Do you have any collaborations with any other TIG artists on the way?

Posa: Look for new music from everybody that is on the label. Lucci, Rubberband OG, Dooley Da Don. Look for more collaborations, more videos on everything, to start. And then look for another project from me and Rubberband OG 2SidesofdaBottom 2. Look out for Kevin Gates to be on my next project — it might be a DJ Drama collaboration for Bolo 2. I want DJ Drama on Bolo 2 so make sure to write that in your tablet.

HipHopDX: What has it been like having an OG like Bigga Rankin on your side throughout your come up?

Posa: I’ve seen him take an artist from nothing to something — with Lucci, with a lot of niggas in the game man, he stamped niggas. You know, for me being able to get stamped by an OG in the game bruh you know that’s everything. That’s a lifetime achievement, a lifetime trophy. So it’s an honor to be side-by-side with OG Bigga Rankin because he already got the respect and he already paved the way — so it’s like, whatever he says they gone listen to whatever. They gone amen — and he ain’t co-signing no bullshit anyway.

HipHopDX: You mentioned Bolo 2 and 2SidesofdaBottom 2, but we’re also curious about what else Posa has in his plans for 2020?

Stream the full 2SidesofdaBottom mixtape below and watch the full video for “Cursed” above.