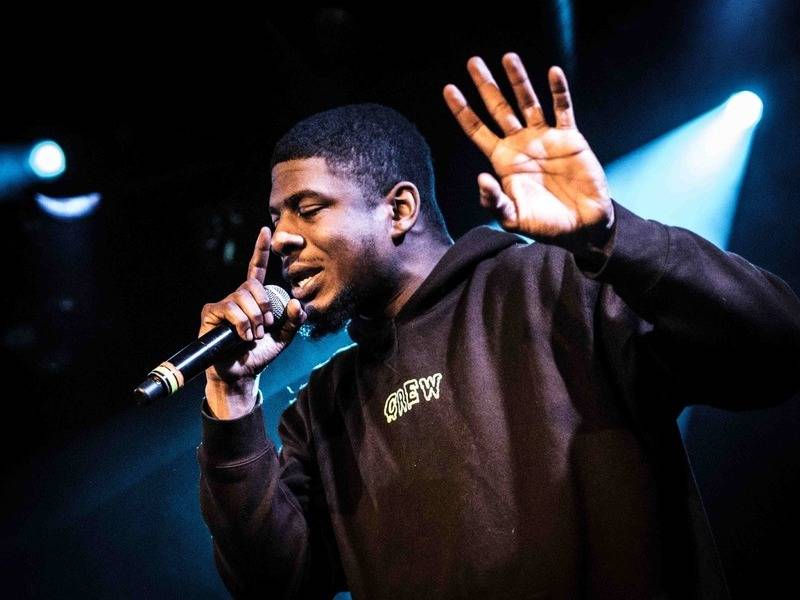 For young aspiring creatives, there tends to be a belief that money and quality are inexorably linked. When JAY-Z said “I’m tryin’ to give you a million dollars worth of game for $9.99,” on “The Story Of O.J.” the words mostly hit on an older demographic that grew up on years of Hov’s hustlers’ anthems.

For the younger generation that is more concerned with Instagram clout than stock portfolios, Mick Jenkins offers that same wisdom/cost ratio. “Drink more water” has famously been his mantra ever since his debut project The Waters dropped in 2014 and though he does encourage hydration, the phrase hits on a higher level of thinking, from the use of social media to prioritizing creativity over spending Mick is giving young artists the blueprint. It’s up to them to heed his advice.

HipHopDX spoke to Jenkins, who dropped his latest project Circus in January and plans to release his next full-length album later this year. He spoke on working with greats like Black Milk, and Kaytranada, the unity in Chicago that outsiders don’t see and revealed the true story behind the “Carefree Black Boy” video.

Mick Jenkins: Always. “Drink more water” has always been a metaphor for seeking more truth. We’re living in a time when you need to do that more than ever before. The misinformation that came out initially with the crash that involved Kobe is a prime example of that. That will continue to be something I say at my shows and an idea that I’ll continue to reinforce to people. Also, The Waters is such a beloved project of mine.

HipHopDX: Regarding misinformation, social media seems to play a big part in that, but as an artist, it’s also an important part of your business. What are your feeling on social media currently?

Mick Jenkins: My feelings on social media are constantly changing. It’s still a relatively new thing as far as what it can control and influence. I can say from personal experiences, social media is never not going to be a part of the conversation in my lifetime. It’s such a big part of my generation’s communication. It’s changed a lot, especially from when I started using it. My mindset at this point is just to be cautious. It’s a place I go for jokes, but if I didn’t have an artistic career I wouldn’t have it. There’s way more negatives than positives to it. You just gotta be careful.

HipHopDX: You’ve really built a lot of your brand on your own. Is that something you try to pass on to other artists trying to break through?

Mick Jenkins: Yes. Especially in my music, I think that comes out a lot. I tell people that they don’t need thousand-dollar studios and thousands of dollars of equipment and $15,000 mics. Not to say those things are useless but to get started, to get an idea out, to make something quality It shouldn’t be prohibitive. I recorded a lot of Circus on a $250 boom mic with no pop filter in my fucking back room. A lot of artists record the base to amazing songs on tour in a fucking hotel room. There are a lot of people who feel like they can’t get started unless they’re in a studio and have this or that thing. I just want to let people know it doesn’t always take all of that to do what you’re trying to do or have the effect that you’re trying to have.

HipHopDX: How was your experience connecting with Black Milk on this project?

Mick Jenkins: I don’t know what he brings out of you. I haven’t been able to work with him enough to compare those experiences to other artists. What I do know is that he’s super talented and with people of his caliber it’s always easy to work. I usually come in with direction and focus and ready to get to work, and usually that’s all a producer needs when they link up with an artist. It was seamless. I definitely want to use him more for my upcoming album. We don’t gotta say too much, if we do it’s real easy. Nobody feels like we’re stepping on each other’s toes to do a correction, or if we say “hey, try this or try that” It’s real familiar and seamless. I don’t wanna say easy but it be feelin’ easy.

HipHopDX: You also worked with another legend in Kaytranada.

Mick Jenkins: Me and Black Milk both from the Midwest and we’re both familiar with the same types of things and sounds and people growing up, and me and Kaytranada have a lot of the same musical influences. I think a lot of the people that I vibe with outside of music, when we decide to create music it’s always something special. Black Milk definitely falls into that category, and definitely same with Kaytra.

HipHopDX: You came up from Chicago at a time when the city was just exploding with talent and new sounds. How has the vibe in the city evolved from then until now?

Mick Jenkins: I don’t really know, because previous to that all I really knew was Cool Kids. You know Lupe and ‘Ye, but I didn’t live on the West Side so I wasn’t anywhere where Lupe was at, so my Chicago music experience started with The Cool Kids because they were tangible to me growing up, and it just seemed like more of a family, more of a community. It seems like it’s not just one person to me. It feels like anybody could be next. I hear about a lot of new young talent: Producers, photographers, rappers, singers and I’m familiar with names before the rest of the country, before people are blowing up and I think that comes from the community that’s built within the city. A lot of people like to talk about how Chicago is segregated in a lot of different ways, or like there’s a hater mentality but I’ve seen a complete 180 from that in the last few years with all the people that came up with me.

HipHopDX: Anyone in particular?

Mick Jenkins: All of them, Durk, Chief Keef, G Herbo, Noname, me, Joey Purp, Saba, everybody. I think people don’t know that these people have ties and are connected, and people be quasi-friends, and real friends, and best friends and even across this invisible line that nobody but people outside of Chicago draw, from the Drill side to the more creative side or whatever you wanna call it. I don’t think people realize how close some of us are. There’s so many people who don’t share that perspective but there are so many people who do. I especially see it with the young people that are coming up behind us. I feel like I see them linking up and together way more than we ever were when we were starting out.

HipHopDX: Who would be a person that you would say falls in the “up next” category?

Mick Jenkins: Monte Booker is killin’ shit already. Dude is like 20 or 21 and it’s crazy how young these people be. I was 28. I think back to when I was 21 and it’s just wild. I love Monte and Kari, those are two young dudes that I think are gonna be super huge in a couple years.

HipHopDX: The “’Carefree’ Black Boy” video looked like it came from a personal place. Is there a story behind that?

Mick Jenkins: The whole song actually happened. I was chillin’ with some friends at 54th Street, Hyde Park Beach in Chicago and out of nowhere like four police officers rolled up on us, flashing bright ass lights, yelling, poured out our liquor into the fucking water, and once we were at a place where we could actually talk about what was happening, they were like “What are you doing out here? The park’s closed.” We were like “when did the park close?” They said “11:00 pm.” It was 11:15. That’s what I talked about in the song. If the issue is the park closed 15 minutes ago, you could just say that.

Afterwards, we were thinking about the fact that we were on the beach, by the water. How did they get that close without us knowing? They snuck up. Four police officers with all their gear snuck up on us and flashed their lights at the last second and it’s like why? Just tell us to leave. (Laughs) I’ve been pulled over countless times in my Mustang with slick comments about how I got the car or what I must do to have that car. It’s been countless incidents so I had a ton of shit to pull from for that song.

Check out Mick Jenkins on Instagram @mickjenkins for more updates.