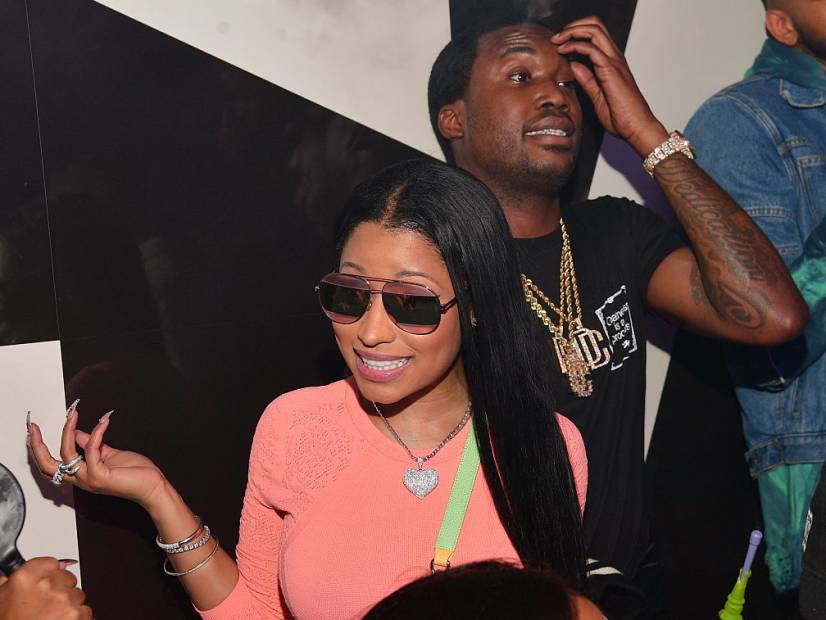 More than three years after calling their romantic relationship quits, Meek Mill and Nicki Minaj have given the world a front-row seat into their past drama.

Said drama unfolded on Wednesday (February 5) when Meek Mill reignited his disdain for his ex’s husband Kenneth Petty over his choice of fashion and Nicki responded with claims that he kicked her, “beat his sister” and sent his own mother to the hospital during an alleged undisclosed incident.

You beat your own sister and taped it. Spit on her & taped it. Kicked me in front your mother and sent her to the hospital. Sucking drake dick made u feel tough again. Move on.

Throughout the melee, Meek inadvertently admitted he’s expecting a baby with stylist girlfriend Milan “Milano Rouge” Harris writing, “My girl is with me pregnant watching me tweet about my ex is very clownish … Ima exit” in a since-deleted tweet.

Milly or Millie: What gender you think the baby is? A Milly? (boy) or Millie? (Girl)? Give me some name ideas too?? . . . Pants @milanodirouge Search: Plymouth on Milanodirouge.com Hair @bblazehairboutique

Equally flustered, Nicki revealed the reason she was mum on her brother’s rape trial where he was convicted guilty: “Imagine talking about an alleged rape of a child to hurt someone who wasn’t involved just so ppl can dislike me,” adding, “You can never stand on your own. You won’t tell ppl the mother is on tape asking me for $20 million to make the charge go away tho. U was around. U know. See u soon.”

Imagine talking about an alleged rape of a child to hurt someone who wasn’t involved just so ppl can dislike me. You can never stand on your own. You won’t tell ppl the mother is on tape asking me for $20 million to make the charge go away tho. U was around. U know. See u soon

While the verdict is out whether this e-beef will spill onto wax, the internet took great pleasure in the developing scenarios. Check out some of the biggest reactions below.

Drake on his own minding his business & somehow gets caught up in the Meek & Nicki Beef pic.twitter.com/eVdbNXE1SR

Me going back and forth to Meek & Nicki Pages pic.twitter.com/DNoX6MQQYi

Meek: You been knew your brother was raping that little girl!"

MEEK IS TRYING TO DEFLECT FROM THE ABUSE TO TALKING ABOUT HER BROTHER…. ABUSER 101 – Make the victim look bad. Deny/Deflect.

Meek Mill got a whole child on the way but he over here liking pics about another man ?

Meek a real one and we all know this …

What happened to "She was the baddest, I was the realest" #Meek #Nicki pic.twitter.com/WKunD2rlAZ

Meek is a domestic abuser, & has a history of violence against women. Notice he hasn't addressed this, but wants to shame Nicki for the actions of her brother, & deflects with LIES (Nicki didn't support her brother financially at all during this trial, nor did she bail him out) pic.twitter.com/iggySVlRbh

me tryna keep up with all the Nicki and meek tweets like pic.twitter.com/yvT1i2jG5l

this ngga was ALL talk at the store when he coulda made a move ?? btch made @NICKIMINAJ drag him his pssy ass pic.twitter.com/WaTnDr3U35

Nicki hiring a lawyer so she won't get extorted by the victims mother out of 20 million dollars when she had nothing to do with the crime is not the same as defending her brother, but 2 + 2=5 when Twitter bitches do the math so they're gonna take what meek said and run with it

Like, @NICKIMINAJ is out here living her best life and this frog still keeps jumping his way into her area ?

This Meek & Nicki beef is so childish… But so entertaining.