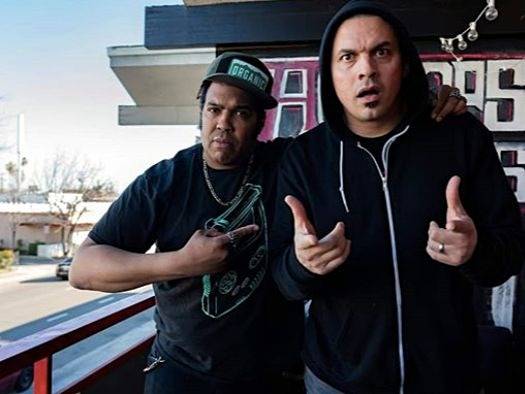 Living Legends MC Derrick “Aesop” McElroy has been in love with cooking ever since he was a child. Growing up, he’d watch his grandmother Hazel — who he calls a “magician in the kitchen” — whip up various dishes.

Now, the California native has spun that love and passion into his own cooking show, the appropriately titled Aesop’s Table.

“I studied everything my grandma did, trying to learn the ropes,” Aesop tells HipHopDX. “I had to watch over my two little sisters while my parents worked day and night shifts. I got very creative with what we had in our fridge and cupboards and kept that tradition while in college.”

Aesop’s time with the Living Legends also taught him unexpected lessons in the culinary world.

“Living Legends did a tour in Japan and I wound up staying after I met a girl I fell in love with and moved in with her,” he recalls. “I learned a ton of great traditional Japanese home cooking dishes during my year with her and grew to love all things Japanese.

“A few years later, I started posting my food creations on Reddit, Instagram and Facebook and gained fans and followers of my food. A lot of my style is making fusion dishes with different cultures, bringing the best of both worlds.”

Aesop’s time with the Living Legends — which also includes The Grouch, Murs, Luckyiam, Bicasso, Eligh, Scarub and Sunspot Jonz — prepared him for his current journey.

“Growing up with an eight-man crew of super talented musicians and egos helped me grow into the man I am now,” he explains. “We have always pushed each other to do better and bigger things and the years we have been together have helped me hone my skills.

“Also, three years ago I ran a Hip Hop radio station in my hometown of Fresno, which gave me the hosting skills needed to do this show proper.”

Unsurprisingly, Aesop finds music and cooking to be similar in nature and approaches them both with the same fervor.

“Cooking is art just like music and I put my soul into my food,” he says. “There are so many techniques in cooking. You really have to practice daily to hone your skills and get good at it, just like making songs and albums.

“I get the same felling of love and respect from making someone smile from eating my food as I would from a fan bobbin’ their head to my music. Knowing the food and music I make give people good vibes is the best feeling in the world.”

Along with his film crew TME, Aesop has already shot episodes with Atmosphere’s Slug, Fashawn, Haiku D’Etat, Murs and The Grouch, making it more like a family affair.

The inaugural Aesop’s Table episode features Slug and is expected to arrive on December 13. Until then, check out the trailer above.