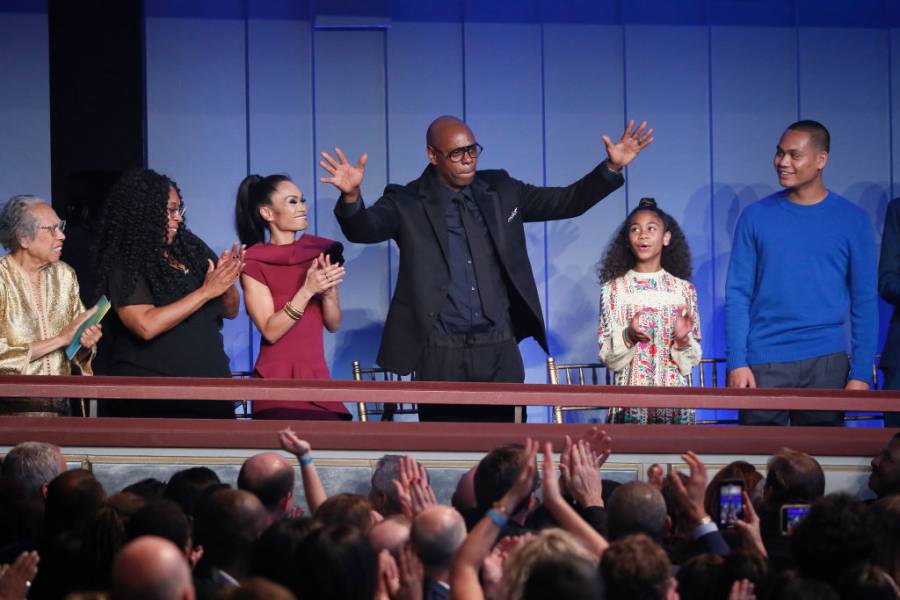 Comedian Dave Chappelle received a standing ovation as he received the Mark Twain Award for American Humor at Washington’s Kennedy Center for the Performing Arts on Sunday (October 27).

Chappelle, who has built a reputation on pushing boundaries, tested his own privilege during the ceremony, taking to the stage at the indoor event with a lit cigarette in hand.

“I want everyone in America to look at me smoking indoors,” he said to the crowd, reported The Grio. “I didn’t ask anybody. What are they going to do? Kick me out? This is called leverage!”

There were many familiar faces in the audience as The Chappelle’s Show creator received the prize for lifetime achievement in comedy. Chance The Rapper, John Legend and Common were all in attendance to honor the famed comedian.

Common also spoke to the crowd about Chappelle’s role as in society as a whole, making note that his influence is not limited to comedy.

“He’s always been a leader in thought and culture,” Common said. He says provocative things and I respect that. He brings uncomfortable things up and now we have to discuss it. I think he’s one of the greatest, not just entertainers, but the greatest minds we have in this day and age.”

According to The Grio, John Legend explained to the Kennedy Center’s audience how important the comedian is in the music industry during his tribute.

“He’s a gifted curator who blends different worlds seamlessly,” Legend said at Sunday’s ceremony. “That’s why you see so many musicians coming to this stage to pay tribute.”

Chappelle expressed gratitude for the award and for the arts community in D.C. Raised in Silver Springs, MD, Chappelle attended the prestigious Duke Ellington School of the Arts in Washington, D.C. He credited the city with giving him the courage to unapologetically embrace himself and his personality, a trait that led to him being the comedy legend he is today.

After being asked by WTOP Radio what it meant to receive this award in a city that he grew up in, Chappelle said, “An honor like this would be special anywhere that it happened but, you’re right; the fact that it’s happening here in Washington doesn’t make me feel like I’ve closed some kind of loop.”

Chappelle, who famously lives in Ohio, was humbled to be added to the list of Mark Twain award recipients. He has often stated how comedy greats like Richard Pryor and George Carlin were very influential figures in his career. Both comedians also received the Mark Twain Award, a fact that Chappelle did not take lightly.

“To be on a list with Richard Pryor is just unfathomable to me,” Chappelle said. “The shoulders that I stand on are all here on this list.”

The ceremony will be broadcast January 7, 2020 on PBS.