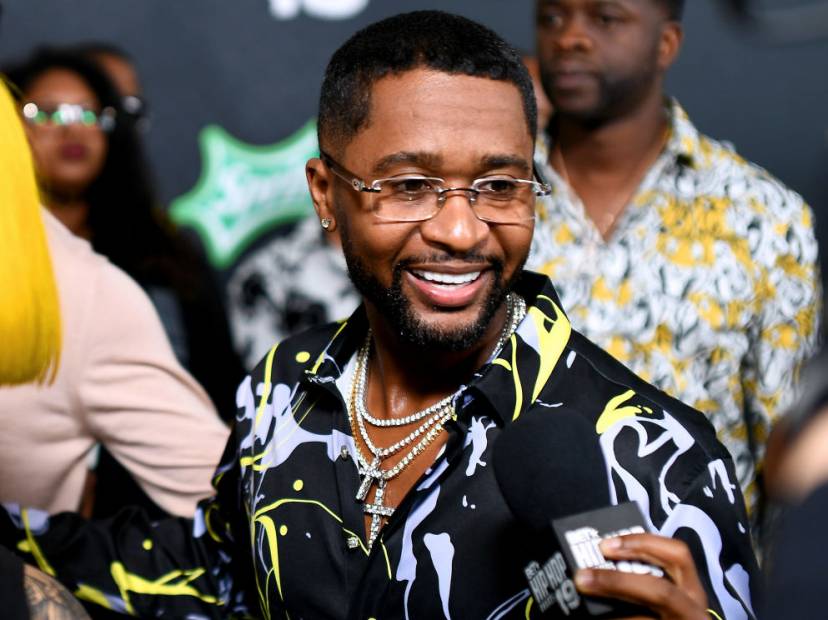 How had two Southern Hip Hop power players not yet collaborated? Only God knows. But this fall, Zaytoven and Boosie Badazz fixed that wrong by not only recording a song together but releasing a full collaborative project, Bad Azz Zay.

Zaytoven, hailed as the “Godfather of Trap,” has continued to stay relevant not only by continuing to work with his day one Gucci Mane as well as staying in the studio with Future but also by staying tapped in with the rising stars.

We spoke with Zaytoven about his recent work, including music, his role as a judge on BET’s The Next Big Thing and spending Nipsey Hussle’s last birthday with him.

HipHopDX: Why did you want to do Bad Azz Zay, a joint project with Boosie Badazz?

Zaytoven: I really thought it was odd that me and Boosie never even worked together all these years. So I think when we both finally connected, we both got on the phone with each other, we felt like it would be unfair just to do a song or two with each other. We should do a project together like streets deserve to hear a full project with Zaytoven and Boosie. So we both made that call, the first conversation we had, we went from there.

HipHopDX: That is kinda crazy you guys have never had one song. You would think at some point that would have happened.

HipHopDX: When did you first connect with him?

Zaytoven: Let me see, we put the project out [in September], so it had to be maybe a month or so [prior to that]. We just got on the telephone and said, “Aye man, let’s put a project together.” “Are you in town next week?” “Yeah, I’m in town.” We booked the studio and three, four days, we just knocked out just a whole lotta songs.

Zaytoven: Yeah, he work like I work. I like to create on the spot, spontaneous and try to do at least four, five songs back to back and that’s how he like to work, so it was perfect.

HipHopDX: I know that you like to just knock ‘em out and to have somebody equally on that page, that’s when you make your best work.

HipHopDX: Do you have a favorite song on Bad Azz Zay?

Zaytoven: I really can’t say because I like ‘em all so much. A lot of ‘em got different meanings and different tempos to ‘em. I could say “My Soul” because that’s on that slow piano, him talking real heartfelt, but then I like “Dance and Talk That.” There’s just so many different elements. I never can say one song is my favorite when I do a project.

HipHopDX: What do you think of his rebranding and how he came out of the pen and went from Lil Boosie to Boosie Badazz? What have you seen from him as he’s become still the same artist, but kind of a new artist too?

Zaytoven: When he got out, he was just more of a grown man, probably wiser. And he wasn’t as skinny as he was. He had muscle when he came out. So he had to drop the Lil on that. But it’s just amazing to see, a lot of times I do deejay shows, sometimes I do college shows where I have to go to Mississippi and Louisiana, those type of places. It just goes to show, a guy like Boosie, in certain places, he might not be the hottest, but in other places, it’s like he the king and there’s nobody that can take his spot or can replace who he is. I just remember doing a show and they was like, “Man, if you don’t hurry up and play some Boosie,” I’m finna get booed if I don’t hurry up and play some Boosie. He’s just one of the kings of the South. He’s like a real living legend. So it’s just amazing. It was a blessing that we got together to do a project together.

HipHopDX: Yeah, in the general rap conversation, he’s not always talked about, but if you know, you know what a legend Boosie is.

Zaytoven: That’s exactly what he is.

HipHopDX: I know “Dangerous Job” was the single, what made you guys pick that as the leading song?

Zaytoven: It wasn’t even really a single, a picked single. “Dangerous Job” was at the time I know NBA Youngboy had just got locked up, Kodak Black had just got locked up, A$AP Rocky he had just got locked up overseas. There was just a lot going on with just artists and rappers and we had did the song prior to any of them guys going to jail or anything like that. But I remember Boosie was planning on leaking the song on his Instagram and he would play the song, but it was pictures of A$AP Rocky or all the different artists or Nipsey Hussle and just a lot of things that was going on with the rap artists. So it was like you know what, this is a perfect time to drop the song and let people know how dangerous it is to be a rapper. So that’s the reason we just dropped the song the way we did.

HipHopDX: Obviously, sound-wise it’s a very lively song, but the message of it is very real. As hip-hop has become more mainstream, people maybe forget that hip-hop comes from a dangerous place. Rap is not all fun and games.

HipHopDX: I know you guys shoutout Nipsey on the song and you had met him, you guys were planning a collab project?

Zaytoven: Me and Nipsey had did like a mentoring program where we got an artist. Me and Nip were mentoring this artist from L.A. Rick Ross and Organized Noize was mentoring another artist and it was kind of like a battle. Which one of us can put together a song the best with the artist that we were mentoring? So our artist won, me and Nipsey. That was my chance to really meet him and talk to him and just see how cool he was and just feeling his energy was just something special.

So we had talked while we was in the studio like man, we gotta do some music together, since we done linked up and he was like bet, let’s do it. Let’s not even talk about it, let’s just do it. And it wasn’t not even a couple of weeks after that that he had passed.

HipHopDX: Yeah, that affected the whole community so heavily.

HipHopDX: Obviously, you’re an OG yourself and you have so much wisdom, but what did you learn from him or what did you pick up because his hustle is so different?

Zaytoven: He’s kinda like me, he’s laid back, he’s a laid back guy. Definitely had, you can tell he had good character, just the way he move and how he acted. It’s always good to just meet people in this industry, somebody as big as he is, to just have that type of character, that entrepreneurial spirit. It’s an independency, he’s not a guy that has to rely on anybody else or any labels or anything like that. He’s a self-made boss. So just being around those type of guys always influences me.

HipHopDX: You spent his birthday with him, right?

HipHopDX: That’s so special. You’ll have that forever. The Marathon Continues.

HipHopDX: I saw on Twitter someone asked about Beast Mode 3, are you and Future always working too?

Zaytoven: Man, me and Future have so much music, we could put out a Beast Mode 10 (laughs). But we always continue to work. That music, Beast Mode is all about timing, when we feel like it’s the right climate. So we always continue to work and do music and timing just tell us when it’s time to put out. The climate of the music lets us know, ok it’s time to put out another one, another project.

HipHopDX: Another artist you always work with is Gucci Mane and he had his album this year. He’s always dropping music, but what was special about Delusions of Grandeur?

HipHopDX: The song “Blind” Gucci says he asked you for that East Atlanta Bay shit because you’re from The Bay.

Zaytoven: Yeah, I’m from the Bay Area! That’s the Bay Area. That was the vibe we was on right then. We was just on that vibe. So it’s a song that me and Gucci did back in the day called “Big Cat LaFlare” and it got that Bay Area thing to it. It’s like man, we need to recreate one of those. When we go to the Bay Area, that’s they favorite song out there. We just wanted to recreate that sound.

HipHopDX: That’s definitely a fun one. And A Boogie Wit Da Hoodie’s on that.

Zaytoven: Yeah, we called him, we FaceTimed him. After we did the song, we Facetimed him like we need you to get on this song.

HipHopDX: I almost get the A$AP Rocky vibe, just the effortless coolness.

Zaytoven: Lately, I enjoy working with Gunna, it’s an artist NLE Choppa, been working with him. Juice Wrld, Lil Keed, Lil Gotit, I mean there’s so many of them, I don’t even want to start naming them. I’d have to name all of them.

HipHopDX: Somebody’s gonna get mad, “You didn’t name me!”

Zaytoven: Yeah! There’s so many of ‘em.

HipHopDX: I know it’s a cool thing that you do care about bridging the gap between the generations and staying in the mix with the young kids. Because you don’t have to do that.

Zaytoven: Yeah, that’s what I love to do. That’s what keeps me inspired, the young guys.

HipHopDX: I did want to ask about The Next Big Thing. What did you enjoy about being a part of that show?

Zaytoven: The fact that it was so different for me. Just to sit there and be filming every day. It was fresh air for me. I sit in the studio, a producer, all the time. That’s what I’ve been doing ever since I started, so to do something like that it was just fresh air. It’s just something I felt like oh, it’s something new for me to do. I really enjoyed it. I was looking forward to getting on set every day. Then I start getting attached to the artists that was performing and in the competition. So I definitely had a great time doing that. Then, the most amazing part was to come home and sit with my family and watch it on TV every week.

Zaytoven: It’s the same thing. I do the same judging when I’m in the studio. A lot of times, I work with new artists and artists that’s not established, so I’m always kind of critiquing and telling them what they should do and what I think they need to work on, so it’s pretty much the same hat.

Zaytoven: You know what, that’s the great thing about doing this music is a lot of times, I don’t really know what’s next. I’m just working hard, continuing to do what I need to do. Then God always brings up something new that I wasn’t expecting. So that’s what kinda keeps me excited about doing this too.

For more info on BET’s The Next Big Thing visit the official website.