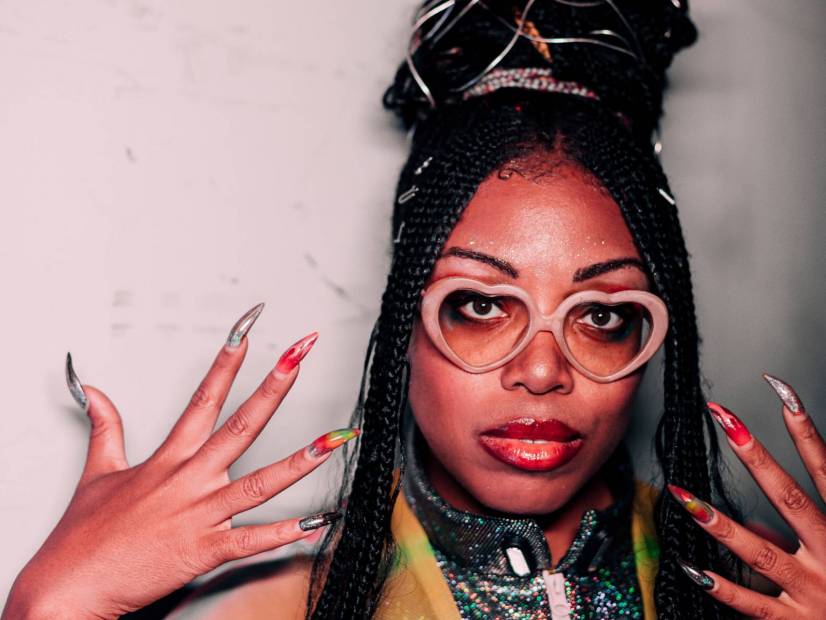 Though Philly may not have given Hip Hop the sheer numbers of a New York or Los Angeles, what they’ve done to widen the soundscape cannot be denied. Schooly D is credited with inventing Gangsta Rap around the same time DJ Jazzy Jeff and the Fresh Prince were dropping family-friendly hits. G. Love and Special Sauce fused Hip Hop with blues, while The Roots showed us how dope a live show could be with a full band in lieu of two turntables and a microphone.

Now, former Klipmode standout Suzi Analogue is expanding the sound even further – similar to what Flying Lotus did for the West Coast – with a sound that cannot be chained to a specific genre.

Suzi was one of the headliners at Red Bull’s Dizzyland, an event that celebrated queer and POC artists which is where HipHopDX caught up with her and she explained how one album in particular turned out to be life-changing.

“I wasn’t old enough when the Bobby Digital album dropped but when I found it as a teen I was obsessed with it because I was just getting into deeper listening. I was listening to it like, ‘he’s rapping, but I know he made the beats’ and that dual relationship was something I identified with early on because I realized I’m not just a songwriter, I was into Hip Hop and I’m into beats,” Suzi told HipHopDX in an exclusive conversation. “He’s a beatmaker, he’s rapping and he owns this identity: RZA as Bobby Digital, it feels like this whole world and it’s his world.

The “Jump Rope” creator was so enthralled by the Wu-Tang frontman’s project, she gave it a permanent place within her own identity.

“I had a friend that was like ‘yo, you love Bobby Digital so much, you should be Suzi Analogue, his counterpart’ and I was like ‘cool.’ Last year on 4/20 I played an event with him in Miami and it just felt like this was full circle,” said Suzi. “I didn’t get to talk to him cause he had his whole camp and they had him really padded in a corner but I just played my beats like ‘I know he hears this.’”

Suzi expanded her sound even further as a part of Klipmode (along with Devonwho, Mndsgn and Knxwledge). It was a time that, like Bobby Digital, inspired her to break boundaries even more.

“Klipmode was a time of heavy discovery for all of us. We didn’t let any of us become restricted. We were all in Philly in my apartment, we had the studio and we’d be playing Philly battle rap, and recite bars from that to each other just joking, but then we would go listen to maybe Gospel,” Suzi remembered. “It just varied. We never let each other become constricted and it showed in the imagination of our production. We were all just so imaginative so working together it was all about imagination and bringing that into the everyday,” she added.

On the subject of battle rap, Suzi spoke on why so many battle rappers fail to make the jump from underground rhyming into the mainstream.

“The reason why [going from battle rap into making actual songs] is a hard transition is because it’s a lifestyle change. When you’re just battle rapping you’re trying to impress the people around you and you catch a thrill off that. It kind of becomes addictive so then you’re just battling people all the time like ‘I’m the best’ and then when you have to sit in a studio for those people who are battle rappers that’s torturous,” Suzi noted.

“It’s quiet, there’s no other energy around. Battle rappers tend to thrive off the energy around them. It hypes them up, so it’s just a whole experience change that’s like exercise. As a producer, I try to keep all of this in mind because I try to coach or make everyone I work with feel comfortable enough to get through that. Artists are coming from so many places and there are so many talented rappers, but I would say for battle rappers, if you can’t really find how to be a recording artist just write songs for people because you will get paid.”