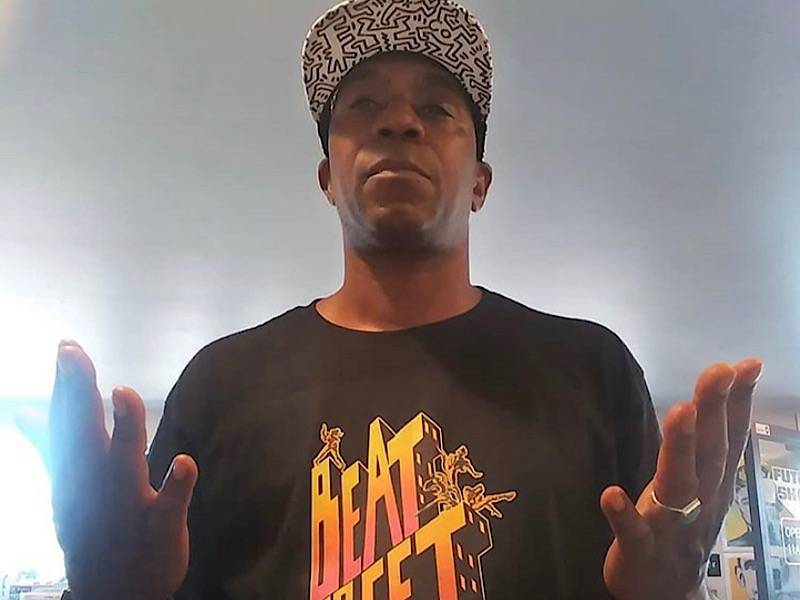 New York City, NY – For some producers, getting their beats into the hands of the people who need it most is an almost impossible task — especially in the internet age.

In an era where the wave is flooding comment sections or relentlessly peddling “like beats,” the story of how producer Ayatollah got his most iconic hit, “Ms. Fat Booty” to Mos Def is almost mind-boggling.

While the new generation has been made aware of their predecessor’s demo tape hustle, the Queens native took an unconventionally simple approach to get his beats heard by the key staff of the storied Rawkus Records — walking right in and asking to play them.

“I actually made like, four or five different versions of that [‘Ms. Fat Booty’] beat of with the Aretha Franklin sample,” he tells HipHopDX of the iconic single. “There was just different ways I chopped up the sample and stuff like that.”

The final iteration of the beat became part of a batch he compiled to shop to the legendary label, which boasted names like Mos Def, Shabaam Shadeeq, Company Flow and more at the time.

“I put all my beats on a CD,” he says, noting he had roughly four-beat CDs on him at that time. “I went up there a couple times, but I didn’t get the meeting right then and there. They were busy … the fourth time I went up there they let me in the building. I was like, ‘I got some beats I want to play for you.’ I didn’t know anybody at the label.”

Humoring him, former A&R Black Sean took him into a conference room, pressed play on his first CD and proceeded to have his mind blown.

“His face dropped,” Ayatollah says with a laugh. “He was like, ‘Yo, who are you? How long have you been making beats?'”

The two sat and played beats for hours. “People were walking by and popping their head in like, ‘Yo, what the fuck is this,'” he says.

A week removed from his meeting with Black Sean, Ayatollah was called back to the Rawkus office — and the rest is history. His music had resonated with just about every act on the label. Rapper Mos Def (who was working on his iconic debut Black On Both Sides) was drawn to a few of the beats on the CD, including what has since become one of his shiniest gems.

Virtually elusive, Ayatollah’s backstory is as Hip Hop as it gets. Having grown up in Queens during the late ’70s/early ’80s, he was engulfed in the culture.

Ayatollah largely credits his older brother, who was knee-deep in the music and fashion of the era. Ultimately, his love of turntablism is what got him his start in the industry.

“I got me some turntables like when I was about 15 and started buying records,” he explains, adding that he spent a few years in his teens rocking neighborhood parties. It was during these years that he also began to make his own beats.

“I was the DJ, but I got to a point where I wanted to make my own beats and stuff, but I didn’t have the equipment,” he says.” I didn’t know what I needed, and so I got myself an 8.5-second rack-mount sampler.”

There were obvious limitations with the hardware, but a chance connection would help the young upstart get his hands on the equipment that changed his life from an unlikely source — Intelligent Hoodlum (more widely known as Tragedy Khadafi) and the legendary Marley Marl.

“A friend of mine worked in a record shop that I used to go to buy records had told me to that Tragedy was looking for a DJ to go on the road with him,” he says.

That friend gave Tragedy his number and after calling and hitting it off, he took Ayatollah on tour — which was meant to support his Tragedy: Saga of a Hoodlum LP.

Tragedy pressed him further and realizing he’d been messing around but was limited by the capabilities of his hardware, he made a call to the legendary Marley Marl and attempted to get his hands on one of the machines in his collection.

“Two weeks after that discussion, he came back to my crib and had a shopping bag, and in the shopping bag there was an [E-mu] SP 12,” he says. “He was like, ‘This is something you could learn how to make beats on or whatever.’ I tried to learn on it, but I couldn’t really get it. I couldn’t really understand the SP.”

After a month, Trag came and checked in on his progress. After he explained he wasn’t getting the hang of it, the Juice Crew member took it back to Marley and returned two weeks later with an MPC 60 — the version designed by Roger Linn.

It’s a machine he still uses to this day.

“I got that, started making beats on it and I never looked back ever since,” he says. “I liked the way I understood the MPC 60 and all the capabilities. I just kept at it … Marley gave Tragedy that machine to give to me. Those two guys played a significant part in me making actually making beats.”

That experience blossomed into a fruitful career and a discography that includes work with some of the genre’s most elite.

Still, as we come up the 20th anniversary of the beat that changed his life, “Ms. Fat Booty,” it’s difficult not to see that as one of his most culturally significant records.

Some may argue that despite failing to deliver Rawkus its first platinum plaque, the record defined that entire era.

He adds, “It holds a good place in the Hip Hop … I guess you can call it that Golden Era.”

Ayatollah told DX he has a brand new project coming early next year that will feature both his beats and vocals. Catch some his memories, stories and scratch sessions via Instagram.