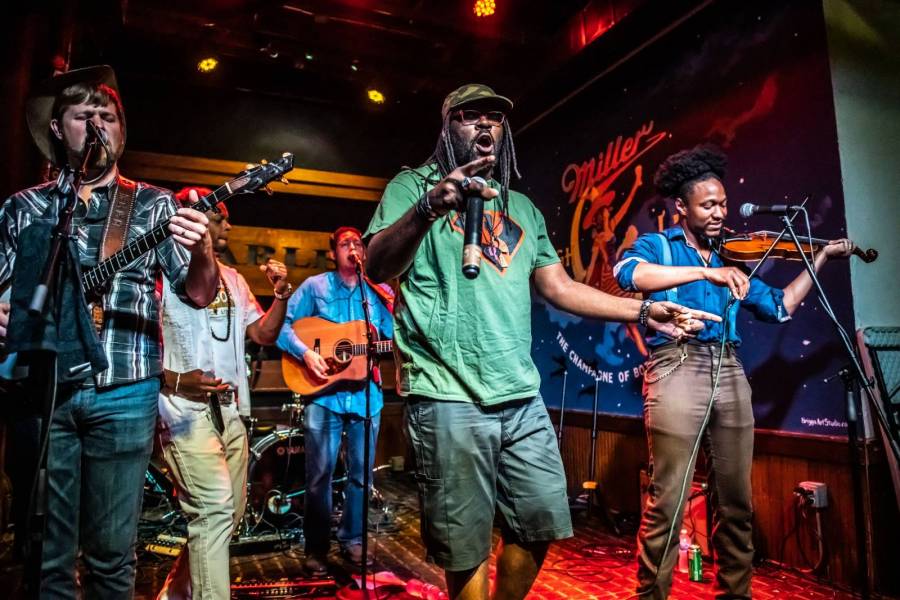 Gangstagrass' R-Son: The Old Town Road Was Paved By Us

Lil Nas X has dominated 2019 with one song and remix. “Old Town Road” set a new Billboard record with 19 straight weeks in the top spot shattering the old record held by Mariah Carey and Boyz II Men’s “One Sweet Day” and Luis Fonsi and Daddy Yankee’s “Despacito,” featuring Justin Bieber, both at 11.

Eight years before the breakout star became an instant household name, Gangstagrass created an organic bond between Hip Hop and Bluegrass. The climb has been a more steady one and according to one of the group’s two MCs R-Son The Voice Of Reason, it has been a journey that laid the tracks for songs like “Old Town Road.”

“The only reason he was able to get to an ‘old town road’ is because Gangstagrass had already paved it. And that is 100 percent true,” R-Son told HipHopDX in an exclusive conversation. “This is just my personal opinion. This is not the Gangstagrass view on that record this is strictly R-Son The Voice Of Reason. “I felt like that record was very much a ploy to get somebody out there. They got people involved in listening to a wider range of things. If that happened I’m fine with it.”

Rench, who produces the five-piece group founded them as an extension of a sound he had been crafting for years.

“Rench has been mixing various forms of Country Music and Hip Hop for a while. He does honky-tonk stuff, he was producing Hip Hop cats and trying to convince them to add some bluegrass elements to their sound and it didn’t really fly so he decided to do it himself,” R-Son remembered. “I wasn’t worried [about mixing those genres] cause Rench is a Hip Hop dude, as a matter of fact a lot of people don’t know Rench got bars, so he understands that at the end of the day if the beats are dope and you got bars on there it’s going to be dope. He has a very Hip Hop sound. He’s not like ‘let me take this country thing and this rap thing and smash them together,’ it’s very much an organic blend of the two forms,” he added.

The group, who has since done songs with Hip Hop legends like Kool Keith and Smif-N-Wessun, got a healthy taste of mainstream exposure when their song “Long Hard Times To Come” was picked to be the theme song for the FX “Justified.” R-Son notes how similar the outlaw style of Bluegrass is to Hip Hop.

“If you listen to a lot of Bluegrass and a lot of Hip Hop, a lot of what’s happening is the same stuff: Outlaw stories, crime stories, heartbreak. Both are very much a ‘this is what’s happening in my world’ sort of thing. We started a hashtag this past February at the Folk Alliance International in Montreal #hiphopmusicisfolkmusic,” said R-Son. “It’s probably the most influential and wholly American music form that exists.” Hip Hop is affecting more people’s lives than they even realize and so when you have that very broad base that connects with what’s going on in people’s lives, that’s the very essence of folk music. Hip Hop music is folk music, so the idea of blending the two together, particularly with Bluegrass which has a whole subgenre called “Murder Ballads”. So when Hip Hop is doing it it’s not something that hasn’t been done. It makes it very easy to blend.”

While “Old Town Road” appeals to the younger, more trap friendly generation, Gangstagrass takes a more lyrical approach to their rhymes. The Philly-bred MC maintains there is room for both but respect is due for the group that helped create the path to acceptance.

“There’s space for ‘Old Town Road’ but there is just as much space for what we’re doing because it is very deeply ingrained in both genres and what makes it really impressive is that Rench has essentially created his own thing and anything that comes after it in a similar vein it has to be viewed in a spectrum of ‘Gangstagrass did it first,” R-Son noted. “That might sound arrogant but it’s absolute truth and it speaks to how deep Rench is in both cultures and how he’s really able to merge the two.”

Gangstagrass will be playing Americana Fest September 12 in Nashville, TN. Catch it on Facebook Live if you’re not in the area.

special showcase we are doing at Americanafest with our friends @tikly @BreedloveGuitar @TwoOldHippies is going to be super fun! pic.twitter.com/PFvdxkvMTV