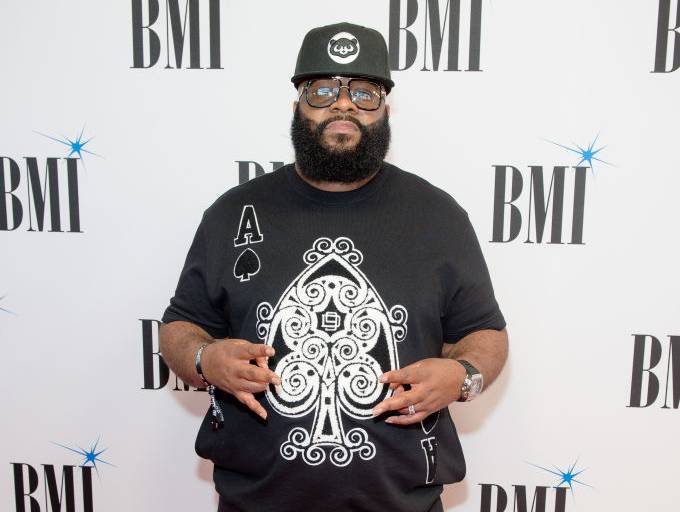 According to his wife, renown songwriter LaShawn Daniels has died at the age of 41.

Daniels’ widow, April confirmed via Instagram that the producer died in a fatal car crash in South Carolina.

With Love, from The Family! 💔 In lieu of flowers, donations can be made to the Lashawn Daniels Memorial Fund on PayPal at LashawnDanielsMemorial@gmail.com

Throughout his storied career, Daniels worked with juggernauts such as — and not limited to — Michael and Janet Jackson, Mary J Blige, Alicia Keys, Toni Braxton, Brandy and Monica, with whom the latter two stars he co-write their smash “The Boy Is Mine” alongside Rodney “Darkchild” Jerkins.

The entire music community is feeling the loss of one of the greatest to ever do it….. LaShawnDaniels…we just stood together a week ago. No words……

He is survived by his April and two children.

Once word of his death hit the internet, fellow musicians Kirk Franklin, Ari Lennox, Kehlani, Tank and more hit social media to pour out their condolences.

HipHopDX also sends condolences to the Daniels’ family. Check out the reactions below.

we was supposed go crazy next week… appreciate you for fuckin wit me OG.. your legacy will never be forgotten! this shit crazy! RIP Lashawn Daniels 💔

They don’t make em like @bigshiz! That’s the face you make when you’re legacy is not just about what you accomplish professionally but more importantly what you accomplish as a man. He was one of the best of us in every category you could think of. Pardon my human thoughts but there are so many people who don’t value life and make a mockery of what God has given but we have to lose him? A man who stood on principles, morals, spirituality, and the uplifting of the most high! What a man we have lost. What an example! What big shoes we have to fill! I’m lost.. I trust God but i’m concerned about this one. We needed him..🙏🏾 #RIP

I spent a lot of time with Shiz. One of my favorite stories from him is when he told me when he knew he was ready to get married and how he knew his wife was the one. We talked about this when I was in height of my single/wild phase. His words from that day had and still have a profound effect on me. Not only was he an incredible creative, he was a genuine and giving person who loved his family and adored his wife. And every time we were together, he kept me laughing so hard. We spoke earlier in the year about getting together and doing some work. My mind is blown right now and my heart is heavy. Rest easy my friend, @bigshiz.

LaShawn Daniels is a legend. Thank you for creating some of the most powerful songs ever. Rest in Heaven KING.

Yooooo I’m lost. Lashawn Daniels died?!!!! I’m stuck. This man took my vocal ability to new levels while working in Dirty Money. One of the funniest people with the best heart. A rare talent and a beautiful soul.

I was at a complete loss for words last night… it’s really crazy how we can just be gone in seconds. Check on a friend or loved one today and everyday. Nothing is promised and we know that but when it’s close to you it hurts and doesn’t get any easier. Rest in heaven @bigshiz this one is really sad… 😔😢😔

💔💔💔💔💔 I can’t even process that you’re gone. I learned everything I know about harmonies and vocal production and songwriting from YOU at day one straight outta sac into your arms and coaching!! All of your timeless work. Purple Reign days are my entire foundation. The classic songs you’ve written. Your kindness and willingness to work with some new girls straight from their hometown and give us your ALL after working with LEGENDS ONLY! I would be nothing. I was just talking about you to billboard and it feels like yesterday that we were all in the studio laughing, crying, working day and night just to get a glimpse of a dream. The way you made me do it over and over and teach me to come and sing with that shiz vibrato that was so recognizably yours. Your patience with my pitchy ass at 19. The way you sang toot it and boot it around the studio echoing in the halls. That loud contagious laugh. I will never forget your presence. I really don’t know what to say this is heart breaking I hope the world knows the angel we just lost. I 😥😥😥 really wish this weren’t true. Life is so short man I pray for your family. Your twin son. I pray that God wraps his arms around everyone tonight as we pray and re imagine you with the wings you’ve always had. I will miss you Shiz. So much. Rest well. Play your music and sing loud in heaven so we can hear it in our dreams. I love you

Wow. That Lashawn Daniels new. One of the greatest songwriters EVER. Literally A SOUND in R&B. Prayers to his family.

Honestly can’t take anymore ……. smh ……. just DAYS AGO why didn’t I just go in the dressing room and make sure I saw you, walk back to the front at the carpet and make sure I saw you big bro , my feet were hurting and said to myself, imma call big bro tomorrow and we’ll get up when I get back to LA of course. I HATE THIS, THIS IS HONESTLY too Much. No Words. I LoVe You April, You are another breed of woman and you and your husband have been beyond family to me in this lifetime. This year is terrible. I’m not putting No Rest In Peace by Your name LaShawn, I’m not doing that. Smh. 💔💔 @bigshiz

#LashawnDaniels rest easy bro, your gift of music has changed the world but most importantly my life, you will forever be one of the Musical 🐐’s on the 🖊 gone but never forgotten!! 🙏🏽🕊 @BIGSHIZ

Damn.. LaShawn Daniels.. wtf, this can’t be real. This HURTS. He provided so many iconic songs in my life. Rest easy big man.. you will live in forever! pic.twitter.com/lgTOn4XWx4

So sad…I was just with him last weekend 😥😥😥RT @trapcry: Rest In Peace to LaShawn Daniels @BIGSHIZ. He’s responsible for so many great moments in music. 😢🙏🏾. A legend. pic.twitter.com/zrZDZ3h9DL

This pic was just 8 days ago 😢 This was my big brother for real!! Words can’t express how @brefree and I feel right now. Praying for the entire Daniels family!!!

So much love in this pic! MAN!!!! We are so grateful to have had the opportunity to know and love you @bigshiz! Sis @iamaprildaniels we are holding you up in prayer! We love y’all sooooooo much!

Brunchin with my Boo🥰 #CoolCouples

If there was ever a physical representation of “Your gift making room for you,” you were it. @BIGSHIZ , thank you for being a pioneer in every genre and for unashamedly proclaiming your faith. You will be missed 🙏🏾 We are praying 💔 #LaShawnDaniels pic.twitter.com/lU3rCk5vqw