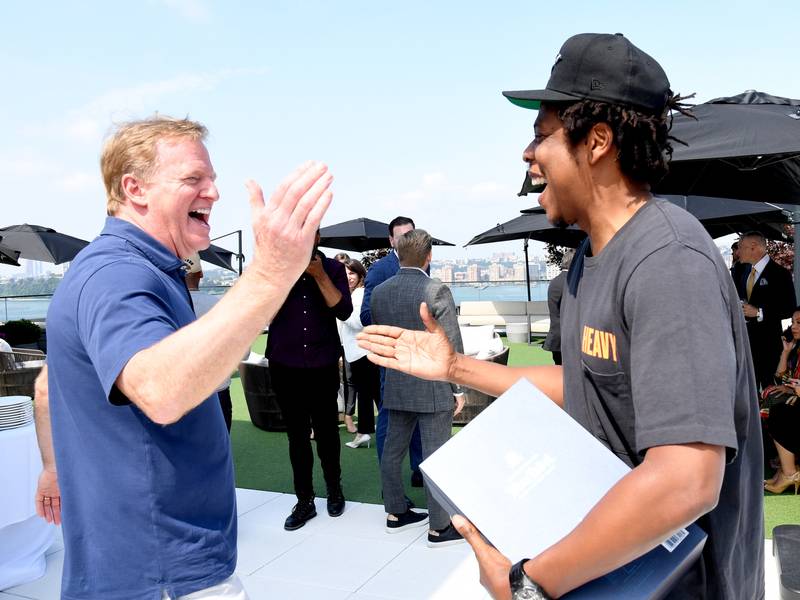 This week in Hip Hop, JAY-Z made headlines by agreeing to a partnership with the NFL. Also, Nicki Minaj started all sorts of drama on Queen Radio and The Joe Budden Podcast. Lastly, NBA YoungBoy was released from jail after serving time for a probation violation.

JAY-Z sparked lots of debate this past week after getting into business with the NFL. Hov announced a deal with the league, which will use Roc Nation as its “live music entertainment strategist” and have JAY contribute to its social justice initiative Inspire Change.

The deal has been met with praise, criticism and some wait-and-see approaches. But the rollout wasn’t smooth at all with Hov coming under fire for the handling of former NFL quarterback Colin Kaepernick, who’s seemingly been blackballed by the league for starting the national anthem kneeling protest.

JAY claimed he spoke with Kaepernick prior to announcing the deal. However, Kap’s camp — including his girlfriend and attorney — said no such conversation took place.

Since the partnership was announced, a report has surfaced claiming JAY is going to become the co-owner of an NFL team.

Read more about JAY and the NFL here.

Nicki Minaj played instigator by speaking her mind on Queen Radio and The Joe Budden Podcast. The Black Barbie took aim at Budden for allegedly lying about her and more, but the rapper-turned-podcaster was far from her only target.

Rick Ross also felt the fury of Nicki’s wrath, getting chastised for dissing her on “Apple Of My Eye.” Rozay didn’t seem too offended though, playing it off during an appearance on The Breakfast Club.

Speaking of the Breakfast Club, Charlamagne Tha God was another person who landed in Nicki’s crosshairs. Although he denied starting the “hate train” for Nicki, she zeroed in on the radio host and claimed she was banned from his popular show.

NBA YoungBoy Gets Out Of Jail

Just a reminder . #nbayoungboy is FREE. We waiting for #kodakblack now

YoungBoy Never Broke Again a.k.a. NBA YoungBoy is no longer behind bars after serving about 90 days in jail for a probation violation. The controversial rapper stepped out of incarceration sporting a new look too.

The mustachioed artist showed off his facial hair in a brief clip uploaded on social media. While he’s out of jail, YoungBoy will remain on house arrest for the next 14 months.

Big K.R.I.T. Explains How Stepping Back From Production Allowed Him To Have Fun On K.R.I.T. Iz Here

HipHopDX caught up with Big K.R.I.T. to discuss his new album K.R.I.T. Iz Here, what it was like working with Bun B and more. During the conversation, Krizzle talked about how much fun he had making his latest LP.

“It’s amazing to finally be able to have fun, just doing what I love to do,” he told DX. “It kind of reminded me of being in my grandmother’s house and I was just whipping up a beat; I got a sample and I’m just jamming it all day long. It didn’t matter whether anybody heard or not, but I knew what it was. I feel like this album in itself is me just having fun.

De La Soul member Maseo recently chatted with DX about his group’s dealings with Tommy Boy Records. While reflecting on his situation, the veteran artist recalled an infamous moment involving the label and Naughty By Nature MC Treach.

“Once upon a time, Treach did go up to the offices and let out a bunch of rats and snakes,” Maseo noted. “This was the mid-90s when Tommy Boy was still on 86th Street. Treach went in the office and let out rats and snakes all throughout the office. They had to shut down. That’s what also led to them moving downtown. That is also the reason why most record companies have security up there.”

Read what else Maseo had to say here.

West Coast pioneer Yo-Yo spoke to DX about her participation in the Love & Hip Hop franchise. Although the reality series is known for its wild antics, she made it clear she has no problem being associated with it.

“It’s who I am,” she stated. “I’m always in the middle of some nonsense. I work with the youth. I’m teaching kids literacy and I work with the Intelligent Black Women’s Coalition. Parents call me when their 13 or 14-year-old daughters are messing up. I’m in school with the kids when they’re calling people ‘bitches’ and spitting on their parents. It’s no different for me.”

Check out the full Q&A with Yo-Yo here.

Obie Trice Returns With “92” Single & Weighs In On Eminem Vs. MGK Beef

Longtime Eminem collaborator Obie Trice has re-entered the Hip Hop landscape and talked to DX about why he’s back. In addition to touching on Shady’s beef with Machine Gun Kelly, Obie reflected on how different things are for him now in the music industry.

“All the hype is gone for me, you know? That’s the thing — we’ve been there, done that,” he explained. “I feel like I had an album done and I wanted to release it. I want to get back out here and see what the world think about it. That’s it.”

Read the rest of the article here.