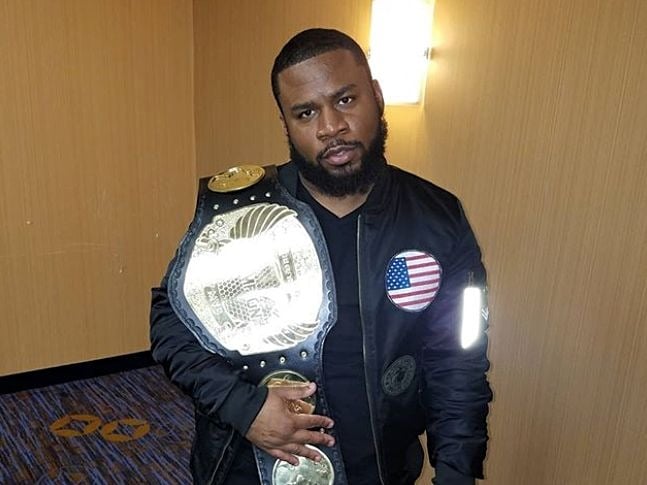 Philadelphia battle rapper Tech 9 has passed away. Fellow Philly rapper Buttah From The Block confirmed the news via Facebook on Sunday (March 24).

“Aw man it hurts me to be saying this right now and after speaking to your dad this even harder to process,” he wrote. “Philadelphia and the battle rap culture all took a loss with this one. He was a pioneer, gentleman, great father, entrepreneur, enthusiast and philanthropist.

“With deep hurt and sorrow I say we will miss u and love u bro. Tell Spittage We gon hold it down bro. S.P.I.T.T.A.G.E. YALL MVFKAS BETTER GET IT RIGHT WAYNE A.V…REST IN PEACE TO MY BROTHER #TECH9 @therealtech9.”

Born Akeem Mickens, Tech 9 — not to be confused with Strange Music’s Tech N9ne — was a highly regarded icon in the battle rap world. For over a decade, he competed in dozens of battles, quickly establishing himself as a powerful force on the mic.

As of publication time, Tech 9’s cause of death hasn’t been revealed.

Several of his peers shared their grief on social media. From Kendrick Lamar and Tech N9ne to Lupe Fiasco and Lloyd Banks, there was no shortage of condolences pouring out for the late MC.

THEY SAY MY FACE DONT LOOK THE SAME WITH THE STOCK-

Condolences to the family of the late great Tech9 of philly. Rest well.

Rip Tech 9…one of the most entertaining battle rappers.

Condolences to his family and friends.

May God have mercy on his soul.

Respect to Tech 9, his family, and Philly. Rest easy Champion

Crazy, i just talked to him on Twitter he told me he’s been watching me, hurts to hear this about a legend ? rip tech 9
Long Live the Legend
Rip @Therealtech9 ? pic.twitter.com/oDvGT3KML3

RIP Tech 9, a Philadelphia Battle Rap staple. We weren't always on good terms but he reached out to me after Trice passed & thankfully we were able to put that all aside. Despite my line u always were a REAL Tech 9 & your OWN Tech 9. My condolences to his family, friends & fans.

From the whole KOTD family,

Our prayers and deepest condolences go out to Tech 9’s family and friends.

He was a pioneer, a legend & a true champion #RIPTECH9 ?❤️

Yo my heart so heavy we really lost a philly legend today !!! TECH 9, I love you god! #battlerap ???

RIP to Tech 9 from Philly…1st cat who really made me pay attention to the new cats coming up battle rapping. He was so ill. Insane wit the presence and bars. Man I loved watching that dude. Wish I met him so I cdve told him how much I loved his work. Smh

WE GREW UP IN A SLIM ASS APARTMENT SO ME AND MY BROS USED TO WATCH THIS PART A THOUSAND TIMES AND LOL RIP TECH 9 FROM PHILLY!! THANK YOU! CONDOLENCES ?? pic.twitter.com/MRoUhSKIFi

Rest In Peace to the Philadelphia legend Tech 9

Rest Easy to A Philadelphia legend Tech 9 ?? love & respect to his family and friends. As a fan of the battle rap culture this is a major loss.