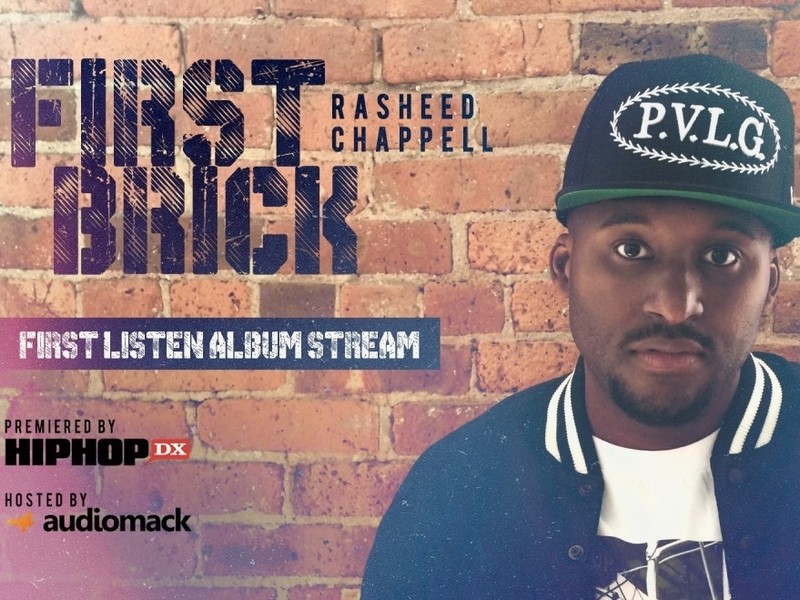 There was once a time when taking years between albums was commonplace. But in today’s crowded Hip Hop landscape, it’s easy for artists to get lost in the shuffle during such a long absence — especially when that timeframe is seven years.

New Jersey’s Rasheed Chappell looks to recapture the attention of past listeners and gain some new ones with First Brick, his sophomore album produced entirely by Kenny Dope. The talented MC has teamed with HipHopDX to bring fans an early listen of the LP before it officially drops on Friday (September 14).

“For those familiar with my first release, Future Before Nostalgia, they will be happy to see that I’ve remained true to form as it pertains to beats and rhymes,” Chappell tells DX. “They will however witness my growth as an artist, lyricist, storyteller and overall MC on this project. To those hearing me for the first time, they will get a glimpse into the world from which I draw my slang, ideologies and influences. I think it provides a balance that reflects my past and projects my future all in the right now.”

Chappell knows he’s dealing with a case of “out of sight, out of mind” but intends for First Brick to be the beginning of more frequent releases. That said, he’s still focused on creating timeless works of art as opposed to dropping music for the sake of awareness.

“Every word I pen is written to stand the test of time,” he explains. “I don’t believe in disposable music. My job is to carefully scribe a legacy. My words will live long after I’m gone, and I hope those that hear them get a sense of the man and the times. I do know that good music stands the test of time. Case in point, it’s been seven years since I dropped an album, and I’ve been blessed to remain on the minds and in rotation of many the world over. That being said, I will never be away that long again. First Brick is the launching point for much more music on the way.”