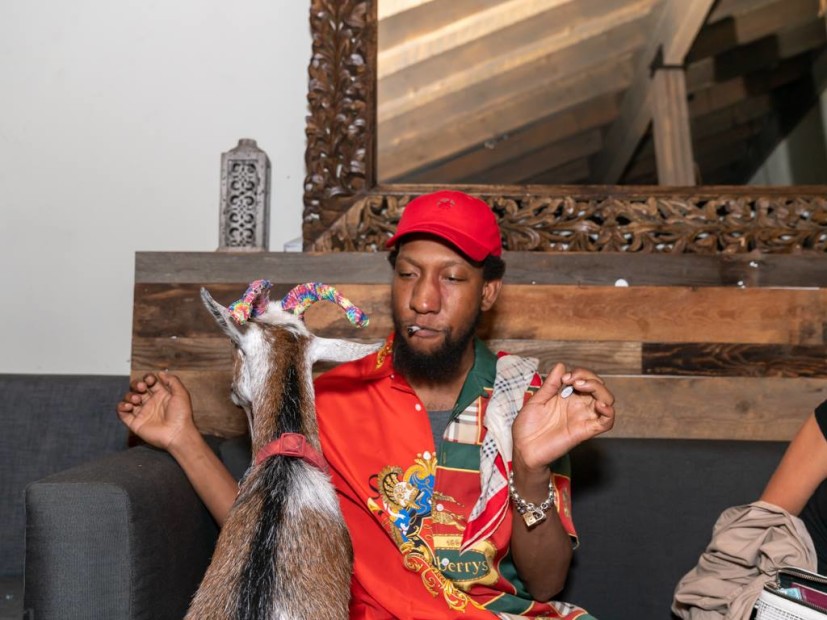 Once inside, visitors had the opportunity to pet the goats firsthand, and take photos while cuddling the animals in their arms. Onlookers seeking a little calm in the midst of the storm were quick to strike a few yoga poses, while the goats would join in on the serenity by climbing onto the outstretched bodies. Things got a little crazy once the drinks started flowing in abundance, but fortunately, no goats were harmed in the making of these shenanigans.

The listening party itself took place at the outdoor plaza in the middle of Le Jardin, with DJ Blondie Beach spinning current hits as well as all the new cuts from Left Brain’s album. Guests alternated between showing their moves on the dance floor and lounging on the comfortable couches scattered about, on a warm evening with perfect weather for the occasion.

The atmosphere was light and enjoyable throughout the venue, with each bar serving up customized cocktails such as the “Mind Gone” and the “Left Brain” to honor the man of the evening. Special guests were also on hand to see all the action go down, such as fellow Odd Future member Mike G.

From a precursory listen, Mind Gone, Vol. 2: Gone, Never Forgotten sounded decent. It’s a collection of hard-hitting trap bangers that kept the energy high. Left Brain spent much of his time near the turntables, while also flowing through the lounge to take in as much of the scene as possible. Flashing his pearly whites at every turn, his joy at how the album and evening turned out was evident.

The album comes just over a year after Left Brain released Mind Gone, Vol. 1 to solid reviews. Just like the original mixtape, the sequel features a bevy of guest appearances, from artists such as Jay Worthy, Smoke DZA, and longtime MellowHype collaborator Hodgy. Left Brain handles much of the production himself, serving as executive producer along with fellow L.A.-based artist L-Dog.

All photos taken by Tyler Sawyer.