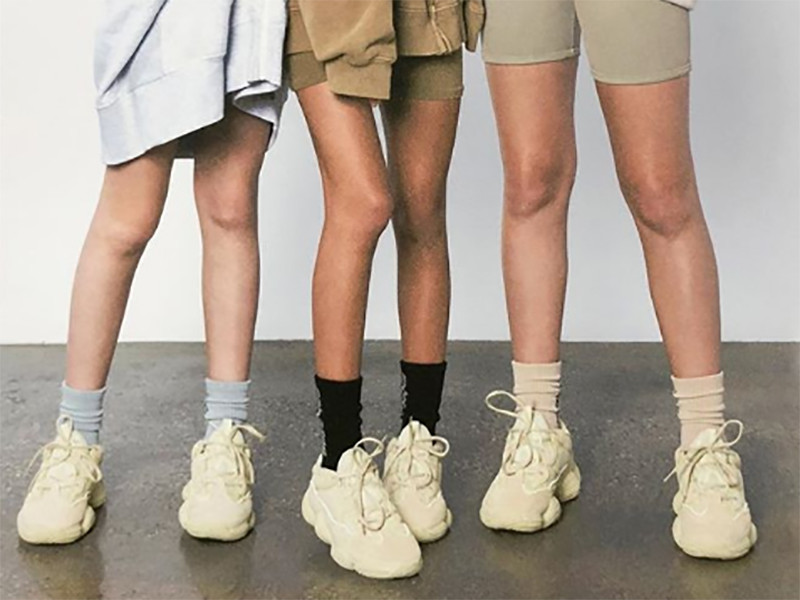 If the photographs to advertise the Yeezy SUPERMOON Yellows looked familiar, it’s because they were — at least according to Instagram account Diet Prada, which illustrates how people in fashion are regularly “knocking each other off.”

Another day, another Kanye rip. The just released Yeezy Season 6 campaign lensed by @elirusselllinnetz bears a striking similarity to this 2015 series by @thingspowerthemselves . It’s pretty messed up when you consider the original work by Rita Minissi explores identity and was inspired by dealing with personal trauma and a resulting desire to reconnect with her own body. Will Kanye own up to it this time, or will he be blaming others like he did with the Tony Spackman sketch not so long ago? Lol • #yeezy #kanye #kanyewest #ritaminissi #art #photography #model #pose #neutrals #sneakers #hypebeast #hypebae #snobshots #athleisure #leggings #bikeshorts #sweats #sweatshirt #wiwt #ootd #dietprada

We’ll note that in the Diet Prada posting, they threw shade at West about the so-called “Tony Spackman sketch.”

They’re referring, of course, to a sketch that West posted to his Twitter account back in April that claimed to be “where a YEEZY study for a base level starts.”

???
this is where a YEEZY study for base layer starts. I'm so excited about our new design team. Yeezy is no longer a fashion company we should be referred to as apparel or clothing or simply YEEZY. pic.twitter.com/0hcy4yHvO2

He then later tweeted credit to Tony Spackman, while claiming that the “designer” who stole Spackman’s work was fired from the Yeezy team.

Today I learned that a newly hired designer on the Yeezy team presented work that was not of their own. This person has immediately been let go from the Yeezy brand.

In a moment of inspiration, energy and excitement I had posted this sketch and would like to acknowledge the true creator of this amazing work, Tony Spackman.

However, West hasn’t been shy about endorsing plagiarism in the past.

too much emphasis is put on originality. Feel free to take ideas and update them at your will all great artist take and update.

Cars have four wheels. Hoodies have hoods. It's amusing to me when some one says this is an original hoodie. Bro… it's a hoodie ?‍♂️

I find myself getting stuck in the idea of originality and letting my ego push me to say things like "this person stole this from me" and the funny thing is it'll be a reference I took from somewhere ?