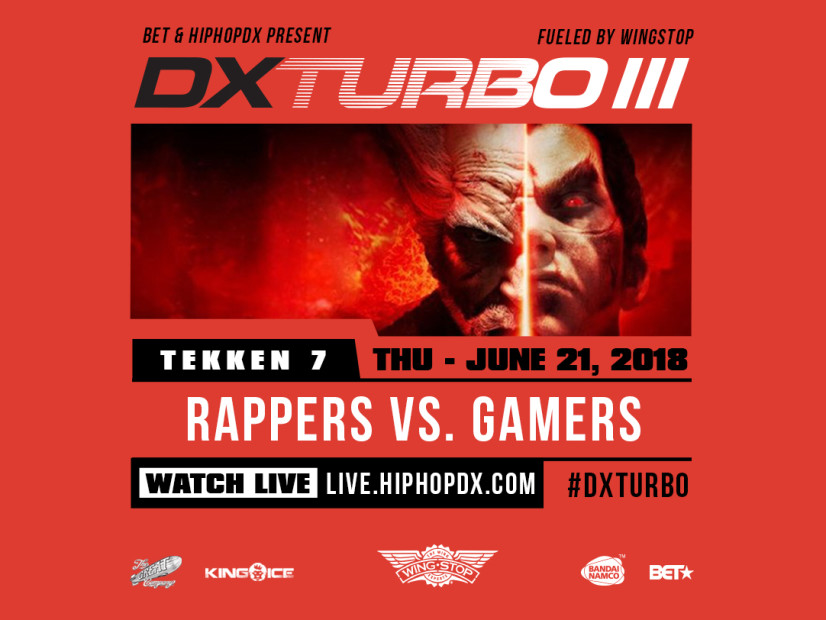 Los Angeles, CA – For the third straight year, HipHopDX is engaging in our popular video game tournament, DX TURBO III, which is an incredible mix of rappers, Hip Hop influencers and gamers to make for an incredible time.

This year’s contest is sponsored by BET, the nation’s leading provider of quality entertainment, music and news television programming for the African-American audience, and Wing Stop, a worldwide franchise who remain on the cutting edge of digital ordering technology. The title of choice? Bandai Namco’s Tekken 7.

“It’s spectacular! This event is now in its third year and HipHopDX is very excited to again present such an authentic and original event with the support of BET, Wingstop and Bandai Namco,” said Sharath Cherian, Founder/CEO of HipHopDX. “We’re honored to have these companies support the gaming and Hip Hop world as they collide in such a fun way.”

In 2017, Kirko Bangz and iPod King Carter slid away with the crown, literally “dunking it out” on NBA Playgrounds in front of a who’s who list of champion gamers like Mike “Suiken” Khieu, Anthony “Jackie Tran” Tran, Vanessa “Swag Master” Tan and Joseph “Joey Fury” Bennett (who recently took out the #1 ranked Kim “JDCR” Hyun Jin in Tekken at Combo Breaker 2018).

For 2018, Page Kennedy, Derek Minor, Mozzy, and Grammy-Award winning producer Drumma Boy — all of whom are anxious to prove they are also up to the challenge, DX TURBO III is sure to be the best tournament yet with more players to be announced in the coming days.

DX TURBO III’s music will be provided by DJ Hed of Real 92.3 and hosted live by TBS eLeague host Steve “Tasty Steve” Scott and HipHopDX’s The Breakdown host Murs Carter. The double-elimination tournament will consist of eight teams of two players (one gamer, one rapper) who will battle until one team is left standing.

Before it went on to close out 2017 selling three million copies worldwide, Tekken 7 took Japan by storm through a limited arcade release in 2015, which was the first title to utilize the Unreal Engine. Developed by Bandai Namco Studios, an updated version, Tekken 7: Fated Retribution, ​was released in Japan in 2016 and featured new stages, costumes, items and characters. That version was released for Microsoft Windows, PlayStation 4 and Xbox One in 2017. ​

The festivities kick off on Thursday, June 21, 2018 at 5 pm EST/2 Pm PST and will be broadcast live via HipHopDX’s Twitch channel, as well as on BET’s YouTube & Facebook.