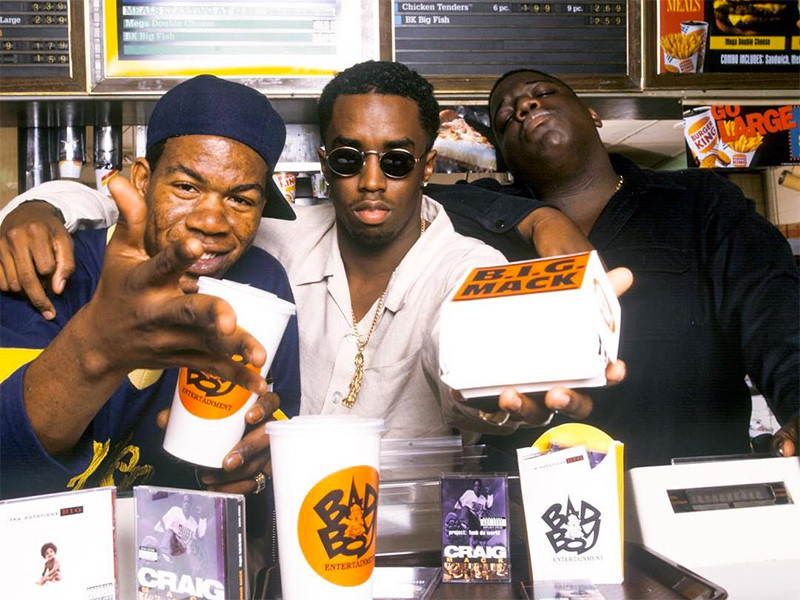 New York City-based photographer Chi Modu has been an integral part of many rap artists’ marketing campaigns over the past 30 years. He has countless iconic photos of legendary rappers such as Tupac Shakur, Snoop Dogg, Mobb Deep, and The Notorious B.I.G. on his resume.

To commemorate the life of Craig Mack, who passed away on Monday (March 12), Modu posted one of his memorable shots of Bad Boy Records’ first two signed artists — Mack and B.I.G. — as well as the label’s founder/CEO Sean “Diddy” Combs on his Instagram. The photo was from the “B.I.G. Mack” advertising campaign that helped launch the label in 1994.

The imagery within the frame consists of an obvious play off the artists’ stage names and references Mack’s Grammy-nominated single “Flava In Ya Ear” (and its remix that became a vehicle for Biggie’s stardom), which launched Bad Boy’s tour de force in rap through the 90s. The photo is inside a makeshift McDonalds with “B.I.G. Mack” burger containers and cups using Bad Boy’s insignia, along with CDs and menus of their debut albums, Ready To Die and Project: Funk da World.

As marketing strategies for artists continue to evolve, industry professionals have become more creative with merchandise and products (i.e. “Rap Snacks”) to brand the artists beyond EPKs and music placement on blogs, radio, TV commercials and social media.

Modu spoke to HipHopDX about how Bad Boy’s earliest marketing strategy was an ingenious way to promote Mack, B.I.G. and Diddy’s images, and how the photo concept remains highly influential for marketing artists even decades later.

Chi Modu: “Flava In Ya Ear” is one of the best freestyle beats ever. It’s something that everybody still rides to that beat. Everybody.

It stands the test of time almost 25 years later and is one of my personal favorites as well. With your 30-year tenure in the rap industry, how does it make you feel seeing so many legends, including ones you’ve worked with, pass away?

Well, I’m getting used to it. But every single time I wake up and I see somebody post somewhere like uh oh. And I think the whole internet sort of looks to see which clip that I’m going to put up to commemorate it. So, it’s almost like a bit of responsibility that I feel to sort of let folks who might not know already, but do it in a respectful way and still about Hip Hop. Not just about mourning but back to the brighter times. That’s why I put that photo up on my Instagram account of the [Biggie and Craig Mack] shoot.

That “B.I.G. Mack” shot was pivotal for a lot of marketing strategies for rappers from that early-to-mid ’90s era. You’ve worked with so many legendary hardcore rap artists, including Biggie on separate photo shoots. How did you balance that B.I.G. Mack shoot to be creative, funny, but not too campy for the campaign’s lead image?

I think at that point campy was actually okay because, in some ways, that’s Hip Hop. You were appropriating, you know? And the same way we did it with music as well. We take a jazz beat and then rhyme over it. So, I really don’t think it’s all that different from what the genre was about. It’s like we’re going to take what we are and take what you are and meld the two together, which is kind of what we did with that B.I.G. Mack-Craig Mack thing.

I mean, they came to me with a concept. I think [it was] Lou Romain, who was at Arista [Records] at the time in their P.R. department when Bad Boy [Records] was bubbling up. I knew Lou from The Source days, so I think Lou and Puff probably had the concept together with the creative team. There was a Burger King that was nearby the office in Times Square, which was how we could get into Burger King. So, we just did basic Photoshop, right? Early Photoshop and tried to make Burger King look like a McDonalds.

It’s funny because you actually see the Burger King logo in the backdrop of the photo.

[Laughs] It’s still visible as to get it Photoshop style. And that B.I.G. Mack box was a big deal. The concept became a much bigger deal when B.I.G. died. It was cool. It worked but was kind of whimsical. The picture wasn’t as important as it’s become today and even more so today now that Craig just passed. It’s wild how things take on a whole new shape in life as people leave us.

What was distinctively different about that B.I.G. Mack campaign compared to others that you’ve worked in?

I think in some ways that campaign was a little bit of a leading edge because it wasn’t really about a particular album release or a song. It was a campaign for a kick-off for a label, which we hadn’t really seen prior to that. That was the announcement for Bad Boy. To me, that was unique in a way. And with Puffy putting himself in the photograph as well because he represented the label.

It was kind of the start of the label owner being part of the brand because prior to that, those guys tended to stay out of the picture. You knew about Berry Gordy, but you really didn’t see him in the ads, right?  It was always artist-first. So, that was the beginning of the label owner being in the shoot. I think Jermaine Dupri was doing a little bit of that as well around Kris Kross and them [for SoSo Def Records]. Puffy took it to a different level, hence, his career that followed.

Puffy rapped a verse on Supercat’s “Dolly My Baby (Remix)” in 1993 with Biggie, which helped kickstart Bad Boy before Craig Mack came along the following year. Did you notice Puff trying to be an artist himself at the time of the B.I.G. Mack shoot?

History answers that question for you based on what you’ve seen since. And yes, history says that yes he wanted to be an artist, but it just took a while for it to happen. [Laughs] With Craig and B.I.G. on your label, it’s a lot tougher for you to come out as an artist. But some of them left us, and time went on, it became a lot more viable for Puff to become a rapper. Hence, the album that he released right when B.I.G. died. Would that album have the same legs if ‘Pac and B.I.G. were still alive? Probably not. But a lot of those things are a matter of timing. And so, the timing was there, the opening was there.

I would say that he probably did want to be an artist, or at least a certain amount of fame the whole way. That’s certainly how you get to those heights. You have to be pursuing it. That’s not by accident. You can’t do it without notice. You have to make it happen.

Did you notice any other labels’ artist marketing strategies that were extensions of that 1994 B.I.G. Mack campaign in the form of magazine advertising, online promotions or physical packaging?

That was really the beginning of the whole street team vibe. It’s funny because street teams feel like old hat now, but they were fairly new back then. At that time, you started to see the block covered in flyers of upcoming artists all over the ground. That’s what street team guys were doing. Bad Boy was definitely on the front edge of using street teams to push their brand. I’d say that. That campaign was an extension of their street team mentality. They had the Bad Boy promo item.

I remember at [former Hip Hop industry convention] Jack The Rapper, they had Bad Boy picket signs and were walking around. They really brought that marketing into the music space aggressively. I will give Puffy that credit for sure. No one was really going there with it. And Puffy’s doing his birthday at [luxury restaurant] Cipriani’s, inviting Martha Stewart, Donald Trump. He was playing in that space. And some could argue that it was good, some could argue it was bad for us. But whatever it is, it’s courage. Marketing is important, but I find that too much marketing dilutes the product.

Do you believe there to be more dilution in today’s social media era in the marketing of rap albums and artists?

If your work is quality and can withstand the test of time, you need a little bit less of the hype marketing to make things move. You see a lot more focus on branding and marketing because it’s tough to separate yourself from the pile these days. If you look at it visually, I’m not Joe Marketer myself, but I do let my work speak loudly. Since I took that approach, I have a long-term strategy, but in the short-term, the aggressive marketers will seem to be doing more than me because they are louder in the short-term. But in the long-term, the people who have the stronger stuff will always rise to the top. Aggressive marketing will always give you a step up, but it’s not really sustainable. There is no quick fix to sustaining. It’s a longer play.

What artist(s) from today’s era fits into that long-term approach that is reaping the benefits now?

I’d give Kendrick [Lamar] some credit because his marketing stays true to his brand. He’s out there, but he’s not diluted of overexposing himself too much. In a way, he’s on Instagram, but he’s not all over Instagram. I think he has the right long-term strategy. He kind of needs to show a little bit more behind the scenes in his world without showing everything, but I think he has a strategy that can stay a little bit longer. He’s not so gimmicky. It’s not about a current hair color he’s wearing, gold fronts or jewelry. It’s just the person and then the lyrics. That tends to last the longest, even though in the short-term some of the hype will pass you. I’ve lived the life and have been doing this for 30 years. You’ll always maintain if you stay true to yourself. You may not make as much money in the longer play, but you’ll make way more money and achieve higher status doing it over the long haul.