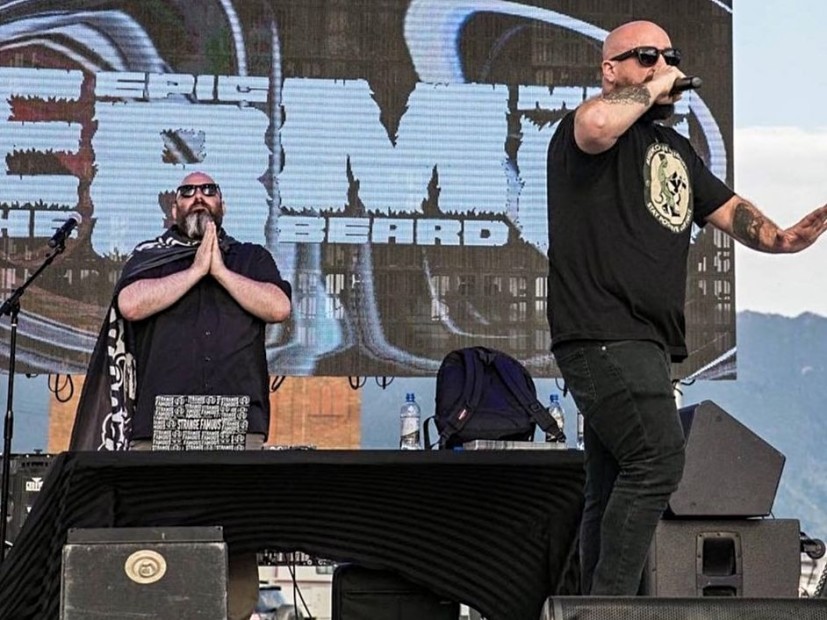 The Rhode Island-based duo announced the EBM project last December with “War On Christmas,” which — in true EBM form — took jabs at Donald Trump, Mariah Carey and other pop culture staples. To celebrate the occasion, the bearded rappers have come up with a custom video game to accompany the release of “Five Hearts.”

“Sage originated this concept and told me about it when we first started working on Epic Beard Men material two years ago,” Dolan tells HipHopDX. “My contribution to this song started as an attempt to answer the questions Francis was asking in his verse about, ‘How the hell do I replenish my health meter, this far into the quest?’

“From there, I started thinking about how much time I spent playing video games as a kid and how those games prepared me mentally for life. Our parents were so sure those games would rot our minds, when in fact I think they were doing the opposite. They turned us into problem solving machines with mutant hand-eye capabilities. They taught mental discipline, trial and error, the feeling of achievement, while telling dope stories and challenging your physical skill.”

Designed by Michael Miriti with art by Wayne Peters, the Five Hearts video game is web friendly but can also be played on consoles with controllers in one or two player mode.

“You can play as either of us or both at the same time, and feel the satisfaction of going full ‘Streets of Rage’ on SoundCloud rappers, sample-sniffing copybots, and Tiki-Torch Nazis,” Dolan says. “I’ve been beta testing this with my 4-year-old nephew for the past month and he strongly approves. He also says it needs more levels. I told him, ‘It’s got levels kid.'”

The “Five Hearts” single pairs up perfectly with the video game’s concept. Produced by Le Parasite and crafted by engineer Adam Schneider, the song led to the video game idea. After six months and “10,000 emails,” they pulled it off.

“I’m not up on all the new video games, but the original Nintendo Entertainment System owned a bulk of my childhood and it’s still the only system I use,” Uncle Sage tells DX. “The whole ‘Five Hearts’ thing is in relation to Zelda and how Link has five hearts to represent his life force. Every time he takes a hit, a portion of a heart is removed. But there’s the magical lake that will replenish all of his hearts if you can find it.

“I often think about that when I’m feeling run down by tour or just the everyday grind. And then you start fantasizing about retiring on a lake or what you’re going to have to do in order get the five hearts back.”

Epic Beard Men’s Season 1 is expected to arrive on March 2.

Check out the cover art below and play the video game here.