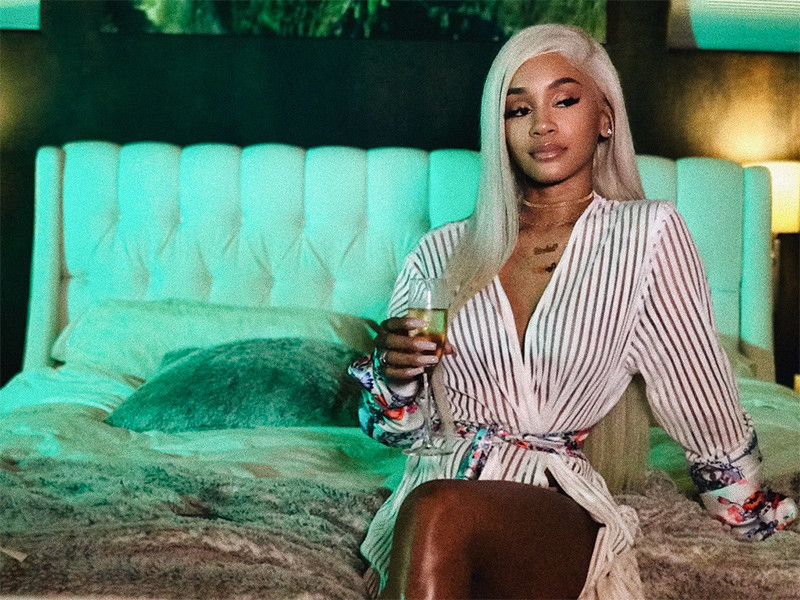 For as many rappers as the Bay Area has produced, Kamaiyah is one of the few women to break through in the scene’s rich history. Hayward native Saweetie wants to become the next female MC to break the trend and put on for women in NorCal.

“I’m a Bay girl. The Bay raised me,” Saweetie said when asked about her history of living across California. “I love Sacramento too, so I kind of have two hometowns: Hayward and Sacramento. Those two cities shaped me into who I am today. I’m definitely a Cali girl but more like Bay Area.”

Becoming an MC has always been the end game for Saweetie, and she’s worked tirelessly to achieve her goal.

“I’ve been wanting to do this since I was 14 years old, so it [has] always been a dream,” she told HipHopDX. “I went to college for five years so it got kind of put on hold, but since then I’ve been working toward [becoming a rapper]. Have you guys ever seen that triangle where it goes: social life, school, and job or sleep? [It] was like choose two. Nah, I chose all three. I was literally going to the club [then] going to my 8 a.m. classes. I was working two jobs; I was a waitress and I had a work-study job at the business school. I did it all. I loved being busy but when people heard about it or heard what I was doing they were like, ‘Yo you’re crazy.’ When it’s you, since you’re so into it and you’re doing it step by step and looking at it from the big picture, it’s definitely possible.”

So far, social media and mixtapes have helped forge Saweetie’s name and identity in the rap game. But now, she’s moving forward with her debut EP.

“[My name] actually came from MySpace,” she noted. “Everybody had a little nickname on MySpace. My MySpace was poppin’. It kind of stuck with me. People at my middle school started calling me [by] it. It kind of solidified my sophomore year of high school [when] my step-mom got me a Saweetie chain.

“I listened to Nicki [Minaj] and [Lil] Wayne a lot, and J. Cole, and they was always on someone’s hot beat and I wanted to compete with that. Like, if I could make someone’s hot track my track, I feel like I’ve accomplished something. Which I did with ‘My Neck, My Back,’ ‘High Maintenance.’ I did a couple of other covers and I feel like that’s my way of expressing myself. However, I’m working on my EP right now. I’m transitioning from mixtape Saweetie into original artist tackling original content [and] beats Saweetie. I’m working with Zaytoven and AG right now.”

The same social media channels that would jumpstart her career are also the cause of her fame and unfamiliar attention.

“I’m a consumer. I’m a fan first. I’m a regular person,” she said. “‘ICY GRL’ didn’t happen overnight but I am getting a lot of attention I’m not used to getting but before I was a regular person. I like talking to my mom. I like talking to my best friends. They kinda bring me back down to Earth. It’s crazy how the internet can make somebody so popular. It can get overwhelming sometimes. I like to talk to my mom. I also like to listen to Gospel music.”

While Saweetie’s popular track “ICY GRL” is blowing up the internet, not everyone has been thrilled about it.

“There was a post but she don’t know me like that,” Saweetie quips when asked about Khia’s reaction to the song borrowing the beat from “My Neck, My Back.” “It was like a little shade here and there but she don’t know me so I don’t take it personally. It’s the game. It’s entertainment so I took it with a grain of salt. I still love ‘My Neck, My Back.’ It is what it is.”

Aside from Khia, she has also drawn inspiration from some of the most prominent women in Hip Hop.

“My inspiration comes from everywhere but I love [Lil] Kim and Foxy [Brown],” she said. “They’re the OGs. I love Foxy, her voice. She made me comfortable with my voice. I loved Nicki growing up and I would try to like emulate her sometimes but I don’t sound good doing all that extra stuff. She owns that. When I heard Foxy, I was like comfortable with my deeper voice. So I would definitely have to say Kim and Foxy and Nicki. I love Cardi [B]. She’s fairly new. I like her voice too. It’s on the deeper side. It makes me [say], ‘Ok, deeper voices can sound good on a track.’ There are not too many females with deeper voices. It’s [typically] like hyper, high energy which is cool too but that doesn’t work for me.”

Saweetie also took the time to address the stigma of women in rap being sex symbols as well as their duty as role models.

“When I show skin it’s gonna make sense,” she explained. “I don’t just show skin to show skin. It’s ok when other female rappers do it, however, that’s just not my demeanor. If you look at my Instagram, I don’t come off that way. I wasn’t raised that way and that’s cool. Sometimes I’m sexy and I’ll put on a bikini. The boobs might be out a little here and there but I don’t ever do it when it don’t make sense. I feel like we should always represent ourselves as the truest and most authentic way possible. I don’t have no problem doing that, it just has to make sense.

“By default, when you’re in the spotlight, you’re automatically put in the role model position. But I like to think of it as, I’m a lesson. You either learn from what I’m doing, you either take it or if it’s a bad thing you’re like, ‘Ok I’m not gonna do that.’ You can take what you can get and you learn from it and whoever’s watching me can take whatever lesson I’m portraying that day and learn from it, make sure they don’t make the same mistakes I’ve made.”

Be on the lookout for Saweetie’s debut EP. For more exclusive interviews like this, be sure to tune into #DXLive every Thursday.