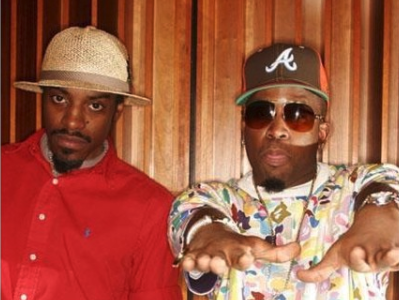 André 3000 sat down for an exclusive interview with GQ Style to discuss a number of intriguing topics, including his current foray into the world of fashion and design. However, one of the more interesting nuggets for Hip Hop heads came when 3 Stacks outlined why he’s always believed that fellow Outkast artist Big Boi is a better rapper than he is.

“Big Boi is smart as fuck,” he said. “We went to the same high school. I dropped out in 11th grade. Big Boi graduated with honors. When you watch early Outkast videos, Big Boi’s the leader. He always had the confidence, where I was kind of like the shy one. Big Boi can rap better than me — I always said that. If somebody said, ‘Pick who you want from Outkast to go to battle with you,’ it wouldn’t be me. ’Cause like, what I’ma do? Say some mind shit? You can’t have thoughts in a battle — nobody gives a shit about that.”

Elsewhere in the conversation, André 3000 was asked whether he’s currently working on new music. While he openly admits his dislike for going to the studio, he did reveal that his enthusiasm for other artists has gotten him back inside the workshop, albeit behind the boards rather than in the booth.

“Actually, I hate going to the studio,” he said. “So what’s got me going once again is me being excited about other artists. I’ve been working on producing a few artists. A couple projects. But here’s the crazy thing: I don’t have the pulse anymore. Rhythms change every generation. The intensity and the drums change. And I’m not on the pulse. I can’t pretend. It’s kinda like watching your uncle dance. So the only thing I can do is this kind of novelty, off thing for them.”

Although his long-awaited debut solo album has yet to see the light of day, André 3000 did reveal that he has hours and hours of unreleased music on personal hard drives.

“When I pass away, people will find hours and hours of files,” 3 Stacks said. “Yeah, hard drives and shit. It’s hard drives of me just in the house alone playing horrible guitar. Me playing piano. Me playing a little sax. I was trying to find out: What can I be excited about? Because I never was, to me, a great producer or a great writer or a great rapper. I always felt that I was less than everybody else, so I fought harder. My only gauge to know when something was good was how I felt it. Like, ‘Oh, man, this is dope.’ Or, ‘This is new.’ So I got to a place where nothing excited me. I kept trying and pushing and pushing. I got to a place where I was just kinda in a loop.”

Lastly, André 3000 compared his own career to that of undefeated boxing champion Floyd Mayweather Jr.

“It’s Mayweather,” he said. “He knows. He’s like, ‘Yeah, I can fight maybe three more of ’em.’ But I’m slowing down, and I see these young kids coming up and I was them. And at a certain point, no matter how Mayweather you are, I think it’s classy to be like, ‘You know what? [brushes off hands] … No, I think I have, like, maybe two more Mayweather fights … Or maybe one.”

To read the full interview, where 3 Stacks also discusses the passing of both his parents, visit GQ Style.