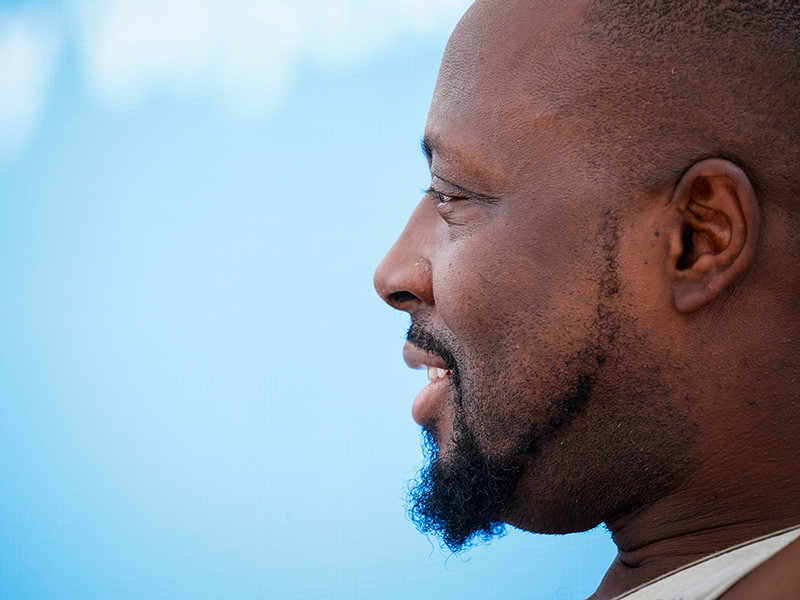 DXHQ – In the 21 years since the release of The Fugees’ The Score, Wyclef Jean’s star has only grown. From writing some of the biggest hits in contemporary music history to carving out his own lane with solo projects, Wyclef’s body of work is legendary.

The versatile musician recently stopped by DXHQ ahead of the September 15 release of his Carnival III album to politic with the #DXLive crew about some of his biggest hits in between putting on a live concert for the staff and viewers.

“Coming in the game as a Fugee, after The Score [and] Carnival, my strength really is writing songs,” Wyclef explained. “The first time I knew I had to write my songs in the industry was after “Killing Them Softly” because it just blew off the roof and I’m like, ‘Who’s getting the publishing? Well, you’re not, you didn’t write it.’ We done made someone like $30 million. So I love writing. If you’ve seen the movie Life with Eddie Murphy and Martin Lawrence, that was the first movie I scored.

“I got a call from Clive Davis like, ‘Yo I need you to do this record with Santana.’ Carlos Santana will tell you that the first time I met him I wrote the groove [for ‘Maria, Maria’] on a keyboard. Clive Davis was giving me a call because I think we was just coming off [writing] Whitney Houston’s ‘My Love Is Your Love.’ [He was] like, ‘Yo, Santana needs a joint.’

“Santana is one of the greatest guitar players. So I get to see Santana and the whole record is ‘Maria, Maria.’ The reason I call the record ‘Maria, Maria’ [is because] there was an old play back in the days I used to be obsessed with called West Side Story where it was like two gangs and then the main girl was Maria. That whole love triangle story is two gangs and the only way peace happens is through Maria. So that’s how the whole West Side Story came about and I know Carlos is a bad ass. He’s a rebel. This the kind of stuff he would want to talk about and interpret with his guitar.”

On How DJ Khaled’s  “Wild Thoughts” Came To Be

“So when I got the call from my brother DJ Khaled, we go back to Shottas, so that’s my brother,” Wyclef said. “I commend him. He has grown as a producer in an incredible way so for him to actually take [‘Maria, Maria’], because it was already #1, and make it number #1 again? That’s like somebody’s doing your work and then doing it justice. You ever hear someone try to take your stuff and say, ‘Yo this person just messed up my creation. No, I don’t want to clear that sample.’ So we definitely commend DJ Khaled.”

On The Back Story Behind Shakira’s “Hips Don’t Lie”

“There was a bit of a war when I did ‘Hips Don’t Lie,’” Wyclef revealed. “[The Hip Hop community] was like, ‘Yo man, you stole [from] Peter Gunz & Lord Tariq!’ I was like, ‘Actually that was sampled by an older generation and they came and sampled it for [Déjà Vu].’ We come and sample it for ‘Hips Don’t Lie’ and make it bigger. That’s really a pattern, right? The same way you can say for DJ Khaled and ‘Wild Thoughts.’ So for me, these patterns let me know my position is just a creator of content. Don’t try to adjust for any formation but just do myself and everything else just gonna come in and adapt to it.

“I’ll give you a fact check that you didn’t know. The original version of ‘Hips Don’t Lie’ is called ‘Dance Like This’ and guess who did it two years before Shakira in that movie Havana Nights? Claudette Ortiz was the first person I recorded [it with] and two years later, mixed the record with Shakira. I just think [Ortiz is] brilliant. I remember the group City High was just the two guys and one day in the studio, I just heard her and was like, ‘Who is that singing?’ She was in the back, quiet. I was like, ‘That’s the group!’ That whole movement on putting it together was incredible, but I just think sometimes because we come from The Fugees that we expect the next generation to be able to grasp it but success at a young age is no joke. What happens is you can either make it or break it. City High had enormous [success] in the beginning but it was hard to carry it.”

On The Creative Process Behind The Score

“One of the biggest records on The Score is ‘Ready Or Not’ and there’s a movie called Sleepwalker,” he recalled. “In the Booga Basement, y’all know how y’all get lit now? We used to get zonied. We were zonied. We herbed up in the basement and I was watching this movie Sleepwalker and this sample comes on. I’m already trippy, so I go and I had a VCR and we connected it back to the studio and recorded that. Threw it on the MPC60, chopped it up. Then [Lauryn Hill] walked in and was like, ‘What’s this?’ Then out of nowhere she goes, ‘Ready or not, here I come. You can’t hide.’ And that record is only three things; I call it the cafeteria boom bap because all I did was copy whatever the MPC was doing on my hand, that sample, and then a vocal.

“The Score for us was the come up. Back in the hood, we used to watch a show called Good Times and the whole thing is that you trying to get the come up. The whole thing with The Score was to say, ‘If only I had a chance to get my mama up out of food stamps, what would it look like? If I had a chance to change my community to where people see my red and blue flag, what does that look like?’ So for us, The Score was not music; it was a movement. Fugees is short for refugees because in order for it to last, we knew it had to be bigger than us. The records that we love more as records that when we hear them, we can just identify with them. That’s how we really did The Score and that’s how The Score came to be. So till today, that album stands the way it is maybe because we did it in a basement. We couldn’t afford to go into some big room with a Neve, so my uncle gave us the basement. Me, Jerry [Duplessis], Lauryn and Pras would go to the basement and from the basement is where all of this stuff is created.”

On How The Score Almost Was Shelved

“You sample something [and] you gotta clear it,” Wyclef stated. “We didn’t even know about that back then. Can you imagine if The Score comes out and Enya is like, ‘Move every Fugees record off every Tower Records’ at the time or [from] anywhere? Sony was freaking out. Luckily when Enya heard everything, she was like, ‘This is different’ and she gave us a pass – which she don’t even need to do. She so gangsta, she live in a castle. You can’t get more gangsta than that. But then we learned  composition is important. We learned the art of publishing is very serious. I always tell kids, get your copyrights right.”

“On The Score, there’s a record called ‘The Mask,’ Wyclef recalled. “There’s a lot of jazz influence and actually coming up, even though I was doing Hip Hop, my teacher was like, ‘You’re gonna be a jazz major.’ They put me in jazz and my first music video I ever was an extra in was Eric B & Rakim’s ‘Don’t Sweat The Technique’ [and] I’m playing [the] upright bass. I was barely 17. The way that this happened is I get that call. You watching where the music videos are at [because] you want to be an extra. I love The R, so I’m like, ‘Yo, I gotta find out where Rakim and them at.’ We ain’t even know what the treatment was, I swear to you. I just brought my upright bass on the train – my man brought his other joint. We didn’t have no kinda treatment. This my bass from high school. We walk in, there are big bodyguards at the door. I tell my crew I got this. I walk up and I’m like, ‘Yo we Rakim’s band.’ [Bodyguard says] ‘Ok, get over there.’ Now years later, I turn into Wyclef and one day I’m at the House Of Blues performing and who I see? Rakim. I held on to The R and I was like, ‘You don’t understand.’ I think he probably thought I was a stan at the time because I’ll tell you every Rakim verse in the world. I was like, ‘Yo, my first music video ever, man, is ‘Don’t Sweat The Technique.’ He did not believe me until he got home and he looked at it and it tripped him out. It’s so funny how destiny is. That’s why I tell everybody, you have to have the will, you gotta be persistent because if I went to that door with like any form of doubt, dudes was gon’ be like, ‘Yo you can’t get in here.’”

On Getting Bob Dylan To Appear In “Gone Till November” Video

“There’s a big legend by the name of Bob Dylan,” he said. “In my hood, they call me half hippie-half thug. So Bob Dylan, he’s like equivalent to what we would consider our Biggie or our Nas, lyrically, but in a hippie space. So when I did ‘Gone Till November,’ I wanted him in my music video and they were like, ‘Yo, it’s impossible. He don’t even show up for his son’s video.’ And there I was at LAX and Bob Dylan walks through the door. I was pretty starstruck. Bob Dylan shows up and he comes and sits next to me and he was like, ‘Wyclef Jean, I kinda dig your stuff. You remind me of an old bass player I used to play with.’ It was so crazy that he would only talk to me. The director would come shaking, ‘Mr. Dylan, it’s time for us to shoot,’ and [Dylan] would just look at him and wouldn’t say nothing. Then he would turn to me and say, ‘Don’t this poo butt know this is my 10,000th video?’ That was pretty amazing. But for me, the whole idea with ‘Gone Till November’ is making runs. I have a cousin who died in Baltimore and he ain’t make it back. Now I’m the one that’s gotta go deliver the message to the girlfriend. So that’s the whole idea of ‘Gone Till November’.”

To catch more exclusives interviews like this, be sure to tune into #DXLive every Thursday at 3 p.m. PST on DX’s Facebook and the WAV Media app.