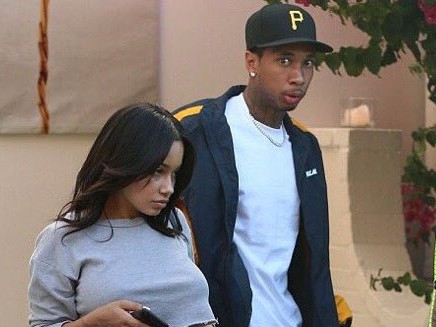 internet – Tyga’s infamous exploits are habitually dragged through the coals of the Internet, and the meme-ready face he made when caught by paparazzi while out with a mystery lady, later identified as 26-year-old model Jordan Ozuna, is no exception.

TMZ published a few awkward photos of Tyga and Jordan leaving West Hollywood restaurant Serafina Sunset on Thursday (April 20) after the pair was spotted having dinner together. The paps caught Tyga looking as if he just got caught with his pants down, while Miss Ozuna appears to be unbothered.

While it’s being reported that Jordan and Kylie Jenner’s former boyfriend are an item, she quickly shot down rumors on Twitter today (April 21) and then laughed about it. Comical right?

This of course doesn’t come without Twitter turning Tyga’s “oh shit” face into a gut-busting joke.

"Hi I'm Tyga… I'm sure you're wondering how I got in this situation… here's my story" pic.twitter.com/iZvqochG0N

RT @RareHipHopFacts: "It was at this moment that Tyga knew…." pic.twitter.com/8jLZDiIcpv

Lmfaooooo tyga cheating on his only source of income ??? pic.twitter.com/A8j02MeEmD

Tyga making that 'when your about to lose your sugar momma' face pic.twitter.com/2QBSKWlGEd

This Tyga look is when his sleeping and you going thru his phone because you suspect something and then he starts moving and turning pic.twitter.com/NWbFLRlVGF

While some are focused on Tyga’s horrified visage, there are others who are praising Tyga for “upgrading.”

Tyga went ahead & made that upgrade ? pic.twitter.com/8fbUYd3Kdo