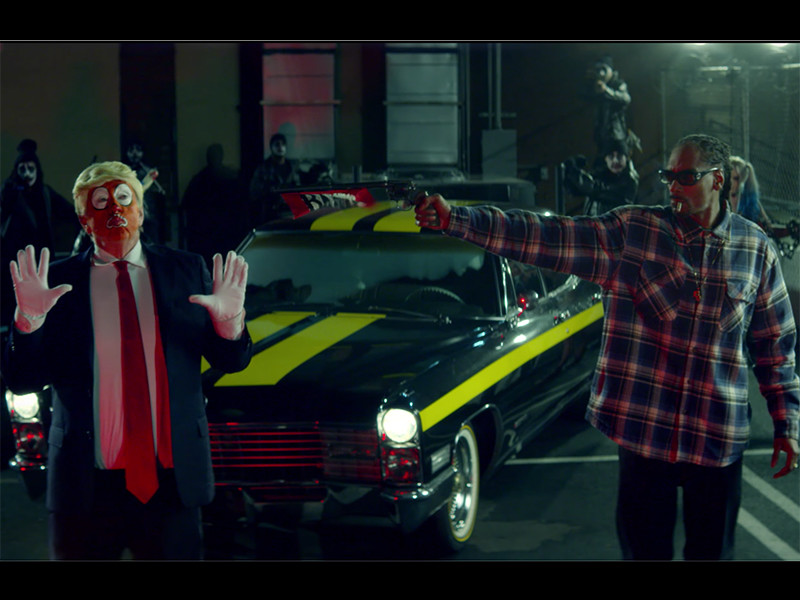 Director Of Snoop Dogg "Lavender" Video To Trump: "It's Just A Prank Bro"

Following the release of the video for the remix BADBADNOTGOOD’s  “Lavender,” Trump sent out a Tweet responding and mentioning the D O Double G, even @-ing him and attacking his “failing career.”

Co-director of the video Jesse Wellens tweeted at Trump before the president commented on the video, and then again after the controversy erupted.

It's just a prank bro @realDonaldTrump

I think I made some people a lil upset. It's just art?

Speaking with Billboard in an article that was published on March 12, Wellens said the nation’s current political climate inspired the video.

“I just had been seeing this go on in the world politically, and I actually was a cop for six years in the military, so I can kind of see it from the cop’s point of view too,” Wellens said. “When I originally wrote the idea of the video, the video of [Philando Castile] getting shot came out online and it was causing riots. We just kind of wanted to bring the clowns out, because it’s clownery — it’s ridiculous what’s happening. As America, it just doesn’t seem like we’re very respected right now.”

“Oh my god. People are so triggered. This is a short about clowns. Its a whole other universe. If you pay attention when you watch it you might understand. Here is a hint ‘Context” Tell me what you think the message is?”

In the same feature article from Billboard, Snoop Dogg called the video right on point.

“The whole world is clownin’ around, and [Jesse’s] concept is so right on point with the art direction and the reality, because if you really look at some of these motherfuckers, they are clowns,” Snoop said.

“When I be putting shit out, I don’t ever expect or look for a reaction,” he added. “I just put it out because I feel like it’s something that’s missing. Any time I drop something, I’m trying to fill in a void,” he says. “I feel like it’s a lot of people making cool records, having fun, partying, but nobody’s dealing with the real issue with this fucking clown as president, and the shit that we dealing with out here, so I wanted to take time out to push pause on a party record and make one of these records for the time being.”